OMAHA (DTN) -- In a lawsuit filed Monday, the state of Nebraska asked a state court to order AltEn LLC to take actions to correct multiple environmental violations at the company's ethanol plant near Mead, Nebraska.

The state wants the court to order AltEn to properly dispose of pesticide-contaminated byproducts, including wet distillers grains and wastewater, from the 24-million-gallon plant to comply with state statutes and permit conditions and to pay penalties of $10,000 per day per violation of the Nebraska Environmental Protection Act.

AltEn had until Monday to remove distillers grains piles from the property. Nebraska Attorney General Doug Peterson said during a news conference on Monday that the action had not been taken even though the company had one year to do so.

"To me, this is one of the clear cases of a corporation coming in and failing at being a good partner with environmental standards that we have in Nebraska."

On Monday, Nebraska Gov. Pete Ricketts said Macy was not allowed to attend the meeting because the lawsuit was in the works.

"This is a company that is terribly managed and has demonstrated that consistent lack of compliance with the directions of our environmental laws and our Department of Environment and Energy," Ricketts said.

Macy said his department has followed the process set out by state law in dealing with environmental concerns at AltEn.

AltEn did not respond to DTN's request for comment.

The state's lawsuit lays out a long timeline of actions taken to seek compliance from the company: https://ago.nebraska.gov/….

"I understand that many Nebraskans have been frustrated by this ongoing situation, and our need to hold confidential and privileged enforcement information until this case could be filed," Macy said.

"We've heard your concerns. We take those seriously. We will continue to use all the tools at our disposal to protect Nebraska's health and the environment."

When the plant opened in 2007 under previous ownership, it was considered to be a crown jewel of environmental stewardship, a glimpse of the promise of a renewable energy future and an economic development tool for the village of Mead.

Now, the plant faces an uncertain future after a series of environmental violations has turned the plant into a community hardship.

After the plant shut down, thin stillage and manure was detected more than 4 miles downstream to the southeast of the plant after a pipe burst in a plant digester during a major cold snap (https://www.dtnpf.com/…).

The plant originally was designed to produce energy by combining manure collected with thin stillage from the adjacent 30,000-head Mead Cattle Company. The hot-liquid mixture was decomposed inside an anaerobic digester, where bacteria extracted methane-rich biogas that is used to fire the plant's ethanol boilers.

When AltEn took over ownership, it was permitted to produce ethanol using field corn as its primary feedstock. However, AltEn used discarded pesticide-treated seed corn rather than normal field corn.

The plant has three lagoons that hold contaminated wastewater.

The state ordered AltEn to dispose of all the contaminated distillers grain and address the contaminated wastewater, but "AltEn has failed to adequately do so," the state said in a news release.

"AltEn has consistently missed deadlines and failed to complete actions required by NDEE to fix the environmental problems at the facility. The stockpiles of distillers grains and the poorly maintained lagoons present an ongoing threat to the environment."

Nebraska is the second-largest ethanol-producing state in the country behind Iowa, with 24 total operating ethanol plants.

Ricketts said the situation in Mead is not representative of the state's ethanol industry.

"Obviously, ethanol is an important industry here in our state," he said.

"We've got a lot of operators. All the other operators are working with Department of Environment and Energy on a regular basis, but this one is one of those ones that is not, and so it does not represent the ethanol industry in the state of Nebraska, as they are the ones that are mismanaged and not following the directions." 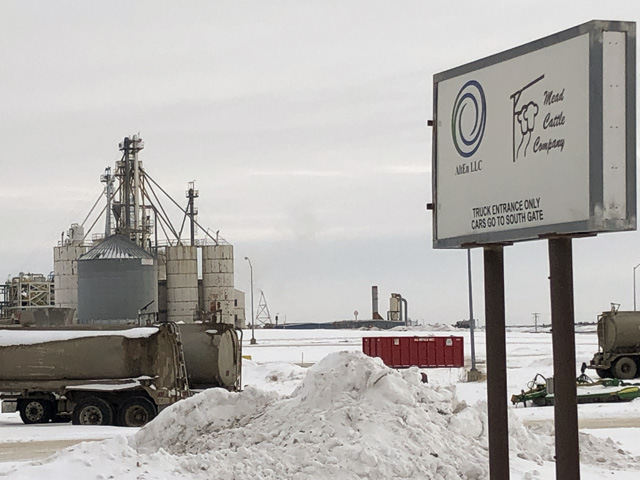