ANKENY, Iowa (DTN) -- The world will lose about 250 million crop production acres by 2050, according to estimates from the Food and Agriculture Organization of the United Nations.

The possibility of losing the equivalent of roughly two-thirds of the cultivated land in the United States is alarming, said Jerry Hatfield. But the director of the U.S. Department of Agriculture's National Laboratory for Agriculture and the Environment in Ames, Iowa, believes it can be prevented.

If society doesn't do a better job making land-use decisions and taking care of the soil, Hatfield is afraid hunger and food insecurity will be much more prevalent in 30 years when the world's population is expected to top 9 billion.

"If we look at the projected needs for food, feed and fiber, the productivity per unit of land is really going to have to increase," Hatfield said. "To improve the stability of agriculture production going forward, we will have to improve and protect our soils."

The American Farmland Trust (AFT), a non-profit organization committed to the protection of farmland, released "Farms Under Threat: The State of the States" earlier this year. The multi-year study identifies farm and ranchland acres lost to development and ways to protect it.

From 2001-2016, 11 million acres of agricultural land were paved over, converted or fragmented, according to the study. Roughly 4.4 million acres were classified as "nationally significant," or the best land for food and crop production. About 2,000 acres of farm and ranchlands are developed per day, data indicates.

"The threat to farmland is real," said John Piotti, AFT president and CEO. "Our data provides unprecedented insights into the nature of the threat states face. The report is about getting farming right before it's too late."

Hatfield said city planners need to rethink how cities are built, going more up than out, even in smaller communities. And using land less suitable for agriculture instead of paving over rich, black soil.

Find a recent Progressive Farmer article about the benefits and challenges of farming in and near rapidly growing urban areas here: https://www.dtnpf.com/….

Maintaining and improving acres suitable for grain, vegetable and fruit production should also be a point of emphasis, Hatfield asserted. Extending crop rotations, adopting no-till or conservation tillage, planting cover crops to extend the biological activity of the soil and water infiltration and adopting conservation measures to mitigate soil erosion are just a few proven ways farmers and landowners can help, he said.

"If all these things work together, we can preserve highly productive agricultural land," Hatfield said.

Fred Yoder, a farmer from Plain City, Ohio, is also co-chair of Solutions from the Land, a national farm advocacy group. The group is at the forefront of resolving food system, energy, environmental and climate challenges facing agriculture.

Yoder farms 1,800 acres about 20 miles west of Columbus, Ohio's rapidly growing state capital. Instead of revitalizing areas of the city that need it, he says developers push outward into farm country.

The mayor of Plain City, which is near Columbus, has asked Yoder multiple times to voluntarily annex 400 acres he owns on the east and west side of town to make it easier to develop. He's refused so far.

"I said I make my living here, and I want to farm," Yoder recalled, understanding that may change if a financial offer for his land is made someday that's too good to refuse. "We're losing land right and left to urban encroachment. We need to stop, pause and look ahead.

"The answer to urban sprawl is to maintain resilient soils," he continued. Yoder does that by planting cover crops and no-till farming.

The group will act to double permanently protected farmland by 2040 and reduce the rate of conversion by half by 2030 and by 75% by 2040. It's establishing the National Agricultural Land Network, a nationwide network of land trusts and government entities focused on protecting agricultural lands, to help meet the goals. It will also continue to advocate for stronger state and federal land protection policies.

"AFT is taking action but we can't do it alone," Piotti said. "We (all) need to take action." 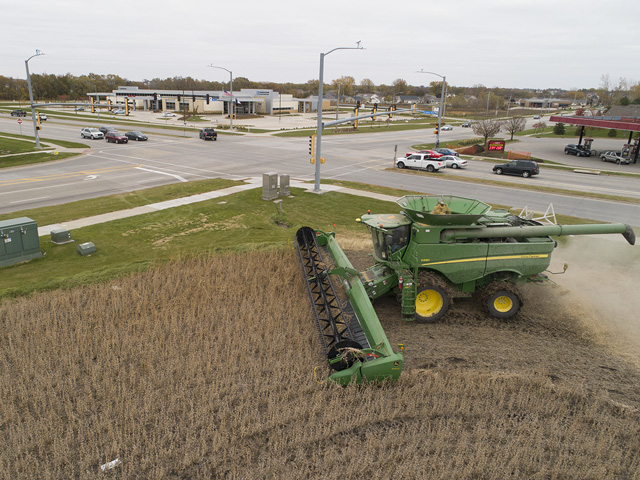