INDIANOLA, Iowa (DTN) -- The coronavirus has forced farmland brokers to get creative.

Typically they're busy setting their fall auction line-up this time of year, but now they're also having to take local rules on the size of permissible gatherings into account, said Murray Wise, with Murray Wise Associates, a national ag real estate marketing and auction company headquartered in Champaign, Ill.

In Ohio, for instance, gatherings are limited to 10 people, including auction employees, which limits the benefit of a public auction.

"So, now interested buyers are given a password to go online to a dedicated website and get information about the farm for sale," Wise said. "Then, they submit a one-shot written bid for any of the tracts, individually, any combination of tracts or the total property."

The buyer has to fill out a contract, bid submission form and a check for the earnest money, said Eric Sarff, vice president of Murray Wise Associates.

"Like ordering online for curbside pickup, the written, one-time bid method requires more work on the part of the potential buyer," Sarff said. "Basically, we are distilling an auction down to the final bids and most interested parties."

Sarff said the method has been successful, although it lacks the nervous excitement and adrenaline rush of an in-person farm auction.

"The 'one chance, sealed bid' sale method is a blend of an auction -- because it forces action by a certain date -- and a private sale, since it is discrete and private," explained Doug Hensley, president of Hertz Farm Management and Real Estate Services, based in Nevada, Iowa. "We've had several farm sales this summer like this and it's proven to be an effective method."

Randy Dickhut, senior vice president, real estate operation at Farmers National Company, based in Omaha, Nebraska, said it's another tool farmland brokers are using amid the coronavirus pandemic. His company is still holding a few public land auctions in places that allow them, such as Kansas, Nebraska and Iowa, "with social distancing, of course," Dickhut said. "It depends on the location, what's allowed and the potential buyers. We've also had simultaneous online auctions, some strictly online sales and traditional private treaty sales."

The coronavirus pandemic paralyzed the market from late March through May, Hensley said.

"But that, typically, is a slow time for farmland sales anyway because the focus in agriculture is planting a crop." By June and into July, the market started to more fully function, and going into August, a normal growing season contributed to expectations for stable values and perhaps more land for sale resulting from postponed spring sales, Hensley noted.

However, the devastating derecho windstorm that flattened row crops and crumpled grain bins across millions of acres in central Iowa and northern Illinois may make some farm owners change their minds about selling, Hensley said.

"The market is so neighborhood specific. Every 15 miles is a little different," said Hensley. "One neighborhood could be well off, but if you go 25 miles away, they might be impacted by a disaster, and buyers will sit on their hands."

Dairy areas continue to struggle, Dickhut said. "But, in general, we've not seen many distressed sales. Those sales often happen outside the market, where the owner will sell to an investor and lease back the farm," he said.

In Wise's 40-plus years selling farmland, he said has never seen such a limited amount of productive farmland available for sale.

"The past five to six months, it's like a Mexican stand-off with potential sellers standing around with their hands in their pockets," Wise said. "A lot of people who thought they wanted to sell land looked at the 2.5% to 3% return they were getting on farmland compared to a mere 15 to 20 basis points return on Treasury bills and said, 'We'll keep the farmland for now.'"

Even though crop prices are low, farmland still is an attractive, safe investment.

"We have never seen interest rates at levels we're seeing now. Never," said Hertz's Hensley. That makes long-term capital investments attractive. "And while every other asset class has gone through roller-coaster gyrations the past four to six months, farmland has stayed stable."

There aren't many attractive alternative investments, agreed Wise. Retail buildings have lost their luster as more consumer sales shift to online shopping and the work-from-home business model has made office buildings less desirable.

What this means for potential farmland buyers: "Don't expect a bargain, even at these low crop prices," advised Wise. "Farmland values remain steady." 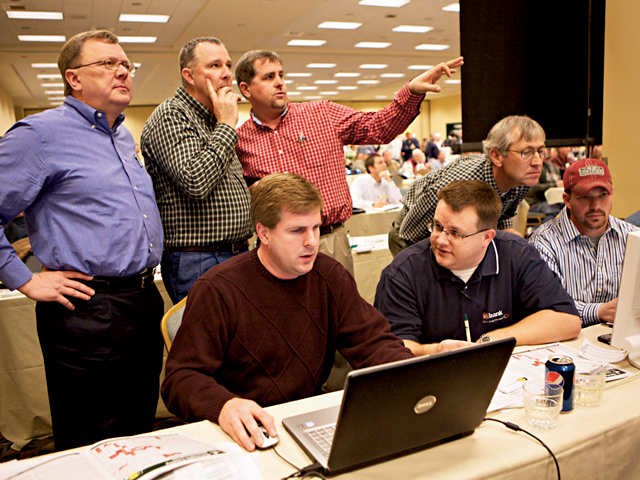