HOUSTON (DTN) -- When ClearFlame Engines CEO B.J. Johnson told ethanol industry representatives about the potential ethanol market for the company's all-ethanol diesel engine, those at the recent National Ethanol Conference in Houston could have kissed him.

While concerns continue about the future of the Renewable Fuel Standard and whether the EPA will provide a 15-billion-gallon market for ethanol in light of small-refinery exemptions, Johnson said even an optimistic 20% market penetration into the $231 billion heavy-duty diesel market would in itself create 15 billion gallons of demand for ethanol per year.

"Why has it not happened? Ethanol is considered a gasoline additive. The solution? Get ethanol to burn in a diesel application. We're able to get a diesel engine to burn ethanol. We take the diesel engine design and implement it into a high-temperature combustion system.

"We're not fundamentally changing the design. No one has to give up the diesel-engine design. This is running on straight ethanol."

But cleaner alternatives like spark ignition lack the performance required in many heavy-duty applications. ClearFlame's engine, Johnson said, is the only option to provide both high performance and low emissions.

"Demand for diesel fuel is not going anywhere for decades," Johnson said.

Johnson said the technology could help the ethanol industry gain even greater access to markets in states like California, which plans aggressive measures to reduce smog-producing emissions by as much as 90% in years to come. In addition, the technology can dramatically reduce soot emissions.

Johnson pointed the case of truck and engine manufacturer Navistar. The company had control of 77% of the diesel-engine market until 2009.

"Navistar failed to meet 2010 emissions regulations and as a result they saw their market share plummet by 96%," he said.

"This demonstrates the existential threat that emissions regulations pose to diesel engine manufacturers."

One of the biggest hurdles in gaining market access is educating the public about how ethanol can be used in ClearFlame's technology, he said.

Johnson and co-founder and Chief Technology Officer Julie Blumreiter are graduates of Stanford University, and started ClearFlame based on work from their dissertations. The Chicago-based company received $25,000 in seed money from Ag Startup Engine at Iowa State University Research Park in 2019. 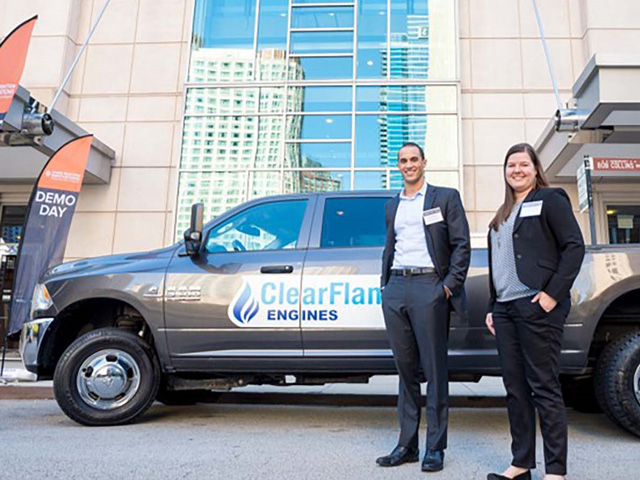