AMES, IOWA (DTN) -- Jason Webster isn't about to forget the rough-and-tumble 2019 crop season, but not for the reasons you think. Instead, the agronomist and head of Precision Planting's Technology Institute prefers to apply the experiences to improve production practices.

"It was a challenging year, but it gave us an opportunity to learn a few things," said Webster during Precision Planting's Winter Conference this week. Farmers, agronomists and Precision Planting premier dealers attended the event at the company's headquarters near Tremont, Illinois. The event was also televised to 10 locations in the U.S. and Canada, including Iowa State University in Ames, Iowa.

During the meeting, Webster highlighted several 2019 agronomic trials from the company's 320-acre research farm near Pontiac, Illinois. "Profitability is on everyone's mind going into 2020. We're focusing on trials that made the most money and cost us money," he said.

"This year, by far, the biggest thing that cost us was planting in tough conditions," Webster said.

Seed went into the ground on April 26, May 7, May 20, June 5 and June 10 for the planting date study. Soil conditions were cold and wet during the two earliest dates, but were optimum on May 20. Corn planted on May 20 averaged about 230 bushels per acre (bpa), while the April and early May dates averaged 67.4 and 57 bpa less, respectively.

The lesson learned last year was mudding in corn needs to be avoided if at all possible, Webster noted. It prevents timely, uniform germination and root development that puts plants at a disadvantage from the start.

"We got crushed pushing planting conditions," he said. "It cost us nearly $250 (per acre)."

Alex Recker, an Arlington, Iowa, grain farmer, hopes to avoid that wet, delayed scenario this spring or at least speed up his planting system. He's considering adding Precision Planting's vSet seed metering system, vDrive (an electric drive that replaces mechanical systems to power seed and other meters) and SpeedTube to his 2014 John Deere DB 60 24-row planter. SpeedTube allows planting speed to increase from an average of 5 mph to 8 mph, increasing acres planted per hour by 50% on a 24-row unit.

Extreme weather events make it tougher to get crops planted in a timely manner. "I like the idea (of SpeedTube) ... but we don't have a tractor big enough to pull that fast yet," Recker said.

He added Precision Planting's DeltaForce -- a hydraulic cylinder that automatically controls downforce to row units to ensure all seeds are planted at a uniform depth to promote even emergence -- to his planter in 2018 and the Conceal liquid fertilizer system last year. He said his corn yields jumped by 6 bpa by banding 10 gallons of 32% UAN (urea-ammonium nitrate) and 5 gallons of 12-0-0-26 ammonium thiosulfate per acre at planting.

"Being wet and cold last year, we could definitely see the advantage," Recker said. "We look forward to using it again."

A simple $25 saturated cold germ test of seed corn per lot number is one idea that could pay off for farmers, Webster said. However, a Precision Planting poll indicates less than 20% of farmers take advantage of this test. Seed is placed in 100% saturated soil at 50 degrees for seven days, then transitioned to 77 degree soil for four days, which simulates a grower planting in both cold and wet soils.

Since seed companies typically only provide warm germination information, Webster said testing for cold and wet tolerance is a good idea given the past and predicted spring conditions.

Precision Planting research shows the success of corn and other crops is tied to getting seed in the ground at the right depth, adequate moisture, uniformity and keeping the furrow clean. Proper seed-to-soil contact, among other things, is also paramount.

Some Precision Planting products designed to improve placement include:

-- The 20|20 display is the heart of Precision Planting products. The in-cab monitor can collect yield data and information for planter settings and it powers other equipment to control seed population, downforce, liquid fertilizer and other planter functions.

-- SmartFirmer measures soil temperature, moisture and residue in the furrow in real time.

-- SmartDepth allows farmers to change planting depth manually or from the cab utilizing the 20|20 display so seeds have proper moisture to germinate. For example, research shows optimum soil moisture is 30% for corn and 10% for cotton.

-- FurrowForce is a new closing system that preserves moisture and seed-to-soil contact while preventing compaction. It utilizes a sensor automatically adjust downforce of the closing system. The first stage uses notched wheels to close the furrow by shifting soil inward. Next, stitch wheels firm the soil around the seed to the proper density in order to maintain moisture after planting.

Mark Daggy is looking to increase revenue on his 732-acre grain operation near Humboldt, Iowa, by transitioning to organic farming. He's also considering long-term equipment investments, like upgrades to his 16-row Case-IH 1250 planter. He has a 20|20 display and DeltaForce was installed two years ago. The company claims incorrect downforce can cost corn farmers up to 16 bpa.

Daggy's plan is to add SmartFirmer, the CleanSweep residue management system and FurrowForce to the planter to hopefully boost yields.

"I'm a long-term investor. I think farmers need to be," Daggy said. "My dad, even in the 1950s and '60s, said you have to plant into moisture," which SmartFirmer can assist with.

"The seven most expensive words in business: 'we have always done it that way,'" he said. 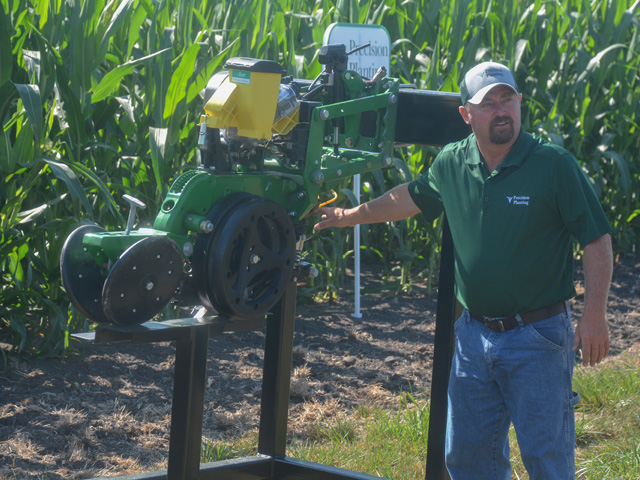