ALTOONA, Iowa (DTN) -- Biofuel producers and farmers continue to have a general distrust of EPA's handling of small-refinery exemptions to the Renewable Fuel Standard, but a USDA official said on Thursday the agency's new approach should help alleviate concerns.

Speaking to an audience of farmers and biofuel producers at the Iowa Renewable Fuels Summit in Altoona, Iowa, U.S. Deputy Secretary of Agriculture Stephen Censky said the EPA's decision to account for waived gallons by using U.S. Department of Energy recommendations for 2020 was a good start.

The Trump administration has taken heat for a disparity between a deal brokered with Midwestern lawmakers last fall and the approach adopted by the EPA in the final rule.

Agriculture interests insist the deal included using a three-year rolling average of gallons waived between 2016 and 2018, or about 1.35 billion gallons. The EPA approach uses a DOE-recommended average of about 700 million gallons.

"I realize some folks would have preferred that EPA used the average of the past three years," Censky said. "It doesn't matter whether EPA is projecting 1.4 billion gallons (in exemptions), or if it is projecting 600 million gallons, as long as the eventual number of waivers don't exceed projections."

The EPA currently has received 21 requests for exemptions for 2019.

Between 2016 and 2018, the EPA granted 85 small-refinery exemptions totaling more than 4 billion ethanol-equivalent gallons that were not blended with petroleum.

"Having EPA committed that it will be following DOE is actually very good," Censky said.

Although farmers and biofuel producers continue to call for more transparency from EPA about why refining companies receive exemptions, Censky said chances are information will continue to be withheld because of concerns about releasing confidential business information.

Censky said the signing of the phase-one trade agreement with China that includes provisions supporting U.S. ethanol and distillers grains exports to China, the U.S. Senate passage of the U.S.-Mexico-Canada Agreement, and the removal of a Japanese tariff on ethanol imports from the United States, will bolster USDA efforts to expand biofuels trade.

The China agreement, he said, is "going to be spectacular for our farmers and ranchers. It has structural reforms to barriers that have been in place for years."

China has committed to purchasing $80 billion in agricultural commodities, which include ethanol and distillers grains in the next two years. However, Censky said USDA would be "monitoring China's purchases very closely."

By most measures, 2019 was a historically bad year for biofuel producers. But the leader of the Iowa Renewable Fuels Association told producers it was time to repair the industry's relationship with the EPA.

Doubts about President Donald Trump's biofuel policies hit a crescendo on Aug. 9, 2019, when it was reported Trump ordered the EPA to grant 31 more waivers despite an outcry from farmers and biofuel producers to fix the program.

Then, on Dec. 19, 2019, the EPA finalized the rule to use DOE recommendations to account for exemptions going forward.

"Yes, the biofuels and ag community were frustrated on Dec. 19, but that frustration has slowly evolved into focus on the work to be done in 2020," IRFA Executive Director Monte Shaw said during a speech at the summit.

"I think that starts by trying to rebuild some type of working relationship with the EPA. Speaking for myself, I'm ready to try. I want to try to work with EPA to take steps, small and large, that can rebuild some trust. I think the question is, does EPA want to do that?"

Even though 2019 was a difficult year for agriculture and biofuels, Shaw pointed to what he said were positive developments.

The EPA approved the sale of year-round E15, Congress passed a five-year extension of the biodiesel blenders tax credit, and progress was made on the trade front.

In addition, Shaw said, although the industry disagrees with EPA's approach on small-refinery exemptions "it did create a path forward."

If the EPA follows through with its promise to require the blending of 15 billion gallons of ethanol with gasoline in 2020, Shaw said, it would be the first time in years that this has been accomplished.

"It's hard to believe, but every year from 2014 to 2019 the congressionally mandated RFS levels have been undermined by either illegal general waivers under the Obama administration or abuse of refinery exemptions under the Trump administration," he said.

"There has not yet been a year when the 15-billion-gallon RFS was truly implemented at 15 billion gallons."

Renewable Fuels Association President and CEO Geoff Cooper said in a keynote speech during the summit that last year was unlike any other for the industry.

"What made 2019 such an especially frustrating year is that our policy and regulatory wins were often overshadowed by new obstacles and unexpected setbacks," he said.

"At every turn, it seemed our hard-fought victories were eclipsed by new impediments and a general sense of malaise and cynicism in the marketplace."

Cooper offered predictions for 2020 and on into the next decade. He said more states would continue to develop low-carbon fuel standards, a "thawing" trade war with China would lead to "vigorous" growth in U.S. ethanol exports, and E15 would become the "standard" gasoline blend across the country.

"We know refiners are already working to recast the post-2022 RFS into something that limits the use of ethanol and other biofuels and fails to drive further growth," he said.

"We can't let that happen. That's why we are redoubling our efforts to ensure the RFS remains intact as the transformative and growth-oriented program Congress intended it to be in 2023 and well beyond." 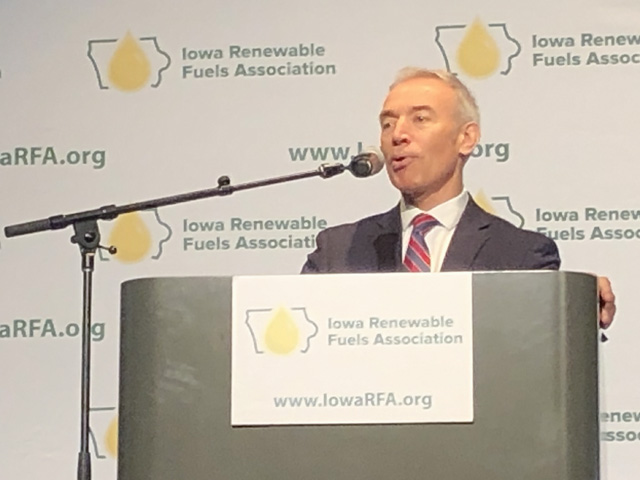