ROCKVILLE, Md. (DTN) -- The 2019 crop season has had just about everything thrown at it -- so why not add a little irony to the list?

After a spring of continuous, slow-moving, widespread storm systems that flooded fields and stalled planting, many farmers now find their crops are in need of, well, a little more rain.

"Drought stress shows up fast in both the sandier soils, where there's no root development to speak of, due to lots of early moisture, as well as the clay zones, where there's poor root development due to planting into wet conditions," noted Ontario, Canada, farmer Dan Petker. "We'll need half-inch to 1-inch rainfalls every week to 10 days in order to maintain the crop -- and a nice, warm September to get the corn crop even close to where it should be."

That wish list was echoed by most of the DTN Agronomy Advisers, a group of trusted farmers and ranchers who report on their crops, livestock and current events in agriculture each month. Most are busy managing their late-planted crop fields for a growing number of insects and diseases, as well as tending to prevented planting acres. In the background, a volatile grain market plays out, as the industry casts about for answers on the production potential of this unprecedented crop season.

Crop development is the biggest issue moving forward, the Agronomy Advisers agreed. With a scorching heat wave in the rearview mirror in the Midwest, corn and soybeans got a surge of growth, but still lag far behind normal.

On Monday, USDA estimated that a little over one-third of the U.S. corn crop was silking -- roughly half its normal pace of 66%. Likewise, 66% of soybeans are usually blooming this week, but the 2019 bean crop has only reached 40%.

These reproductive phases require a lot of moisture, particularly in corn, Petker noted. So it was no surprise that Agronomy Advisers from Iowa, Kansas, Michigan, Minnesota, Ohio and Ontario all noted the need for rainfall in their fields.

"It's been very hot," said Kyle Krier, of central Kansas. "We went from record rainfall to now badly needing a rain. There's nothing in sight in the forecast, either."

Only two Missouri farmers felt good about moisture levels -- if only briefly -- as storm systems had dropped some rain in the state over the weekend. "We've had a three-week stretch of hot and dry, but we had 1.25-inch rain on Saturday that probably saved the corn crop from being a total disaster," noted Kyle Samp, of north-central Missouri.

Farther east, however, southern Illinois farmer Josh Miller continues to fight the floods. "It has rained about 3 inches in the last 24 hours and it's still pouring," he reported glumly on Monday. "We still need to plant about 400 acres of beans."

Growers are starting to battle the usual summer invaders -- weeds, bugs and diseases -- all of which pose more of a threat than usual to small, late-planted fields.

Japanese beetles are shimmering in fields in Missouri, and western bean cutworm moths are busy laying eggs in the Great Lakes Region. Many Agronomy Advisers opted to treat their fields with fungicide this year, as environmental conditions have favored many foliar diseases. In southeast Iowa, Mike Berdo is watching weed escapes with some alarm. "We're seeing lots of potential weed resistance in these later-planted beans," he said. "We are hopeful that the cooler temps this week will help the effectiveness of the chemicals."

As if tending to a variable and late-planted crop wasn't enough work, some farmers are also juggling management of empty fields.

"My main concern is the lack of our crops this year," Miller said. "We took many prevented planting acres, which doesn't really cover the full cost of the bills. And the planted crops are small and extremely late, so no bumper yields there."

Despite USDA's effort to incentivize cover crop use on unplanted acres this year, many Agronomy Advisers reported that tillage and herbicides will be their primary management strategy. Krier is making herbicide passes on his empty acres in Kansas, and Minnesota farmer Jeff Littrell said his recent road tour of the Midwest showed a lot of "burndown and disking."

Only Raymond Simpkins of southeastern Michigan reported that he plans to sow oats on some of his unplanted acres.

"Crop health will be tied to weather more than normal, I think," Birdsell noted. Samp is bracing for quality issues on his corn, including low test weight and possible mycotoxins. His winter wheat harvest has already introduced him to the quality problems, with the appearance of vomitoxin and sprouting.

In Michigan, Simpkins is watching fall forecasts warily. "I'm not sure there will be enough time for corn and some very small beans to make it," he said.

In the meantime, growers are riding the daily rollercoaster that is the grain markets, as the industry flails around for meaningful crop production estimates. Catching the market's highs is especially tough this year -- rather like surfing while blindfolded.

"My main concern right now ... is hitting these markets before they crash, but also giving them a chance to run due to all the uncertainties, and the ongoing tariff situation," Peters explained.

"I think we'd all like to have a little clarity on harvestable acreage and yield prospects, particularly on corn and beans here in the U.S.," added Arkansas' Williams. "The lack of clarity has really made marketing interesting."

Some were doubtful that traders really have a handle on just how sub-par this year's corn and soybean production could be. "I think the real numbers this late fall, early winter might scare us all," Littrell said. "It's not good out here. In a 750-mile drive, I've seen at best a tough crop -- and the only one to blame is Mother Nature." 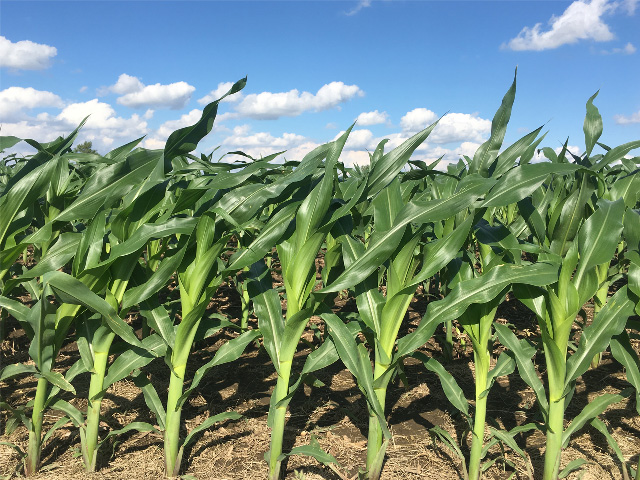