ROCKVILLE, Md. (DTN) -- Making the call to leave some corn and soybean acres unplanted this spring will be a tough decision on its own -- but what comes next can be equally difficult.

Ask Kyle Samp, who was forced to file prevented planting claims on half of his soybean acres in 2015. He and his father planted and managed cover crops there that summer and raised a solid corn crop the following spring, but not without some bumps in the road.

"Make sure you talk to your agent and know exactly what you can do, before you pull the plug on that crop," Samp advised. "Start making plans on where you go from there -- what you want to do next spring."

For those growers who opt not to plant a second insured crop and instead take a full prevented planting payment, weed control and soil protection should be your top goals for the rest of 2019. Cover crops are a popular option to accomplish these goals, but supplies are tight for some of the most popular covers, so the sooner you can make a plan and order seed, the better, industry experts told DTN.

Here's a road map on the agronomic decisions ahead:

Start with an inventory of what inputs have been applied to the prevented planting acres in question. Herbicide applications, particularly those that include residual herbicides, can limit what you can plant on these acres for the rest of the year. "The one saving grace this year is that many people are so delayed they haven't even turned a wheel yet -- there's no burndowns or residuals out there," noted Ohio State University Extension weed scientist Mark Loux.

If that's not the case for you, these resources can help you figure out how your herbicides may interact with any future forage or cover crops:

-- Research from the University of Missouri on the effects of herbicide carryover on cover crops: https://weedscience.missouri.edu/…

-- Research from the University of Wisconsin on common herbicide and cover crop interactions, including covers used as forage for livestock: https://fyi.extension.wisc.edu/…

If you end up selecting cover crops, knowing what nutrients have been applied to the field is also important, noted Keith Berns, co-owner of Green Cover Seed, based in Nebraska. Agronomists and crop consultants can help you select covers that can manage and sequester the nitrogen or nutrients you've already applied -- or add them to the soil, if needed.

"The No. 1 thing I'm recommending is to talk with your insurance agent right off the bat, before you make any decisions on cover crops," said Abbey Wick, an Extension soil health specialist with North Dakota State University. Growers who take a full prevented planting payment cannot hay or graze their acres before Nov. 1, nor can they plant a second, insured crop on those acres for harvest. Depending on your insurer's definitions, an insured crop can include some common cover crop options such as wheat, barley or oats, if they are planted field-wide in a monoculture, Wick said.

"Make sure what you're planning on planting will definitely qualify as a prevented planting cover crop," she said. "And keep detailed records of what you do."

See more details on what can and cannot be done on prevented planting acres from the USDA's Risk Management Agency here: https://www.rma.usda.gov/…

It may seem crazy to look ahead to 2020, when the 2019 planting season is still slogging along at a historically slow pace. But what you want to do with these acres in the future will determine the best management right now, Wick and Berns noted. Are you planting to corn next spring? Soybeans? Are you able to terminate a cover crop in the spring? Or would you rather it die over winter? Are you prepared to manage any residue?

"The biggest question is often how do you handle your nitrogen," Berns said. "If you're going into beans, I would go with cover crops that are much heavier in grasses -- like cereal rye -- that gives you more biomass, residue cover and they will tie up nitrogen longer. If you're going into corn, you might try to get peas, vetch or winter lentils, a legume or some oats even."

Samp got a memorable lesson on both the benefits and challenges of managing cover crops in 2015. Hoping to provide some erosion protection, control weeds, and scavenge the phosphorus and potassium he had already applied to his lost soybean acres, the Samps planted alternating strips of tillage radishes and field peas. Both grew well and died overwinter, as planned, and their following corn crop thrived -- but not without an agronomic scare called fallow syndrome.

Corn relies on certain mycorrhizae, fungi that grow on the roots of plants, to absorb key nutrients like phosphorus. When a field is fallowed or planted to a crop that doesn't support these organisms, the next corn crop can struggle to take up nutrients, resulting in stunted, yellowed or purpling plants. Many covers, particularly grasses, do support these mychorrhizae. Brassicas, like the tillage radishes the Samps planted, do not.

"Where the radishes were, the corn looked terrible," Samp recalled. "We thought it was going to die." In severe cases, fallow syndrome can cause significant yield loss, but the Samps got lucky. "We ended up with those sections only being four to five bushels off of 200-bushel corn," Samp said. "2016 was a good growing season and if the crop had continued to see stress, it would have been a different story. Guys really need to talk to an agronomist or find some university research before they make decisions (on prevented planting acres)."

Thanks to a continued rise in cover crop use, dwindling hay stocks, and the growing possibility of millions of prevented planting acres, cover crop seed supplies will likely be tight this year.

"There are going to be supply issues for sure," Berns cautioned. "If you're going to do cover crops and you wait until July or August to order, especially for warm season crops like millets, cowpeas and sorghum sudangrass, it's going to be a problem."

Cereal rye production last year was much lower than normal, which means cover crop seed companies will mostly rely on the current rye crop, some of which was delayed by the cold spring and is still weeks from harvest. "So seed may not be ready until mid-to-late August instead of mid-to-late July," Berns noted. "Our growers say things look good, so supply will be better than last year. But demand might be higher, so the end result is we might still come up short."

Speak early and often to seed suppliers and keep it simple, Wick added. "Plant only what you're comfortable with," she said. "You can get pre-made mixes, but often there will be cover crops in the mix that some farmers are not familiar with. The last thing we want is farmers planting a bunch of cover crops that they aren't comfortable managing and having a bad experience."

For more help on which cover crops can address which field needs, from weed suppression to nitrogen fixation, see this article by Berns: https://www.greencoverseed.com/…

Regardless of whether you use cover crops on your prevented planting acres, weed control must be a priority, Loux said. If you do plant covers, try to plant into a clean field, Berns stressed. "Cover crops can do a great job suppressing weed emergence and growth, but they can't kill weeds that are already there," he noted.

If you're leaving that ground fallow, budget for at least two passes with tillage equipment or herbicide applications to keep your fields from becoming a weedy seedbank for years to come, Loux said.

"Many people don't realize how big weeds can get, and how fast, in a fallow situation, with no crop to compete," he said. "It's going to take multiple trips."

Many winter annuals have already gone to seed and died, and summer annuals like waterhemp, Palmer amaranth, foxtail and giant and common ragweed are now growing. Some of them can emerge throughout the growing season and produce tens to hundreds of thousands of seeds per plant. "You don't have to kill everything -- you just have to keep it from going to seed," Loux noted.

Mowing a big field of mature weeds at the end of the season is not ideal, he added. Not only are you sowing weed seeds, but you're leaving a mat of thick weed residue that will be difficult to manage in the fall and spring.

Tillage implements can also struggle against thick, mature weeds. "When you have big, thick stalks, they start going around the tillage implement or just getting bent and surviving," Loux said. If you're relying on tillage, he recommends doing an initial herbicide pass when weeds are smaller, to clean up fields as much as possible before a second pass with tillage equipment later in the summer.

Chemical options may also be limited, especially since many corn and soybean herbicides are not labeled for fallow field use, Loux added. See more details on your chemical control options from Loux here: https://agcrops.osu.edu/…and from the University of Illinois here: http://bulletin.ipm.illinois.edu/… 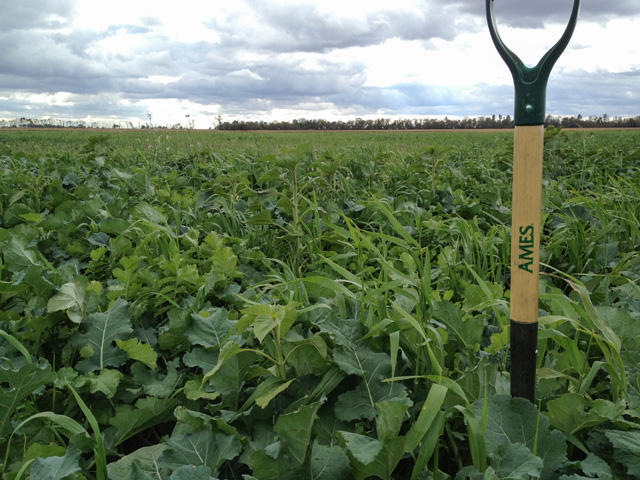