Some growers are switching intended soybean acres to corn, or at least thinking about it. Usually the opposite happens in mid- to late-May if corn isn't in the ground yet. That's because corn planted any later is likely to lose yield potential.

Decade-low soybean prices and a re-energized U.S.-China trade war convinced the former Iowa Corn Growers Association president and his family -- Dave farms with his brother, son and nephews -- to plant another 1,000 acres of corn this spring at the expense of the world's most popular legume. Now, 4,000 of the 6,500 acres the family crops will be corn.

Dave piloted a tractor pulling a 12-row planter May 13 in a field near Meservey, Iowa, as other family members planted elsewhere. He seeded corn in a field intended for beans. Dave's nephew, Josh Nelson, incorporated fertilizer and pre-emergent herbicide in the same field ahead of the planter.

It's the first time in nearly 50 years of farming Dave Nelson reduced soy acres in favor of corn with June fast approaching.

"The market is telling us to switch," Dave said as he planted corn. "Soybean prices have gotten worse, and a trade deal with China doesn't look like it will happen for a while. The profit potential for corn isn't good, but it's a lot better than soybeans.

"Illinois, Missouri and the Dakotas are way behind, and we're able to plant," he added. "That may help corn prices."

Big U.S. soybean ending stocks and a recent setback in trade negotiations with China contributed to the lowest prices since 2007, according to DTN market analysts. The latest government estimate pegs the nation's soy stockpile for 2019-20 at 970 million bushels, bolstered by China's reluctance to buy from the U.S.

November soybeans opened at $8.43 Tuesday, with cash prices less than $7.70 at many elevators and processors. Iowa State University (ISU) estimates the break-even price for soybeans averaging 62-bushels-per-acre at $8.86 per bushel.

Planting less soy in favor of corn may be a good plan for some farmers, said Todd Hubbs, University of Illinois agricultural agronomist. Given current market dynamics and planting woes in much of the Corn Belt, he said farmers that can get corn in soon and possibly limit yield losses due to delays could benefit.

"I can see that strategy making sense in Iowa, and possibly other areas," Hubbs said. "There could be a significant amount of corn that isn't planted nationwide, possibly 3 million acres, which may support prices come June."

About 79 million acres of soybeans and more than 71 ma of corn were unplanted as of May 12, according to prospective planting estimates and the latest USDA Crop Progress Report. Rains and cold weather hampered planting throughout major corn and soybean states this past week.

Only 11% of Illinois' corn is in the ground compared to the five-year average of 82%. Indiana is 6% done and North and South Dakota are 11% and 4% finished, respectively.

Iowa is better off with 48% of its intended corn acres planted, four days behind last year and just over a week behind the five-year average. The planting clock is ticking loudly.

Iowa farmers failed to hit the 50% corn planting completion threshold for this time of year only five times prior to this year in the last 40 years. In each of those years, the statewide yield was below trend line.

Dave Nelson hopes to break the trend. The family is more than half-done with corn. If they get yields 180- to more than 200-bpa, and prices jump 30 cents, they can make a profit unlike on soybeans.

"Some of the fields we're switching raise a lot better corn," he said.

The thought of planting soybeans and losing money is dejecting, Josh Nelson added. There wasn't a debate among the family members about swapping soy acres for corn.

"It's shear economics," Josh said. "Planting soy just didn't pencil out. A lot of farmers are in a similar boat."

He may be right. Several ISU Extension regional agronomists mentioned during a recent conference call that many farmers statewide are swapping some soy acres to corn, according to Mark Licht, ISU Extension cropping systems agronomist.

High yield potential for corn is still possible by planting well-adapted full season hybrids up until June 1, Licht said. After that date, he recommends switching to earlier maturing corn.

"Agronomically speaking, it's easier to switch to corn from soybeans," Licht said. "It usually doesn't happen because of yield potential."

For more information on late corn planting, see the Purdue University publication "The Planting Date Conundrum for Corn" at https://www.agry.purdue.edu/…. 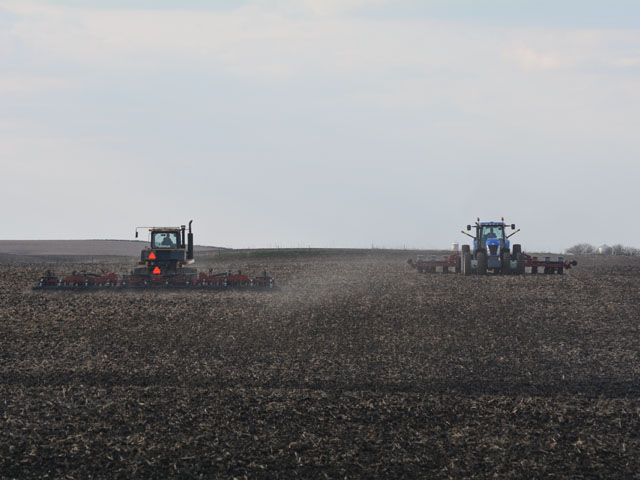