Conserve soil, conserve water. Both go hand-in-hand on Steve Stevens' farm, near Tillar, Arkansas. A third-generation farmer on land that's 10 miles from the Mississippi River and 2 miles from the Arkansas River, Stevens has seen plenty of changes during his time here, and not all for the better. He's determined to improve the land to make it more productive.

To meet his goals, Stevens is focused on water, specifically rainfall as well as irrigation.

"To be sustainable, we have to capture more rainfall so we're not as dependent on underground water. That will also be sustainable for our aquifer," Stevens said.

Fifty years ago, groundwater was only about 20 feet from the surface. Today, it's 55 feet. That's a huge concern for Stevens.

"When a well is 100 to 115 feet here, you're getting close to the bottom. I asked our well driller what to do next. He said, 'There ain't no next.' At that point, we can't afford the well or the motor or the fuel," Stevens said.

A serious drought in 1980 was the turning point for water in the area. "If you had water, you made a crop, and prices were good, so you made some money, too. After that, wells went in big-time to irrigate as close to 100% of the fields as possible," he said.

Irrigating is great, he said. Not wasting a drop of that water is even better. A decade ago, he began using polypipe furrow irrigation with the PHAUCET program that advised on computerized hole sizes and scheduling. Setting it up was time-consuming. He spent many late nights at the computer working out flow rates from each well and turnrow elevation.

It was time well spent. The program that first year alone saved him as much as $100,000 in pumping costs.

His concerns grew with the amount of water pumped from the aquifer by area farmers, however. At the same time, he was bothered by criticism of cotton farms along the Mississippi River for adding to the dead zone in the Gulf of Mexico with nutrient runoff from fields.

Stevens was determined to keep every drop of water possible in place on his farm. That way, he'd lose little soil to erosion and get the best possible use of the water, too.

He also wanted to prove his actions were making a difference. "Our water drains to Lake Village to Chicot on to the Gulf. I wanted to see, 'What does a Delta cotton farm do to hypoxia? Can we make a difference?'" he said.

He signed up for the Arkansas Discovery Farms Program, through the University of Arkansas. The program monitors water quality in runoff from 12 farms ranging from poultry production to row crops. It finds ways to reduce nutrient loss as well as soil loss and provides best-management practices for each farm.

The best part for Stevens is that the program provides a measurement of what's happening in the fields. His agronomic program was already making a difference. Planting no-till into the thick mat left by a cereal rye cover crop not only saved soil but also increased water infiltration, boosting the crop through dry spells.

The Discovery Farm Program placed soil moisture probes at 6, 12, and 18 inches deep to monitor water movement. "They found that our water efficiency was 90% compared to an average of 50% in this area. Nitrogen (N) and phosphorus (P) runoff was less than 3%, even less than their model. So, we can apply N, P, K, sulfur and boron when the crop is using it, and put it in the root zone," he said.

"We can put 2 inches of water into the soil profile in an irrigation where we'd get less than half that before. How much water does it take to produce a bale of cotton? Not nearly as much as it used to on this farm."

"For years, we've been telling farmers that they're farming the top 6 inches of soil. Farming behind cereal rye, that became 15 inches or more, pulling water and nutrients from deep in the soil to support the crop," Robertson said.

It's Stevens' second effort with no-till. "We tried no-till in the 1990s. We went to a stale seedbed, and the planting window was about three days from too wet to too dry. With cereal rye, you stop the moisture drain. If you get rain, you hold it," Stevens said.

Combining the high-tech furrow irrigation with planting no-till into standing cover crops puts Stevens closer to that goal of capturing every drop of water for use by the crops. "We can manage the irrigation better and make a good crop in a dry year. We can cut back on the number of times we irrigate, which saves pumping costs."

Robertson said Stevens' system provides yields equal to any other system but reduces cotton production costs 6 cents per pound. "It's as good for soybeans as for cotton," Stevens said.

What he's doing is still a neighborhood curiosity. Drivers stop alongside the road to peer at cotton and soybeans popping through a thick mat of cereal rye thinking the crop is doomed to fail.

Seeing the water and soil savings turned Stevens into a bit of an evangelist for the program. He believes all farmers have to do their part to conserve water and soil.

"The whole idea behind what I'm doing is to try to get information out so more growers can see this and say, 'I could do that.' We must conserve these resources now in my career so this farm can be passed on to my children and grandchildren," he said.

"We have to keep our minds open. I keep learning little things about it every year. We tried planting the crop into wheat at first but had problems with water standing in the field or running off. That isn't going to work. Cereal rye roots open up the soil structure and make the whole thing work."

It's good to verify that there's little nutrient and sediment runoff, but Stevens is still working on tweaking the system to improve.

"We have found that 80% of our nutrient runoff is caused by rainfall, not irrigation. We've also learned that most of that extra soak cycle of irrigation runs out of the field, so we don't do that now," he said.

"We had a lot of questions and got a lot of answers, but still have questions about how to get better. These are typical fields for this area, nothing special, nothing different about them. This land we're farming was mostly put together by my dad, then I added to it. We get great information from University of Arkansas research. By being a Discovery Farm, we can deal directly with researchers, and we've been part of their research projects for many years."

Curiosity is key to scientific work, and Stevens remains curious about improving his farm.

"It isn't just what makes it better, but also why. The 'why' is important. I'm a pilot and like to get up in my Seneca II airplane, a light twin-engine plane, and see things I can't see from the ground. I look at my fields and other farmers' fields, and I'm amazed what I can see from the air. This land is feeding and clothing the world, and we have to take good care of it," he said. 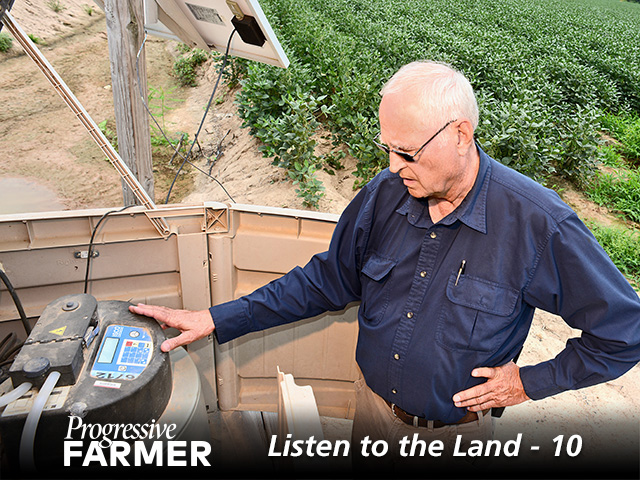