As a teenager, Donavon Taves would spend hours thumbing through Popular Science magazines looking for new and interesting things to do, build or experience. Years later, the same curiosity was still strong when he heard about a different way of farming that had both environmental and financial benefits.

"It was about being a better steward in the public eye. Something clicked," Taves recalled. "It was a rabbit I wanted to chase."

The dream began to crystallize into a serious, whole-farm practice when Taves met then-NRCS (Natural Resources Conservation Service) conservation agronomist Ray Archuleta. Archuleta's approach was "about spending more time learning about soil structure and the critters that reside in the soil, and how to feed them with cover crops," Taves explained.

After watching a few of Archuleta's demonstrations at a seminar, "it became clear that the way I was farming was wrong, and I wanted to do it differently," said Taves, who farms corn and soybeans in northeast Louisiana.

One of those demonstrations, a soil slake test, showed Taves how easily poor soils dissolve in water versus soils that have more organic matter and pore space. "It showed me that rain will tear poor soils apart, and topsoil will end up in streams and bayous," Taves said.

During the demonstrations, which can be found on YouTube, Archuleta explained, "When you start doing tillage, bacteria will start breaking down all the glues that hold soil particles together, and the pore spaces collapse. In most of our watersheds, we have an infiltration problem, not a runoff problem."

At the time, Taves' black gumbo soils were tough to deal with, not only for Taves but for creatures traversing his fields. "When we had the sticky clay soil, I would see turtles get so balled up that they would get stuck and die."

Archuleta's advice for Taves was to introduce no-till and cover crops into his operation. Taves had tinkered with cover crops previously through EQIP (Environmental Quality Incentives Program) but failed in the attempt, mostly because of lack of experience. "I planted wheat. The bugs got into it and completely destroyed it the first year, so I had nothing but a bitter taste," Taves pointed out.

Archuleta urged Taves to instead use a diverse mix of species for a cover crop. That did the trick, and before he knew it, Taves was learning soil biology concepts he had never considered before. "On the top side of the soil, you need short plants and tall plants to accommodate a diversity of life; but on the underside, you need shallow root systems and deep root systems," Taves pointed out. "You want a diverse mix of microbes underneath just as you do with critters above the soil surface."

It was a Popular Science moment for Taves. "Here was a method where we can actually improve the productivity and the overall health of our farm in the off months," he said. "That was the wow factor to me. Work on your farm during the growing season, let the microbes do the work in the winter."

Eventually, Taves began to notice his heavy black soil was taking on a cottage cheese consistency, "which happens over time with no-till and cover crops when you allow surface residue to self-decompose," he explained. Other changes were taking place, as well. Soil held his equipment a lot better, and he didn't need a lot of attachments for his planter.

Taves added that crop yields may not necessarily increase because of soil-health practices, "but with the decreased input costs, we seem to have a little more money left over at the end of the year."

He counts input savings due to fewer trips, reduced irrigation and lower chemical costs. "When you do not disturb the soil, you'll still have some weed pressure, but not nearly as much," Taves said. "Many of the weed seeds are decomposing in the soil or on the surface. With no-till, you're also reducing germination of weeds."

Taves grazes livestock on cover crops on about 30 acres close to his home. It's a win-win soil-health practice, he believes. "The farmers who are really seeing an increase in yield from soil-health practices are grazing the split-hoof animal. It's mimicking nature, going back to the days of old where the buffaloes roamed. That's where you saw the perfect soils, when animals were incorporated into the system. You're adding the green manure, and you're fattening up some cattle."

His focus on sustainable farming practices has Taves looking at identity-preserved crops, marketing them as having been grown with concepts and practices friendly to the environment. "The farm is an ever-changing landscape," he added. "Never be complacent. Always strive for something better."

Taves is also a Master Farmer, which dovetails nicely into the soil-health movement. The Louisiana Master Farmer Program "is not about how to grow more product," Taves explained. "It's about an environmental approach where you must address and take care of the environmental issues on your farm. It's a win-win for the public, for tax dollars and the producer."

Ernest Girouard, the coordinator of the Louisiana Master Farmer Program, guided Taves through the intense and tedious process. "It is an eye-opening experience for those who want to manage their farms more closely at the ground level," Taves said.

The enhanced water-holding capacity of a healthy soil often allows Taves to delay irrigation, which saves money. "The bottom line is that a healthy soil soaks up and banks that water. Plant roots go down deeper in the summer to tap into that water bank where we have stored water."

There's an environmental benefit, too, he continued. "If your water is not running off, you're holding your nutrients on your farm, whether you've paid for those nutrients or are growing them on your own through cover crops and soil health. Overall, the environmental impact of a healthy soil is wonderful for the public."

And, Taves added, it has been good for turtles, too. 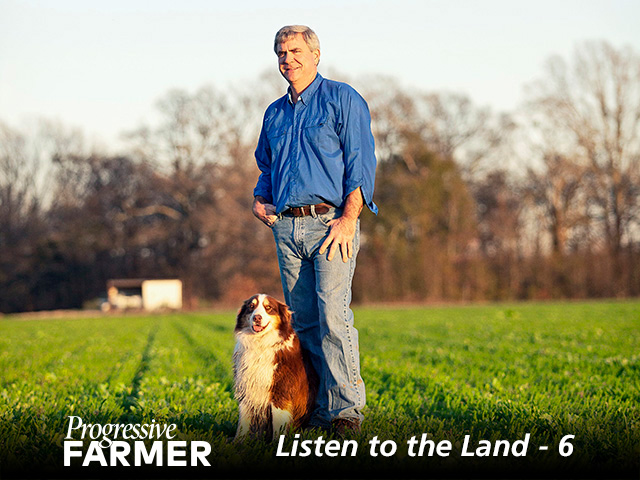