ORLANDO (DTN) -- While the future of ethanol may reside in the development of a national high-octane fuel standard, finding consensus among petroleum producers, automakers and ethanol producers may be difficult.

For starters, there is disagreement over an appropriate starting point for an octane standard -- either 95 or 98 research octane number, or RON. The research octane number is the most common type of octane rating worldwide. If done the right way, the ethanol industry could gain significant market demand with such a standard because ethanol is the least-expensive octane source available. Increased biofuel demand would, in turn, drive demand for corn.

A General Motors representative told industry leaders at the National Ethanol Conference in Orlando, Florida, on Tuesday that GM wants to see a legislative fix to remove all barriers to setting a national high-octane standard.

Dan Nicholson, vice president of global electrification, controls, software and electronic hardware at the GM Global Technical Center, said, without legislation, all the various stakeholders would continue to fight for their own victories without coming together.

What's more, the future of high octane would be at the whim of an ever-changing EPA, to take administrative actions to move toward a national octane standard, he said.

"All of our elected officials want and expect us to work this out," Nicholson said. "Isn't a market-based approach better?"

He called on the ethanol industry to be engaged and to work with the auto industry and others.

"We believe 95 RON for all vehicles is the solution," Nicholson said. "All automakers would get behind this right now. Future high-octane vehicles will not be flex vehicles. They will be vehicles requiring high-octane fuels. The risk is high of squandering our opportunity."

The ethanol industry has been advocating for a RON standard of 98 to 100, which would require higher ethanol blends to achieve.

"Ninety-eight as a base fuel is a bridge too far," Nicholson said.

"I would love to see an opportunity for us to move more statutory legislation that moves infrastructure," he said. "In the short term, I don't think a legislative fix is possible. Congress is dysfunctional today and somehow we've got to change that. Until then, we need to remove regulatory hurdles."

Daschle, who is considered in the ethanol industry to be one of the founding fathers of the Renewable Fuel Standard, said he believed in a budding industry back in 2000 when he and former Sen. Dick Lugar, R-Ind., introduced the first bill to propose a renewable fuel standard. The first RFS became law in 2005, essentially catapulting the modern ethanol industry.

"There is a growing consensus that we're at another crossroads of enormous impact to everyone in this room," Daschle said. "We are urgently in need of taking it to the next level. We can do it by removing barriers to mid-level blends. EPA has the authority. I don't think we need a legislative fix to take out regulation."

GM is calling for an octane rating of 95 RON to start, Nicholson said, because it would take time for the auto and refining industries to expand infrastructure.

"Changing the nation's fuel supply will not happen overnight," he said. "We encourage you to work with legislators. We must keep going. It's up to you to step up and be vocal. The automotive industry is going through a transformational change. One might think the refiners don't need to change anything in production because they are producing 95 RON."

Once a national standard is set, Nicholson said, it would take three to four years to redesign and begin changing the vehicle fleet.

"We need assurances the fuel will be there and will be mandated," he said. "We're not going to do things to facilitate higher blends without payback."

A national standard of 95 RON would require a 7% increase in fuel production annually, Nicholson said.

"The refining industry does not have the capacity," he said.

In addition, Nicholson said there aren't enough mid-level ethanol blends produced to contribute to a 98 RON standard. He said a pursuit of 98 RON would cause rising costs to consumers.

On Nov. 27, 2018, a U.S. House of Representatives committee held a hearing on proposed legislation to replace the RFS with a high-octane standard. Biofuel interests came out opposed to the measure, which was put forward by Rep. John Shimkus, R-Ill., and Rep. Bill Flores, R-Texas.

On the day before Thanksgiving, Shimkus and Flores released what they are calling a "discussion draft" of a bill that essentially would phase out the RFS in 2023 and eliminate a mandate requiring the blending of biofuels altogether.

In addition, the EPA administrator would be required to set volumes on advanced biofuels to be blended at the prior year's production volumes of cellulosic ethanol, biomass-based diesel and other advanced biofuels.

The current law mandates the increased blending of a variety of biofuels through 2022. The actual production volumes of cellulosic ethanol and other biofuels, however, have not come close to reaching the mandate. The current RFS law was designed to set a course for 36 billion gallons of biofuels to be blended by 2022. The discussion draft bill would not mandate the use of biofuels at all.

Biofuel interests generally support the move to a 95 RON requirement at the pump. However, industry representatives told the committee the move wasn't bold enough. Some suggest a move to 98 RON would provide a better incentive for high-octane fuels such as ethanol.

At the time, Renewable Fuels Association President and CEO Geoff Cooper said studies show that setting a 95 RON would harm the ethanol industry. Instead, the RFA is advocating for a 98 to 100 RON. 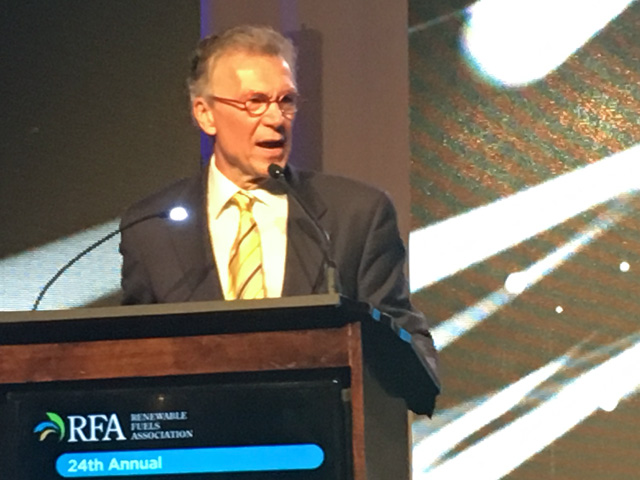