OMAHA (DTN) -- Scott Pruitt is out as EPA administrator after the embattled agency head tendered his resignation to President Donald Trump on Thursday.

Trump made the announcement via Twitter on Thursday afternoon: "I have accepted the resignation of Scott Pruitt as the Administrator of the Environmental Protection Agency. Within the Agency Scott has done an outstanding job, and I will always be thankful to him for this. The Senate confirmed Deputy at EPA, Andrew Wheeler, will...on Monday assume duties as the acting Administrator of the EPA. I have no doubt that Andy will continue on with our great and lasting EPA agenda. We have made tremendous progress and the future of the EPA is very bright!"

After Pruitt's resignation takes effect on July 6, Wheeler will assume his role as acting administrator on Monday.

For those keeping an ethanol scorecard on the change at EPA, Wheeler worked for Sen. Jim Inhofe, R-Okla., for six years, serving as the U.S. Senate Committee on Environment and Public Works staff director and chief counsel. Wheeler has lobbied for a number of different industries in Washington, most notably coal interests. The committee's primary role is overseeing the EPA. Inhofe has been a longtime critic of the ethanol industry.

Pruitt's tenure as head of the EPA featured both the good and the bad for farm country.

Pruitt's EPA is in the process of rewriting the waters of the United States, or WOTUS, rule. The 2015 rule was widely unpopular in the Corn Belt, where farmers and ranchers expressed concern the agency was attempting to expand its regulatory reach.

On the flip side, Pruitt's handling of the Renewable Fuel Standard has been somewhat confrontational. The agency granted an unprecedented number of small-refinery waivers to the RFS, totaling 2.25 billion gallons in lost biofuel demand in 2016 and 2017. All the while, Pruitt's EPA had put the RFS timeline back on track in releasing proposed volumes on time.

On Thursday, the price of renewable identification numbers spiked on news of Pruitt's resignation. The market for 2018 D6 ethanol RINs jumped by 6 cents, and 2018 D4 biodiesel RINs were 4 cents higher on Thursday.

Sen. Charles Grassley, R-Iowa, said the president made the "right" decision. Despite complaining of Pruitt's missteps with the RFS, Grassley had stopped short of calling for Pruitt's resignation.

"Administrator Pruitt's ethical scandals and his undermining of the president's commitment to biofuels and Midwest farmers were distracting from the agency's otherwise strong progress to free the nation of burdensome and harmful government regulation," Grassley said in a statement Thursday afternoon.

"Fewer things are more important for government officials than maintaining public trust. Administrator Pruitt, through his own actions, lost that trust," Grassley said.

Iowa Republican Gov. Kim Reynolds said Pruitt's resignation is an opportunity for the administration to install new leadership at EPA that is committed to renewable fuels.

"I will continue to fight for a robust Renewable Fuel Standard by working with our federal delegation in Washington, D.C., to hold the administration to this promise," she said. "Iowa farmers deserve nothing less."

"For the past year, Scott Pruitt had been waging war against the Renewable Fuel Standard, the biofuels industry, and the millions of farmers and rural Americans who helped Donald Trump get elected," Dinneen said. "It appears these missteps finally caught up with Mr. Pruitt, who apparently thought that RFS stood for 'refinery first strategy.' Mr. Pruitt's failure to follow President Trump's directive to remove the red tape that restricts E15 from being sold in the summertime likely played a part in his demise, and the straw that broke the camel's back may have been Mr. Pruitt's recent proposal for 2019 RFS requirements that failed miserably to repair damages done to our nation's farmers and biofuel producers.

"So, that sound you hear is a collective sigh of relief coming from the Midwest."

A number of environmental groups were giddy at the news.

Jamie Rappaport Clark, president and CEO of Defenders of Wildlife, said, "Wildlife should be dancing in the streets. Mr. Pruitt was bad for the environment and bad for wildlife. He will not be missed."

Wenonah Hauter, executive director of Food and Water Watch, said Pruitt's "self-enriching antics actually stood out. Pruitt's systematic attack on the EPA itself, his devotion to polluting industries, and his disdain for American public health and environmental protections made him an unfit leader of the agency."

Environmental Working Group President Ken Cook said Pruitt would go down in history as "a disgrace to the office of EPA administrator. He will forever be associated with extraordinary ethical corruption and the abuse of power for petty personal enrichments."

In addition to angering the ethanol industry and farmers with actions taken on the RFS, Pruitt faced a number of ethical investigations, including his travel habits and a number of other scandals. 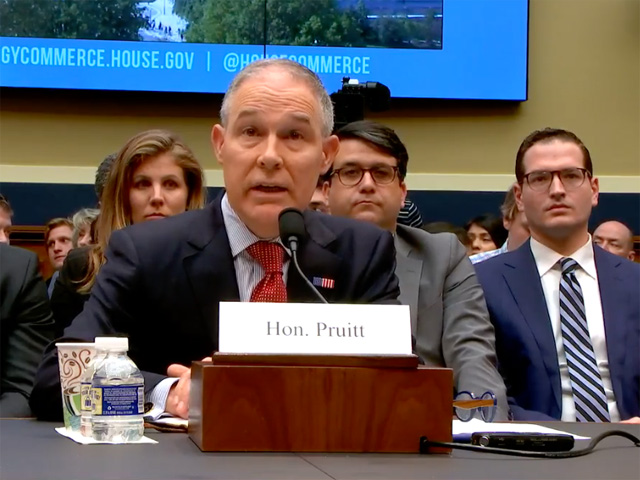