The last four years have been a trudge of low commodity prices, political upheaval, trade concerns and seesawing weather. At the center of it all, one asset -- farmland -- has come away looking practically bulletproof. Are some cracks finally starting to show?

It's a bit early to infer that an uptick in farmland listings is an important indicator, but it's notable, Randy Dickhut, senior vice president of real estate operations for Farmers National Company based in Omaha, Nebraska, and an accredited farm manager. Through the first quarter of 2018, Dickhut said the company saw a 50% increase in private-treaty farmland listings compared to year-ago levels. A lot of that activity was in Iowa, Nebraska, Michigan and North Dakota. Farmers and ranchers, he noted, are still by far, the biggest percentage of buyers, with 80% to 90% of property sold going to local operators.

Does the fact that Farmers National Co. is marketing more land mean the ag industry is seeing forced sales at this point? "Not on any large scale," Dickhut said. "It's true, there is some of that happening. From what we've seen, however, there aren't many total farm sales or liquidations. The exception would be in some of the dairy areas, where there is more financial stress.

"In the Grain Belt, we are seeing a few financially encouraged sales, as well," he added. "Whether it's the owner making that decision or the lender, we don't know. On the whole, though, we are still in a market where there is not an excessive supply of land. So, prices should maintain."

Farmers National Co. specializes in agricultural land sales and management. They use both auctions and private-treaty sales. Auction volumes, Dickhut added, are mostly level when compared to 2017, but with a slight downturn in price on some properties, on average less than 5%. Lenders, he noted, are confident with where the land market is now pricewise, but they are also continuing to be conservative.

"We are all aware that the value of farm real estate owned by crop and livestock owner/operators is very important. The USDA reports that 83.5% of the overall asset value in agriculture is tied up in land. Having that higher value provides economic stability during periods of tough cash-flow. To put it simply, land values help the balance sheet," he explained.

The balance sheet for many producers has a little more red ink on it this year, according to Tanner Ehmke, manager at CoBank Knowledge Exchange. He points to USDA reports that show another 1% increase in total U.S. farm debt year over year. Low commodity prices, Ehmke said, have many farmers leaning hard on lenders to stay in the game.

"The story here is how the debt is broken out," he noted. "When you look at what is going on, farmers are continually buying land. Farm debt attributed to real estate is continually increasing. We are at a record high on that, at $239 billion, and at an all-time high as a percentage of total farm debt going all the way back to 1960.

"If you break out the numbers, you see working capital continues to decline because farmers don't have cash. In addition, you find net farm income is depressed. Debt loads are rising, however, largely due to that real estate debt. So, producers are going into debt to buy land, not necessarily due to operating loans."

The USDA adds in a recent report that while debt numbers look big for the farm sector, when adjusted for inflation, the picture is more positive. For example, farm sector debt will fall almost $3 billion (0.8%), and real farm-sector assets will also drop by about $6 billion (0.2%).

Taking on long-term debt, which can bolster an operator's equity position down the road is not necessarily a bad strategy in today's economic environment, Ehmke said. "Some of those farmers who have cash reserves or credit available to them have gone on a real estate buying binge. They're willing to take on debt in many cases, and they are doing it in anticipation of a return to good times."

They may be exactly right, Purdue University's Craig Dobbins said. At a time of gloomy price forecasts, the economist seems cautiously optimistic about the next 12 months.

"We may be in a situation where commodity prices are lower than we'd like them to be, and margins are smaller. But, in the commodity business, it's always a toss-up between price and costs. That's the way this business is."

Dobbins said unless the economy gets much worse than it is today, the industry is not yet at a negative tipping point. The opposite may well be true, with those producers who have used the downturn as an opportunity to grow, emerging as big winners.

"Good producers continue to make changes all the time," Dobbins noted. "Through this downturn, we've seen costs moderate. Cash rents are down in many areas, fertilizer prices have fallen some, and fuel costs are lower. People find ways to be more efficient. It's true, we don't have wide profit margins, but bad weather somewhere in the world could change the whole picture."

CoBank's Ehmke agreed and added that he's closely watching a handful of farm-economy reset buttons as the season progresses.

Let's start with interest rates, Ehmke said. "That's a concern. The yield on a 10-year treasury note is now at 2.77%. Two years ago, it was 1.7%. If interest rates continue to climb, we'll likely see land values soften, and that may make it more difficult for borrowers."

R. D. Schrader, president of Schrader Real Estate and Auction Co., added that not only are higher interest rates going to be an important variable moving forward, but how they are raised and what happens with inflation are also going to be key.

"Historically, land has been a good hedge against inflation," Schrader explained. "As it appears we may be moving toward more of an inflationary period, it will be interesting to see how that impacts the agricultural land market. I think if the Fed has to raise rates in a fast manner to combat inflation, it won't be positive for land values. But, if increases are slow, methodical and incremental, the market will adjust."

Chapter 12 bankruptcies are another key indicator. Ehmke expects to see these accelerate throughout the remainder of 2018.

"We are not up to the levels we were in years prior, but where those numbers break is something to consider," Ehmke said. "We could see a lot of stress in areas like Wisconsin and Kansas, likely due to problems in dairy and wheat. Those industries are under a lot of stress, and that is likely to continue. More people in those segments of ag will have to reorganize their operations."

He added that for many producers, record yields have been a blessing and something that will keep them in the game another year. If commodity producers move to more trend-line average yields in 2018, that coupled with rising interest rates could force more reorganizations or even liquidations.

At press time, there were several trade issues at stake, most notably the North American Free Trade Agreement (NAFTA). Uncertainty here was adding to market volatility, and Ehmke said it was a clear priority to maintain ag agreements with Mexico and Canada.

"There are other important bilateral agreements, too, that, while they don't affect major partners, are very important. We are going to see growth in Asian markets, for example, and we need to have a competitive stand there. "We seem to take three steps forward, five steps backward, in our approach to trade. Worst-case scenario is the undoing of agreements, which leaves the market having to find a place to put all of this production," Ehmke said.

Ehmke also said the market will find a place, but it won't be at a price producers will be happy with. He stresses higher transportation and other logistic costs will come into play if commodities are marketed outside of trade agreements.

"We will have to accept a lower price to make our product more attractive through less-efficient export channels. In this scenario, it's true lower prices might stimulate more domestic demand, but we can't consume all we export. We just can't make that ground up domestically."

Taken out of context, any one part of the farm economy could paint a broadly negative picture. But, what if the economic tip is to the positive side, not the negative? The consensus, for now, seems to take that positive bend.

Schrader, with more than 20 years' experience in the ag land market, said there's no doubt there is financial pressure on the farm economy right now. He believes the land market is a good gauge of the economy and notes it's been surprisingly resilient.

"I'd have to say land values are stronger today than last fall. Yes, there is some additional land on the market. Some operators are selling land due to financial pressure. But, there are a lot of people in healthy financial positions in agriculture today. While some producers tended to leverage most everything they made the last few years, others saved. They are giving the market stability and buying land when they see the right opportunity," Schrader said.

Schrader agrees with Dickhut that farmers are still the majority of buyers. And, he admitted even after all these years, he's a little surprised at what a strong linchpin land has been for the farm economy.

"There are a lot of variables to talk about with the farm economy, but I can honestly say I had no expectations that land values would be stronger today than last fall. Yet, I'm seeing evidence of that. I believe it's the truth of where we are today. It gives you confidence in the farm economy and maybe a little less confidence in the idea of projections or negativity relative to all that's going on," he said.

Ehmke explained that farmers who see today's economy as an opportunity to expand need to do it smartly.

"Make the best decisions for your operation with input from your lender or accountant. There are opportunities out there no doubt. We know interest rates are rising, and it may be good to take advantage of cheaper rates now. But, don't do things in a way that puts you at risk for the future. There's no major recovery in the cards for commodity prices projected anytime soon, barring some sort of catastrophe. I wouldn't say this is a bad time to build your operation, but I would say it's a bad time to get overleveraged doing it," Ehmke said. 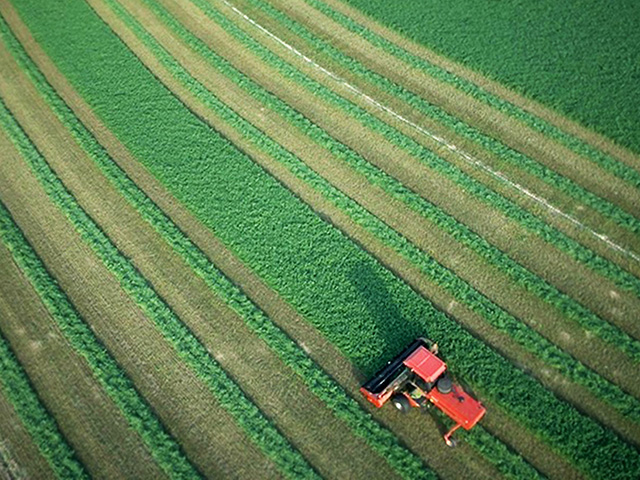