Gerald Gauck of east-central Indiana crossed the finish line on May 12. To his west, John Werries parked the planters on May 2, and is admiring the view in central Illinois.

"The corn all came up very evenly and looks beautiful," he told DTN. "The planters farmers have now do an amazing job of spacing. The stands truly look like a picket fence."

"We are probably three weeks behind planting from when we wanted to get planted," Jay Magnussen reported from the damp fields of northwest Iowa. "Time and summer weather will tell if this is an issue for us this year."

These farmers are among a group of producers whom DTN periodically surveys throughout the season for its Fieldwork Roundup stories. Known as DTN Agronomy Advisers, these farmers and ranchers report on fieldwork, crop conditions and other issues facing agriculture.

GROWERS RUSH TO THE FIELD

Where he farms in southwest Indiana, Scott Wallis was wrapping up planting, as well. "The area is probably 75% to 80% done in corn 50% to 60% done with beans," he told DTN.

Planting isn't the only game in town, of course. A cool, wet April pushed many fertilizer and herbicide applications deeper into May, leading to a crush of work for local co-ops, retailers and commercial applicators. The backlog is especially acute in Minnesota, where USDA estimated farmers planted nearly a third of the corn crop last week alone.

"Corn is 25% done [and] could be more if fertilizer would get here," said Justin Honebrink, who farms in central Minnesota. "The co-op is busy, so I am assuming everyone else in the area is also."

The frenzy of planting and fieldwork in surrounding states makes the stalled progress in parts of the northern Midwest even more frustrating for farmers there.

In north-central Iowa, snow kept farmers out of the field in April, and May hasn't been much kinder, with spotty deluges keeping fields too damp to work, said Jim Cronk. "I suspect, as a whole, only 20% done with corn, no soybeans planted, and not much for pre-emerge put on either," he said of the region's progress.

Farmers in his area are preparing to switch to earlier-maturing hybrids, Cronk said. "I think there is going to be a shortage, though, in my area of 100-day-and-less corn -- some people will be forced to plant late maturities," he said. The delayed season will push many farmers to plant around wet holes in the field, he added. "We'll have a lot of patchwork fields to harvest this fall, I believe."

In southeastern Michigan, Raymond Simpkins has received 6.2 inches of rain since May 4 and is bracing to switch out corn for soybeans soon. "Little to no corn is planted in the lower two tiers of counties in Michigan," he said. "I have not turned a wheel as of May 16th. June 1st we will be switching to soybeans regardless."

"The weather pattern over the next couple weeks is looking favorable for most crop areas, even the Northern Plains and northern Midwest where planting progress has been the slowest," he said. "A big feature is that south-central Canada upper-level low pressure is moving east and northeast, and away from influencing conditions over the north-central U.S. This change in the upper-air pattern will allow for a warmer trend to form, with heavy rain systems also less likely to occur."

In northern Iowa, dry weather has been so scarce that some growers have abandoned their weed control plan and prioritized planting, Cronk noted. "A lot of guys planted when it was dry before fertilizer or pre-emerge herbicide was put on," he said.

Weed control is a top concern for Magnussen in northwest Iowa as well. "Marestail continues to get worse and worse every year in our no-till fields," he said. "Hopefully, our 2,4-D and early season dicamba applications do a good job of getting things cleaned up."

Even in parts of the Midwest where growers had time to spray their burndown and pre-emergence herbicides, weeds are a top concern this year, Indiana's Wallis noted. "Waterhemp and dicamba moving off target will be in my thoughts all season," he said.

In Illinois, Werries has staved off problem weeds with a yearly commitment to residuals, a weed program with three modes of action and long-term use of cover crops.

Cover crops are on the mind of central Ohio farmer Keith Peters this spring, too, after torrential rainstorms in his region.

"This is the worst erosion I've ever seen, due to the extreme storms," he said. "These storm events are pushing me even more toward cover crops to hold soil against erosion." 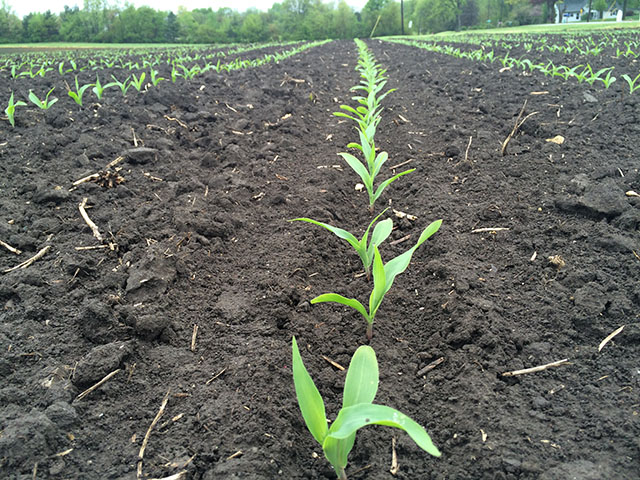