A stickler for detail and the owner of good land, Dan Gause was no stranger to high-yield corn production when he switched to precision farming in 2011. Balancing out fertility across fields put him on the road to even higher yield levels.

"Precision agriculture is what we do here and have been for the past seven years," said this corn and soybean farmer, from Scranton, South Carolina. Seven years ago, he considered 140 bushels per acre a good crop for his commercial land. Today, it's normally 200 bushels or more per acre on his established cropland, although it varies because of weather and field conditions.

In the 2016 National Corn Yield Contest, sponsored by the National Corn Growers Association (NCGA), Gause placed first in the A No-Till/Strip-Till Nonirrigated division, exceeding 346 bpa. His son, Daniel, who farms with him, took second place with a shade over 345 bpa. Their entire crop averaged about 160 bushels without irrigation.

Gause began working with his fertilizer dealer, Carolina Eastern, in 2011 to take soil samples at 6-inch depths in field segments averaging about 3 acres then used variable-rate technology to apply lime, phosphorus and potash to balance pH and fertility across entire fields. This took the place of fertilizer applied at a single rate.

"I think 'tabletop' is an overused term," Russell Duncan noted, "but you look across his fields of corn and see that they're level (every stalk is the same height or appears to be)." Duncan began advising the Gauses when he was with Carolina Eastern and still does today as an independent crop adviser. "It's the fertility program that makes them level."

Duncan said those tabletop crops perform even better than they look. Plants emerge and grow at a rapid pace, quickly providing a canopy to shade out weeds and compete for sunlight.

"We sample on soil types, averaging one sample per 3 acres," Gause said. "Some places need more lime than others; some need more phosphorus and potash."

"When we have an 8-to-10-acre field, we try to get soil samples from at least three points and triangulate," Duncan added. He uses FieldAlytics from EFC Systems to make fertilizer recommendations for Gause from the soil tests.

"Our equations are built into the program, which draws a map for phosphorus, potash and lime," Duncan said. He's reviewing another program called Adapt-N, which integrates with FieldAlytics to determine whether it will be effective at analyzing the nitrogen needs of a crop in his area. In the meantime, Gause and other customers of Duncan estimate yield potential of a field and apply 1 to 1.2 pounds of nitrogen per bushel of expected yield. Carolina Eastern precisely applies all phosphorus, potassium and lime with GPS-guided spreader trucks.

"We start off with some basic numbers, levels that we want to build phosphorus and potash to," Duncan said. "We try not to apply above and beyond what we need, just enough to grow the crop we want. I think that's been a huge success." Gause allocates resources where he gets more bang for his buck.

"We try to keep phosphorus and potash at levels based on his yield goals," Duncan continued. "We adjust nitrogen more than anything else and always use sulfur with the nitrogen. Corn uses a lot of sulfur, and our sandy coastal plain soils don't hold it well."

Gause and his adviser try to build phosphorus up to 80 pounds per acre and potash to 180 lbs/acre.

"We may put a little extra potash all across some higher-yielding fields," Duncan said. "If it's borderline, we may add a little extra."

Gause applies micronutrients with ground sprayers at V7 or V8 when tissue analysis determines the need. He occasionally applies them aerially. His most limiting micronutrient is manganese, whose deficiency is usually tied to high soil pH.

Besides precision applications, several management decisions and conditions help Gause's yields trend upward. High on his list was his decision to bring Duncan onboard. "Years ago, I didn't have a crop adviser," he said. "Russell has brought knowledge to the table that I didn't have."

Three other winners for Gause:

-- POPULATIONS. "I'm going up on populations, and some are up to 32,000 or even 34,000 plants per acre," he said. Gause rips those excellent coastal plains soils right in front of the planter, because most of them tend to develop hard pans. He seldom seeds for fewer than 28,000 plants per acre.

-- HYBRIDS. Gause plants four to five hybrids with various maturity dates, assuring perfect conditions for pollination on at least some of them. Yearly, he tries new hybrids against his standard ones.

-- WEED CONTROL. Gause applies Roundup and atrazine at planting, then comes back with the same combination just before canopy closure. "It's a simple program that works," Duncan noted.

Like any corn farmer, Gause understands the effectiveness of specific management practices varies from year to year. "There are things that work this year that may not work next year," he added. "I don't know if it's a process; you just try to do better every year."

This past year was better than the previous year, he said. "I put more nitrogen on the corn, and the rain came. If I had had irrigation, I probably wouldn't have used it." 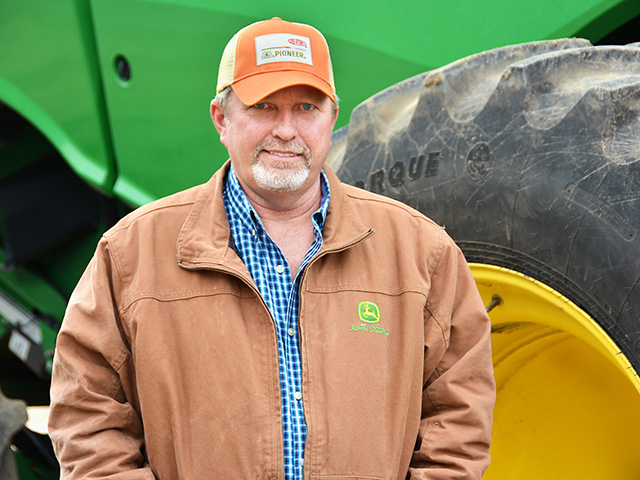