Dave Albin has a strong motivation to ensure his family's six-generation Illinois farm continues for decades to come. In doing so, he tries to make the farm as productive as possible for their operation as well as their landowners.

To that end, Albin has embarked on the relatively uncommon strategy of footing the bill to install drainage tile -- which costs hundreds of dollars per acre -- on land he rents. In exchange, he seeks a long-term lease, up to 10 years.

"The idea for this really came about 12 years ago," said Albin, who farms about 2,000 acres near Newman, in eastern Illinois. "We decided to tile all of our own land. We felt we benefited from not having the same wet spots slowing us down in the spring, among other things."

He then considered approaching landowners with the plan to pay all or part of the cost of tiling in return for a longer-term lease.

"We did this with the understanding that there may be a day when heirs or whomever may decide they don't want to own farmland," Albin said. "So, we write the leases such that either party can get out with some financial consideration."

When it comes to landlord/tenant agreements, "whatever works" for both parties is fair game, said Allan Vyhnalek, Extension educator with the University of Nebraska. In his region, it's common for tenants to foot the bill for applying lime with the caveat that they will be able to reap the benefits of that work for at least several years.

Likewise, Vyhnalek said he knows of a tenant who paid for an irrigation pivot for a small field in return for a longer-term lease. When the move paid off with much better yields -- along with the strong commodity prices of the early part of this decade -- the landowner received a bonus check that, at least in one year, was more than the rent check.

Dennis Stein, business management educator with Michigan State University Extension, said a lease that trades time in exchange for the cost of tiling has become more common for many "progressive farms as they develop what are considered win-win agreements.

"When we see a 25 to 30% discount for nontiled ground, it is very much in the landowners' best interest long-term to consider finding a tenant that would be interested in helping with this issue," Stein explained.

Current commodity prices may be a deterrent to many tenants being able to finance tile installation alone, he said. This is often when landowners and tenants devise some type of agreement to split the costs.

EVERYONE GETS AN OUT

The length of such agreements requires both sides to be able to cancel the contract early with financial considerations.

For example, if Albin pays the entire cost of tiling, the parties agree to a 10-year lease. Should the landowners change their minds on the lease five years in, Albin would be owed 50% of the total tiling cost.

"I think you want to have that flexibility down the road," Albin said, "because it lets the landlords do what they want to do. As for me, I get the benefit of productivity for whatever period of time I farm it." Albin estimates he has tiled about 40% of the land he rents under such agreements.

While the overall productivity of tiled ground often improves, the biggest benefit is greater efficiency for the operation. "We can get it planted in a more timely fashion," Albin said. "It dries down better in the spring."

A downside to installing drainage tile on someone else's land is that the property becomes more attractive and more valuable to other potential tenants, who then offer a higher cash rent. This is exactly what happened to Albin on one occasion; but, at least, he reiterated, he was compensated per the lease agreement.

"The flexibility is on both sides," he said. "A landlord may get upset about something I do, or I may not be happy with something they do. Either of us can walk away."

It may be hard for many landowners or investors to make a 10-year commitment like this, explained Josh Gerig, of Coldwell Banker Select Land Group, in Tulsa, Oklahoma.

"But, if you have a great long-term relationship with a landowner, it stands to reason you will both benefit from this move," he said. The land will likely become more productive at the same time the value of the property as an investment increases.

Such a long-term agreement does make big investors hesitant, Gerig explained. "Anything more than three years, and they get kind of skittish."

Nobody wants to be locked into a long-term relationship if the tenant/landlord relationship sours. "You're either obligated for the length of the contract with someone you don't want to be, or you have to have a financial settlement that could involve a landowner owing the tenant money," Gerig said. "In my experience, if you have a disgruntled landowner, that doesn't ever go well."

Generally, though, Gerig believes a tenant would recoup his investment in seven to 10 years, depending on productivity increases and commodity prices. "There are still some areas -- like north-central Iowa -- where tiling works like a miracle, and the yield bump you'd get would pay for the tile in less than 10 years," he said.

Albin said the time it takes him to make back the cost of tiling is right at about 10 years. Again, the real convenience for him is being able to get into a field in a timely fashion. "It makes a big difference when I can tile an area that would have previously stayed wet and would have a yield of zero to 50 bushels per acre," he said. "Now, I might get 200 bushels. Some of those areas are really productive with heavy black soils."

As for the lease itself, he modifies one of the standard leases available from the University of Illinois.

Financial considerations can be an issue on both sides, Vyhnalek explained. Sometimes, landowners have large medical bills or even nursing home expenses, and "don't have the cash on hand" for tiling even if they'd like to make the investment and recognize the benefits. That's when the tenant may be able to pay for tiling in exchange for the long-term lease.

Certainly, the cost of tiling -- $600 per acre or more -- is a stumbling block to being able to offer it to a landowner. "We've moved forward as we're able to on this," Albin said. "You have to have the financial wherewithal to do it."

The economics of tile drainage systems depends on crop yield response, initial capital investment for the materials and installation of the system, according to North Dakota State University (NDSU). There are also annual operation and maintenance costs -- such as electricity for pumped outlets -- to consider.

Research has shown that during many growing seasons, average yields may increase 10 to 15%, depending on soils, rainfall, etc. The greatest benefits of tile drainage, according to NDSU, are realized in wet years. But, drainage also promotes deep root development, so crops will often have better access to soil moisture in dry years.

There are other factors to consider:

-- Inadequate drainage can delay spring field operations from days to weeks and interrupt field traffic patterns because of nonuniform drying of the field.

-- Tile drainage affects water quality positively and negatively. Generally, only phosphorus and sediment losses via surface runoff are lower from tile-drained fields. Losses of nitrate-nitrogen and other dissolved particles in the root zone are generally greater in tile-drained fields. 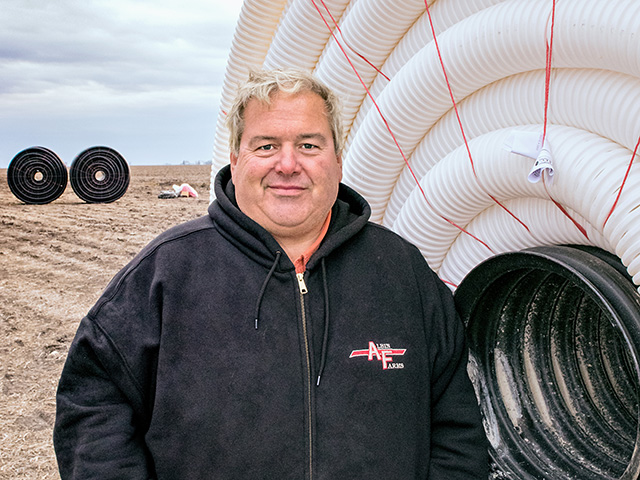