John Weber, a corn/soybean and hog producer from Dysart, Iowa, is passionate about improving water quality. The past president of the National Pork Producers Council (NPPC) and member of the NPPC environmental committee thinks every farmer should be doing something to reduce the amount of nutrients in water leaving the farm.

Weber -- who farms in partnership with his son Brian at Valley Lane Farms Inc. -- has been doing his part. He manages manure and nitrogen use, has been using cover crops for five years in seedcorn fields and, last year, installed a saturated buffer along a stream to remove nitrates from tile water before it enters a creek that runs through the farm.

The Tama County operation grows about 2,400 acres of corn and soybeans, and finishes market hogs at three sites on several farms. "About a third of the corn acres are seedcorn," Weber said. "I've grown seedcorn every year I've farmed and, on this particular farm, since 1987."

"The heavier residues from our commercial corn give us pretty good soil protection," Weber said. "Our biggest soil loss has come from seedcorn farms, where we don't have as much crop residue, and the harvest is a month earlier. The first week of September, when we normally harvest, to the following May is a long time to leave that land exposed with less cover. It's at least a month longer than commercial corn. That's where cover crops can really help."

Weber added having that extra month to get cover crops established is one reason cover crops and seedcorn are a good fit. "The protection needed while that land is idle and the extra-long window for establishment and fall growth made cover crops after seedcorn our first priority," Weber said. "We use cover crops after almost all our seedcorn now. We've found using a cover crop ahead of soybeans is easy. Soybeans can handle residue, and using a burndown to terminate the cover crop fits right in with what we do anyway to kill weeds before no-till planting soybeans," Weber said. "It's not an extra trip." He maintained the planter should be the first machine into the field to plant soybeans after the sprayer.

The Webers tried a winter wheat cover crop their first year and may use it again in the future, as they're already growing winter wheat instead of soybeans on a few isolated areas. So far, they contend winter wheat and cereal rye work best.

They've also tried kale, hairy vetch and annual rye. "We didn't get as good winter survival with annual rye, but we do like the root activity it has," Brian said.

Cover-crop seeding is a priority just as soon as seedcorn is picked. "We think we can make post-harvest seeding work for us," said Brian, who is also a dealer for Pioneer. Where needed, they use potash as a carrier and hire a commercial applicator to apply the two together with a commercial spreader with spinners. A vertical tillage pass incorporates the seed and potash.

"The cover crop will start growing if the soil is moist, or we get it on before a rain -- but we don't have a choice of when the seedcorn is picked," he explained.

Brian saw advantages to earlier seeding on parts of the field on the home farm, where kale, hairy vetch and rye were aerial-seeded into standing seedcorn. The male corn comes out in early August, he pointed out, and amounts to 20% of the field, plus the ends of the field have male corn.

"Where that corn was harvested early and light could reach the soil, the kale and vetch grew quickly," Brian said. "Overall, our goal for cover crops is to prevent soil erosion -- preventing compaction and building organic matter in the soil are secondary goals.

"But, on those end rows (where school buses, detasseling machines, trucks and other machinery compact the soil), other options, including deep tillage prior to seeding, need to be considered. We appreciate the encouragement from Pioneer," Brian added. The company has encouraged them to work with cover crops after seedcorn.

The Webers are happy with the results they're seeing from cover crops after seedcorn, but they're not quite ready to use them before seedcorn or in commercial corn. They figure their commercial corn leaves more residue for soil protection, and the need for cover crops isn't as great.

"Everyone needs to start out and continue at their own pace with something like cover crops," Brian said. "We've tried to minimize tillage ahead of corn to leave more residue. For corn, we're set up for one-pass tillage with a field cultivator in the spring -- that's pretty standard here. Eventually, we may try cover crops ahead of commercial corn."

John Weber said technology will make the difference. "Once we figure out how to get a cover crop established economically, we may plant more cover crops in commercial corn. We're watching the early-seeding, high-clearance machines and experimental work. Your timing and location make a big difference in cover-crop establishment and effectiveness. I think we need to know more about how many days in the fall they need to grow to get the benefits you want from them for the expense involved."

Still, he's keeping an open mind. "Cover crops have been around a long time, but in a corn/soybean rotation, they're still in their infancy," John said. "We're not the leaders in cover crops in this area. A couple of our neighbors started before we did, and they're continuing to have success. It seems everyone has preconceived ideas about cover crops -- some people are very much for them, some really don't think they're a good idea, and, then there are many more people in the middle who want to learn more. Interest is growing, and the trend is for more use of them."

One reason is the increasing number of severe-weather events with gully-washing rains. "This area of the state was a hard-core, full-tillage area for years, but that's changing," John noted. "Farmers are far more open-minded to conservation measures now compared to 10 or 15 years ago. We know something needs to be done for long-term soil health. Soybean yields have remained very competitive with our use of cover crops. We may not always see a yield response, but we always see less soil loss."

He added that eventually the cover crops will translate to higher yields, as they help build, rather than lose, topsoil. "You don't improve your soils in one year," Brian explained. "On the other hand, when you save soil, you also keep nutrients in your soil; and stopping those small gullies that come from heavy rains pays dividends right away."

Their on-farm project is part of the Benton/Tama County Nutrient Reduction Demonstration Project. It's one of 16 water-quality initiative projects in the state. The Webers chose to have a buffer established on their home place along Rock Creek. It consists of a 5-inch tile that drains about 50 acres, outletting into the creek. Perforated tile is placed in the buffer parallel to the creek for a few hundred feet, and then a water-control structure diverts the field tile into the perforated buffer tile. The roots of the grasses in the natural buffer take up the nitrates.

Manure from the hog-finishing operations is a big part of the Webers' nutrient plans. "Our fertility levels are very good after years of hog manure," John said. They haul manure in the fall and inject it. Anhydrous is applied on other acres in the fall, as well, but at a much lower rate than they previously did.

The Webers are also saving more acres for spring application. "We like the idea of multiple, split applications of nitrogen, and we're experimenting with early- and late-season sidedress," John added.

Iowa State University has nine test wells in the buffer to monitor nitrates in the groundwater and the amount that's still in the water when it goes into Rock Creek.

Water from Rock Creek makes its way to the Middle Cedar River, a source of drinking water for the city of Cedar Rapids. The city is partnering with more than a dozen agencies and private groups to offer more incentives to farmers in the larger watershed in the next few years. NPPC is one of the partners in the project on the Weber farm. "They want more data to help compare the effects of hog manure and commercial fertilizer, and what may be leaving or not leaving our farm. Agriculture needs more data, and I'm interested in seeing our own data, as well," John said.

The Webers say that like most farmers, they're much more conscious of how their farming methods affect the amount of nitrates in streams than they were just five or 10 years ago. "You may have an investment of $20 to $30 an acre in cover crops, and that's for long-term benefits. You don't get much return on that investment over the first year or two. But, you have to weigh that operational cost against long-term gains and doing things the right way as a responsible farmer," John said.

"We're working at it, but we can do better," he added. "Most everyone can. I really endorse the idea that everyone should be doing something for better water quality and soil protection."

In 2014, he switched it up a bit to seed cereal rye and radishes on all acres after harvest, broadcast with a spinner and incorporated with vertical tillage. Recker also tried a John Deere high-clearance machine for seeding into standing corn and has been happy with the seed pattern. "The only thing missing there is seed-to-soil contact, and that can be important," he said.

Recker is accomplishing his goal of reduced compaction on end rows. He's seen yield increases there and is convinced radishes can do what tillage can to reduce compaction, maybe better. "It's easy to implement cover crops after seedcorn," Recker said. "What it's doing for me is eliminating some tillage, reducing compaction, scavenging nitrogen, building better soil structure, preventing erosion in both the spring and fall, and helping me do my part for the nutrient-reduction strategy.

"What those cover crops do on end rows is establish a living buffer instead of bare soil. We don't know enough about biological life in the soil and what it can do to increase yields," Recker added. "I want to figure that out."

He has seen the soil conservation benefits. "I've got grassed waterways, terraces, buffer strips and no-till on my farm, and I still get erosion from strong storm events, even on more gentle slopes. So, there's still a need for cover crops."

Pleased with the results on his farm, Recker wanted to entice other seedcorn producers.

"I was in a meeting in Canada last year for Howard Buffett's high-yield conservation initiative and ran into the CEO for Monsanto," Recker recalls. "He was excited about cover crops, too, and I told him I thought it would be great to do more with seedcorn producers. He agreed and followed up to run a pilot for Monsanto's seed growers in the Oelwein, Iowa, area. Every grower was eligible to get cost-share to try cover crops, and I think about 80% of the eligible farmers in the area tried them on a total of more than 2,000 acres."

"There's still a lot of thought in this area that the land needs to be tilled and black for planting," Recker said. "My goal was to change attitudes, get people to try just one thing to improve the water quality and think about leaving the land greener longer." 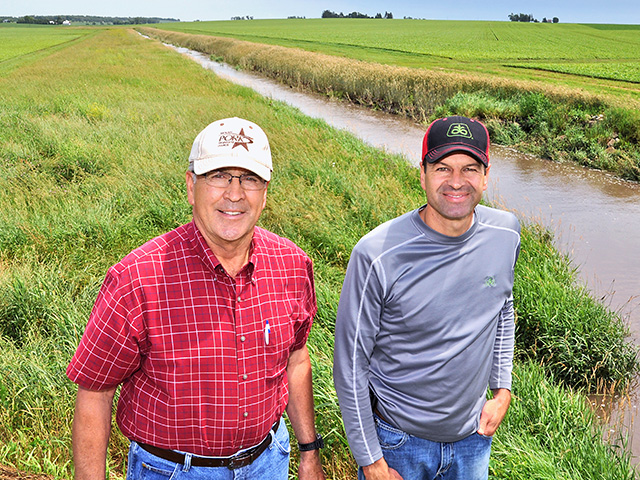