Your root zone determines the level of a field's productivity. Managing what happens to the biologic teamwork between soil, nutrients and roots offers a prime opportunity to farm even more efficiently.

Improving soil organic matter content through high residue is the most profitable way to manage this area, according to a seven-year University of Illinois (U of I) study.

U of I researchers Emerson Nafziger, Bhupinder Farmaha and Fabian Fernandez examined 35 field trials across five states. They compared deep-banded phosphorus (P) and potassium (K) to strip-till and no-till broadcasting P and K.

Their findings pinpointed the most important variable for higher yields -- soil surface residue -- which trumps both levels and placement of P and K. Fernandez, who is now with the University of Minnesota's Department of Soil, Water and Climate as a nutrient-management and water-quality specialist, calls the combination of roots, soil and nutrients the "million-dollar trio" and stressed this is where farmers should focus to increase profits.

The researchers used their results to develop the following "profit pointers" to be used as management guidelines:

-- Deep-banding P and K does not save money or fertilizer. Nutrient placement doesn't affect soybean and corn roots' efficiency. "Most roots lie within 2 inches of the soil surface, where the greatest P and K uptake occurs," Fernandez explained.

Whether P and K were broadcast or banded in no-till and strip-till systems, there was no corn yield difference because of the placement. The same held true for soybean yields. The potential advantage with deep banding can happen in soils where P and K become fixed in the soil, or where soil-test levels are very low, conditions that didn't exist in this study.

-- Environmental concerns about soil P runoff are a good reason to deep-band P. "Banding P binds it to soil particles in the soil profile, so it's unlikely to move," said Sadorus, Illinois, farmer Steve Stierwalt. He's deep-banded P for seven years but has not found a yield benefit. He's also familiar with the Illinois research as president of the Association of Illinois Soil and Water Districts.

-- Nutrient placement (broadcast versus banding) has little to do with where roots absorb P and K. Roots did not increase in banded P and K zones. The yield response to P and K was the same regardless of nutrient placement.

-- No-till has a more stressful root environment than strip-till. This costs the plant more energy to develop and maintain more roots to capture water and nutrients.

The greatest source of soil-test inaccuracy often results from how the sample was collected. Keep these pointers in mind to improve the odds of the most accurate tests:

-- Where P and K are banded, take two to three cores away for each core taken in the fertilizer band.

-- Mark sample locations using GPS so you compare the same locations each time.

"Crop residue's a big deal as we try to keep P on the farm where we want it," said Steve Stierwalt, a Champaign County, Illinois, farmer. That's why he's strip-tilled for 25 years. "Strip-till residue absorbs falling raindrops' energy and keeps soil from breaking away."

He strip-tills because it allows him to "plant earlier than my full-tillage neighbors in cold, wet springs," he said. "The black strip warms up quickly and is higher than surrounding ground, so it drains well.

"Banding does not increase yields, but we still have to keep P in place," he explained, adding strip-till residue holds the soil and limits the possibility broadcast P leaves with eroding soil.

"The challenge," Stierwalt said, "is how to convince farmers to till less. Research shows that most of them don't think they have an erosion and nutrient-loss problem."

One solution could be freshening fall ammonia strips in spring instead of cultivating them, suggested Dan Schaefer, director of nutrient stewardship for the Illinois Fertilizer and Chemical Association.

"Farmers don't have to run a spring field cultivator; they can just plant on those strips," he said. Schaefer is planning a related demonstration project. 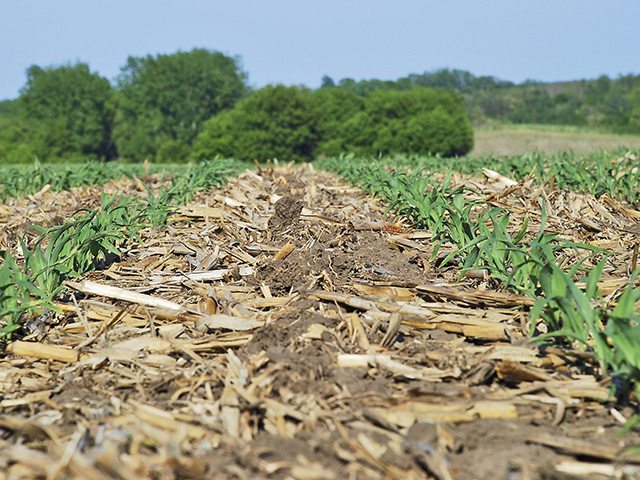