Yield is highly dependent on how crop genetics interact with the environment. That's why changing your tillage system is an influential variable not to be taken lightly, pointed out Dorian Gatchell, independent certified professional agronomist.

One example of tillage's impact really hit home for Gatchell when he viewed an aerial image (Optimized Soil Adjusted Vegetation Index) of a farmer's field. The perimeter stood out dramatically compared to the rest of the field. Gatchell struggled to interpret the two areas' difference until the farmer revealed that he'd made additional passes around the field edge.

Conservation tillage is generally defined as leaving at least 30% residue on the soil surface after planting. (Following harvest, soil-surface residue levels for corn are typically about 75 to 90% without shredding, according to Purdue University specialists.)

"So much of the amount of residue remaining hinges on local conditions, management systems, tillage depth and speed," Gatchell explained.

Books could be written about each system, but Gatchell summarized his thoughts based on his 20-plus years of experience advising western-Minnesota clients:

-- Strip-till: improves the soils' water infiltration and water-holding capacity to create a potential drought buffer during hot, dry months. Banding fertilizer places P (phosphorus) and K (potassium) below the surface and near plant roots. This eventually lowers the surface nutrient concentration and vulnerability to loss through erosion. "This is always good, especially in highly calcareous soils that tie up P because less of it is exposed to the soil surface," he said.

In addition, the strip warms up at planting just as well as conventionally tilled systems, so it's especially beneficial in northern climates.

-- No-till: System is especially beneficial to soil health but often requires more conservation-tillage experience. "It may not be the ideal first option when tapering back from conventional tillage," he said.

Gatchell emphasized you should discuss plans to reduce tillage with your local agronomist. Factors he said you need to consider include:

-- GENETICS. "Tillage affects the way seed expresses itself in the environment -- a key variable in hybrid selection," he said. "Ask your seed reps about the genetic families of your numbers. Certain traits are important as you reduce tillage, such as cold tolerance, for example. Your soils will likely be cooler with less tillage, so check the cold germination test results."

Use a familiar hybrid instead of a new number, he added. "When you make a change, it's always best to alter only a few variables at a time so that you know what's responsible for a potential improvement or goof."

-- RESIDUE MANAGEMENT. "Of course, managing residue is why we till," Gatchell said. He advises to pay attention to how well your combine shreds residue. Adjust your combine to spread residue uniformly over as much of the harvested swath as possible, especially with wider equipment. If your residue chunks are unevenly sized, the larger pieces will end up on the outside of a swath.

"Smaller residue pieces should help it break down faster -- crushing the stalk helps tremendously," he said. "But at the extreme, cutting stalks very low and chopping heads can create a mat, sealing up the soil, which you should avoid. My preference is to not chop stalks and leave them standing, attached to the soil.

"Get some drone footage of various equipment's spread pattern -- that tells you a lot," Gatchell continued.

-- WEED CONTROL. Residue can tie up some preplant-incorporated herbicides; some need black dirt, Gatchell said. Make sure you're well advised about which ones have problems in residue environments.

-- REDUCING FALL TILLAGE. Some conservation tillage considerations are more behavioral than agronomic. "In some cases, the hardest part of reducing tillage may be breaking the habit of tilling behind the combine or persuading Grandpa not to jump on the tractor after harvest," Gatchell said. "I like to soil-sample in the fall instead. The important thing is to limit the number of field passes."

-- ZONE TILL MAKES SENSE. Since fields include various soil types and degrees of erosion, Gatchell recommended adjusting tillage as you cross various eroded knobs or sandy or gravel pockets. For example, many growers lift their tillage tools as they cross a knob, he explained.

Similarly, "weigh different agronomic systems in your choices," Gatchell said. When using a chisel or disk system in high-yielding corn residue, two tillage operations will generally leave about 30% residue cover. By contrast, in a high-yielding soybean system, no-till is the only system that consistently leaves 30% or greater residue cover.

Strip-till is a versatile combination of tilled strips (which warm up quickly in spring) and no-till (between strips). This Twin Diamond demo rig demonstrates four types of closing wheels, showing strip-till's flexibility as it builds strips into an eight-way cover-crop mix.

From left to right, the closing wheels are:

-- The berming disks lack a packing system behind them. This creates a tall fall berm to combat soil erosion that settles during the winter. It's also popular for fall-applying phosphorus and potassium.

-- The iron tire is a less-sensitive alternative for wet fall conditions, adjustable for various soils and conditions. It can be placed in front of the Strip Cat for depth control. These are adjustable to accommodate various soil types or conditions. They can quickly refresh fall strips in the spring if a lot of residue moves around during winter.

-- For spring strip-till, rubber tires smooth the berm like planter tires. They tend to seal the moisture in the berm -- ideal for planting.

EDITOR'S NOTE: The first three closing-wheel options are used in the fall, the last one in the spring. 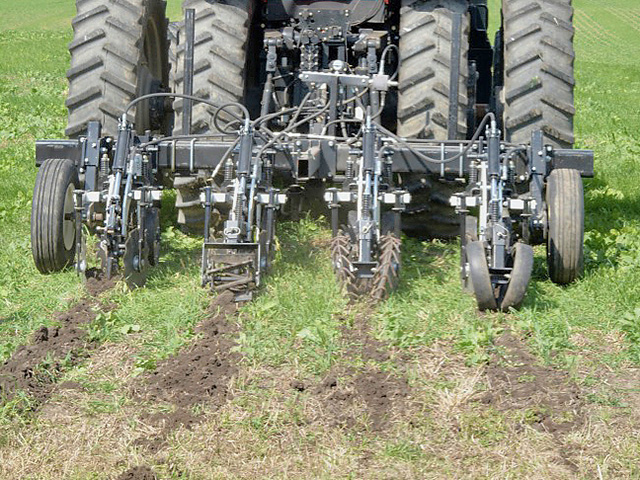