OMAHA (DTN) -- Sorghum may see another Renewable Fuel Standard boost from a newly proposed pathway for sorghum oil extracted from ethanol plants, according to a new rule proposed by the U.S. Environmental Protection Agency.

On Dec. 19, EPA Administrator Scott Pruitt signed a proposed rule to allow sorghum oil to qualify as a biofuel feedstock for advanced biofuels and biomass-based diesel. The EPA proposal came about as a result of a petition filed by the National Sorghum Producers (NSP).

"Distillers sorghum oil is still a relatively niche product, and the NSP petition anticipates a potential of 12 million to 21 million ethanol-equivalent gallons of fuel to be produced from the oil per year," EPA said in its proposal.

"We propose to define distillers sorghum oil to mean oil recovered at a point downstream of where a dry mill grain sorghum ethanol plant grinds the grain sorghum, provided that the grain sorghum is converted to ethanol, the oil is rendered unfit for food uses without further refining, and the distillers grains resulting from the dry mill and oil extraction processes are marketable as animal feed."

The agency would allow for a number of oil-recovery methods at ethanol plants, including recovery of sorghum oil before fermentation from the slurry or from liquefaction tanks, and sorghum oil recovery after fermentation from the thin stillage and/or dried distillers grains with solubles, or DDGS. Also qualifying would be oil recovery by a third-party from DDGS at ethanol plants.

EPA said it is anticipating sorghum oil producers will attempt to sell reduced-oil distillers to poultry, swine and dairy cow producers, "as these markets allow them to obtain a higher value for their product."

"Sales of reduced-oil DDGS to the beef cattle market are less likely," the agency said, "and in these cases we anticipate that should a higher fat product be required, the fat content of the DDGS could be augmented through the addition of distillers sorghum oil, thereby reducing the volumes of biofuel produced from distillers sorghum oil but not causing additional indirect GHG emissions."

"Thus, sorghum oil extraction may reduce the total mass of DDGS produced by up to approximately 4%," the agency said.

"If full-oil and reduced-oil DDGS have equivalent feed value on a per-pound basis, we would expect a reduction in the total mass of DDGS produced to impact livestock feed markets and result in a net increase in GHG (greenhouse gas) emissions if production of other feed crops (e.g., corn, soybeans) increased to backfill the lost DDGS."

SORGHUM IN THE RFS

The use of grain sorghum in biofuels production has remained relatively flat.

Currently, 13 ethanol plants list corn and sorghum as feedstocks, and in most cases, sorghum is used as a secondary feedstock by those plants. Sorghum as an ethanol feedstock is used primarily at plants in Kansas, Missouri, Nebraska, South Dakota, California and Texas.

There are two approved RFS pathways for grain sorghum on the books.

Grain sorghum for ethanol received a D5 advanced biofuels pathway at dry mills that use only biogas from landfills, waste treatment plants, and/or waste digesters for process energy, as well as for on-site electricity production.

Historically, research has been limited when it comes to improving sorghum hybrids. According to the Sorghum Checkoff's website, about $27.2 million has been spent since 2008 on industry research, http://www.sorghumcheckoff.com/….

The biofuel potential for sorghum oil is a relatively new idea.

An Agri-Energy Solutions report conducted for the Sorghum Checkoff in 2009 didn't make a single mention of sorghum oil as a possible biofuels feedstock. 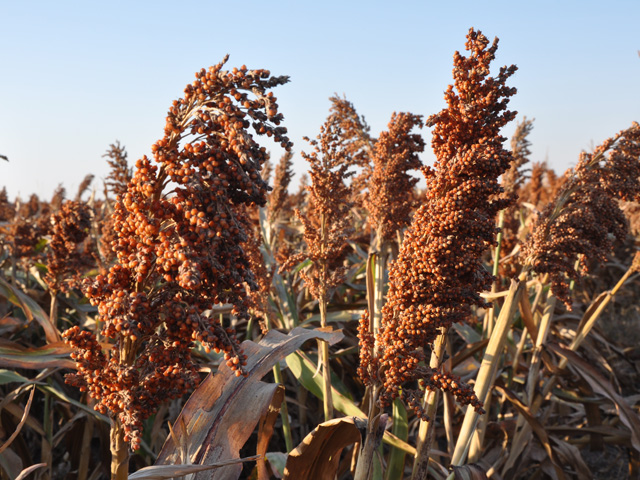