OMAHA (DTN) -- On the same day Scott Pruitt met with President Donald Trump and members of Congress from oil-producing states regarding the future of the Renewable Fuel Standard, the U.S. Environmental Protection Agency administrator also was pressed during a congressional hearing to commit to limiting corn ethanol volumes.

Pruitt has faced pressure from both oil and ethanol interests in recent months to make a variety of changes to the RFS.

Pruitt testified before the environmental subcommittee of the U.S. House Energy and Commerce Committee on Thursday. This was the first time the administrator appeared before Congress since his confirmation on Feb. 17, 2017.

After thanking him for listening to states as it relates to EPA regulations, Rep. Pete Olson, R-Texas, questioned Pruitt about what the agency will do with the RFS going forward.

"I've had long and serious concerns with the RFS," Olson said. "Until we act, you have a lot of leeway going forward."

Pruitt said the framework of the RFS is "very challenging."

Rep. Gene Green, D-Texas, asked Pruitt to commit to making changes to the corn-ethanol portion of the RFS, by limiting the amount of ethanol in the fuel supply at 9.7% by volume -- the same request made by oil industry interests.

"I can't commit to anything, congressman," Pruitt responded. "We can't pre-judge the outcome at this point."

Pruitt touted the agency's efforts so far for getting implementation of the RFS back on track. During the past eight years, the agency repeatedly missed deadlines for setting RFS volumes. So far, Pruitt's EPA has announced volumes on time.

Pruitt said the previous administration's EPA went beyond its charge and the new agency is moving to restore power to the states and follow the rule of law.

"EPA needs to be a better partner to the states, which all have unique challenges and needs when it comes to meeting environmental goals," he said. "An important aspect of becoming a better partner is recognizing that a one-size-fits-all strategy to achieve environmental outcomes has not -- and will not -- work."

On the ongoing rewrite of the waters of the United States (WOTUS) rule, Pruitt said he has so far held primarily private meetings with industry, government and other officials in more than 27 states.

"During this process, I am thankful to have had the blessing of learning about the unique challenges faced by each region, and the one-size-fits-all mentality of the previous administration," Pruitt said. "This type of top-down regulation does not foster a cooperative relationship with the states that Congress intended in the Clean Water Act."

Pruitt has faced criticism from environmental and health groups for not meeting with them to discuss their interests and concerns.

Rep. Paul Tonko, D-N.Y., said during the hearing the agency "has all the signs of an agency captured by industry."

The Pruitt-led EPA recently excluded scientists and others who receive grant money from the agency from serving on scientific advisory boards to avoid the appearance of conflicts of interest.

Pruitt has come under fire for the repeal of the Clean Power Plan. On Thursday, he said the agency does not intend to "kill" the measure but instead replace it.

Tonko questioned Pruitt about the role of science at the agency. As early as January, Pruitt said EPA will be unveiling a process that includes scientific debate among scientists within the agency. That is expected to include a so-called 'red-team, blue-team' approach to debate the merits of climate change science, in particular.

Also this past year, Pruitt said the agency is on a course to end so-called sue-and-settle tactics.

"Over the years, outside the regulatory process, well-funded special interest groups have attempted to use lawsuits to force federal agencies -- especially EPA -- to issue regulations that advance their priorities," he said in his testimony. "At some point, this exercise of 'sue-and-settle' and the practice of acquiescence through consent decrees or settlement agreements, which were often crafted behind closed doors and without the transparency of the rulemaking process, became all too common. This will not continue at EPA."

On Oct. 16, Pruitt issued a memorandum to EPA employees to end the practice.

In addition, the agency no longer will pay attorney's fees to groups with which the EPA settles.

"As I mentioned before, and have championed since my time as an attorney general, I am a firm believer that federal agencies exist to administer laws passed by Congress, in accordance with the will of this body," he said. "Compliance with the law is not just about enforcement, it is about ensuring consistency and certainty for the regulated community, so it has a complete understanding of the impact of proposed actions on human health, the environment, and the economy, and a clear path and timeline to achieve that compliance.

"We are reversing an attitude and approach under the previous administration that one can simply reimagine authority under statutes. For far too long, the EPA pursued initiatives which exceeded the authority granted to it by Congress, or circumvented the will of Congress completely." 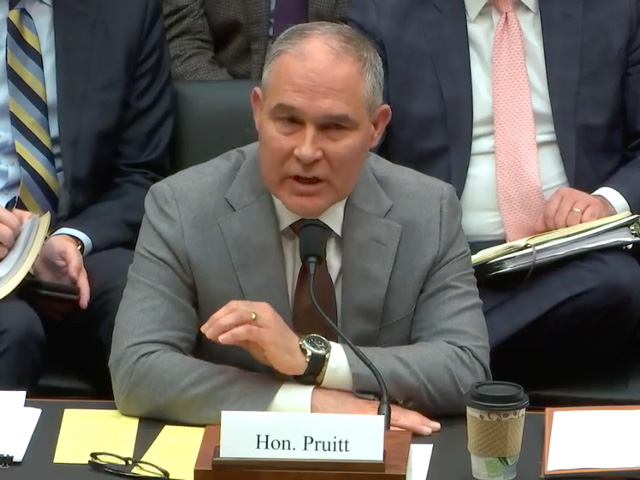