BIRMINGHAM, Ala. (DTN) -- The region generating the most concern when it comes to declining land values continues to be the Corn Belt.

According to the latest USDA land values report, five Corn Belt states (Illinois, Indiana, Iowa, Missouri and Ohio) collectively reported a small per-acre decline in cropland prices between 2016 and 2017 -- just 0.6%. That brings per-acre average cropland values in the region to $6,670. Iowa's figures were up 1.3%, with average per-acre values settling around $8,100.

That's the price Jason Smith anticipated when he scheduled an auction this year for a landowner with two tracts of cropland totaling 144 acres in Plymouth County, Iowa.

Instead, "Within 31 seconds of the beginning of that auction, the first tract was at $13,000 per acre," said the head of Dream Dirt Farm and Ranch Real Estate, based in Mondamin, Iowa. That price set a floor for the second tract, ultimately ending up with a total for the two tracts of $1.88 million, a per-acre average of $13,056.

Smith said the price was well above what the buyer expected in the absolute auction. He described the property as "pretty average" quality but noted the volume of farmland available was low, allowing for a premium. He also believes absolute auctions, where no floor is set and land is guaranteed to sell at the end of the auction, are the best way to market in a competitive environment.

"I really believe the way things are right now, a reserve only slows the auction down. In Plymouth County, we had no break in bidding, and that makes a difference. Buyers will bid if they know something is going to sell."

In the Corn Belt, Smith said, buyers definitely want quality ground, but neighborhood is increasingly important. By "neighborhood," he explained buyers want an area where there is a lot of competition to rent or buy land. Solid farmers with multiple generations in an area are the ideal for today's investors.

"What buyers want to avoid are what they call 'mudslinger' or 'gigolo' farmers. These are guys with a few years of farming experience who come into an area, run up rental rates, go bankrupt and are gone. They are an investor's nightmare. So, everyone wants to know about the neighborhood now," he said.

Asked where he thinks Corn Belt land values are headed, Smith explained they valuate land on a Corn Suitability Rating (CSR) point system. Each month, the company tracks farmland prices in Iowa and Nebraska, assigning a dollar score to the market based on the CSR and recent sales. What they continue to see is positive news.

"Last year, in October 2016, we saw an uptick," he said. "The average dollar per CSR point was around 96. Then, November, it went to 108. I had never seen it jump like that, and I thought maybe it was a blip, or a lot of high-quality farms had sold in that 30-day period. A year later, it's still at that 100-to-110 range. From what I'm seeing, the land market here is mostly creeping sideways. It's no better and no worse than it was a year ago."

Smith is optimistic that can hold through 2018 but believes the picture won't be clear until early in the new year, as producers go to lenders for operating loans. If low commodity prices cause bankers to pull back, and farmers become financially distressed to the point of liquidating land assets, supply will change the balance and push prices down. 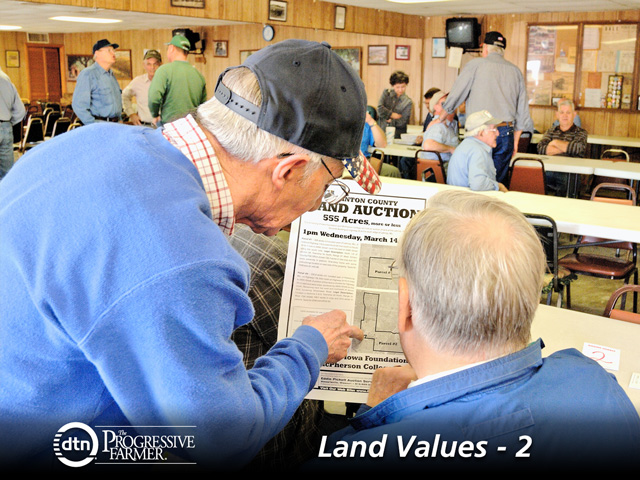