An army of scientists is hard at work to understand how plants sense, defend and adapt to harsh environments.

"Most crops are bred for high yields, but they have become very sensitive to harsh environments," he continued. "With climate change, environmental conditions are becoming more extreme. Fresh water is getting more scarce; too much soil salinity is developing in parts of the world; and hot and cold temperatures are accelerating. There's a push to develop technologies to help crops withstand these changes."

Following are a few examples of some of the promising research scientists are working on to minimize the adverse effects of stress on crops.

Genes hold the key to developing many new technologies, Zhu explained. "It's a complicated process because there are so many genes at play. We've learned a great deal about the physiology of how plants respond to stress, but we know much less about the genetic controls in the plant."

To address drought stress, Zhu's lab team has learned how plants produce a chemical known as a plant stress hormone. "When there's not enough water, plants produce significant amounts of this chemical, and plant proteins bind to this," he said. "We now know the receptor and how it triggers other proteins to work. Many genes regulate hormones that will interact with proteins to protect plant cells from dehydration. We've learned about these critical pathways of plant response, and it looks promising."

His team also has discovered some key genes -- the transporters -- that help plants manage the stress of toxic salt in the soil.

Freezing stress is another area researchers are working on to identify and select appropriate genes. "When a plant cell experiences freezing, it draws water from within the cell, which leads to dehydration," Zhu explained. "Many genes help regulate plant responses to dehydration stress from freezing. We still need to know more about how to find genes that turn on the plant's ability to protect against dehydration."

Lisa Ainsworth, researcher with the USDA Agricultural Research Service (ARS) and adjunct professor at University of Illinois, is looking at the effect of ozone on crop yield.

"Our research determined that, on average from 1980 to 2010, ozone concentrations were costing farmers 10% of their corn yield and 5% of their soybean yield. That's a significant amount of yield damage," she said.

How and why ozone affects corn and soybean yields is part of Ainsworth's biochemistry work. One big effect of accelerated ozone concentration seems to be crop aging, she said.

"Leaves have a certain life span in any crop. In corn and soybeans, the ozone can accelerate leaf drop, and the plant acquiesces [gives in to it]," Ainsworth pointed out. "Fewer leaves on the plant means less opportunity for it to use soil, water and sunlight nutrients, which typically results in less yield."

Ainsworth explained the research team built a statistical model that mated climate variables to variations in USDA historical yield data across corn- and soybean-growing regions. "As many researchers before us, we found that variation in precipitation and temperatures impacted yields. By adding ozone into our model, we also discovered that it negatively impacts yield in different places in different years."

Ainsworth's team has turned its attention to the genetic variation in ozone tolerance in corn. They're screening hundreds of different genotypes and looking at the genetics, physiological and biochemical mechanisms that make some lines more tolerant than others.

"Obviously, we look at yield at the end of the season," she explained, "but we're also looking at leaf characteristics earlier in the season to give us some additional clues about ozone tolerance. We're not there yet, but we hope to eventually provide data that will help breeders improve corn and soybean germplasm for ozone tolerance. Farmers will have a different set of genes in the seed to protect against ozone changes."

Robert Sharp is a researcher and director of the Interdisciplinary Plant Group at the University of Missouri, which is looking at how plant roots grow and respond to drought. The lab interacts with geneticists, biochemists and molecular biologists to understand plant growth regulation under dry conditions.

"We try to identify the physiological mechanisms that allow roots to continue to grow when other parts of the plant can't under drought conditions," Sharp said.

Hundreds of thousands of corn roots exist underground -- the hidden half of the corn plant -- within different places in the soil profile, he added. The complexity makes it difficult to study, and scientists know relatively little about how roots respond in dry soil.

His research is beginning to focus on the nodal roots of corn, which grow from the base of the stem. The nodal roots are important because they produce the framework of the mature root system. The later-developing nodal roots are the brace roots visible above the soil. In a drought situation, the nodal roots have to grow into and through the dry upper soil to reach moisture at depth, Sharp explained. Little is known about the mechanisms that enable this ability.

Researchers do know that roots sense when soil is drying and somehow communicate to the shoot to open or close the pores (stomata) on corn leaves, he said.

"In addition to regulating growth, roots have the ability to explore and find water in the soil. They also can sense drought early and send signals to the rest of the plant," Sharp said. "A better understanding of how root sensors work can provide an early warning system to plants, which can help adapt to drought stress."

At the University of Illinois, Stephen Long wants to know how to tweak plants for more efficient response to photosynthesis under higher temperatures.

"One area we're investigating is improving plant efficiency to convert sunlight and carbon dioxide into food," Long explained. "We simulate this on the super computers -- somewhat like looking at a car production line -- and ask: 'What are the bottlenecks and what are the ways we can intervene to make crop photosynthesis more efficient?'"

His research initially uses tobacco to test concepts because it can be modified more quickly and cheaply compared to other crops. Yet, tobacco is similar to other crops because it produces many leaf layers when planted in dense stands.

"We are selecting genes to help improve photosynthesis," Long continued. "Often, that gene is already present in a crop, but it's not producing enough of the protein that it codes for. We're trying to look at those gene properties and use them to modify a plant to produce more key proteins."

"We proved this can be achieved genetically in tobacco," he stressed. "The focus is now on achieving the same in food crops including corn, soybeans, rice and others. We think our research findings in tobacco will apply, since the mechanism that we adjusted is almost exactly the same in all crops."

Long explained the opportunity to increase efficiency is a result of the changes in the atmosphere. "The ancestors of our crops evolved in a carbon dioxide concentration, which was half of what it is today." He pointed out in the past 100 years, carbon dioxide release from burning fossil fuels plus deforestation of the Amazon rain forest have almost doubled atmospheric carbon dioxide. Carbon dioxide is consumed in photosynthesis which reduces it to carbohydrates with sunlight energy, and ultimately providing all of our food, directly or indirectly.

"Evolution has tuned it to work effectively with a much lower concentration than we have today," he continued. "We're looking at genetic modifications and other ways to help crops catch up, because these changes are too rapid for evolution in our conventional crops."

He added farmers also plant in dense stands, unlike our crop ancestors. Dense stands mean more shade on leaves, and plants have not adapted to using photosynthesis efficiently under these conditions.

The United Nations predicts that by the year 2050, 70% more food will need to be produced on the land currently used today. Increased productivity to adapt to climate change is vital for environmental sustainability and global food security. Long and many of his colleagues in plant biology research are actively paving the way.

"It's critical to discover new ways to improve crop efficiency now, because it can take 20 years before innovations can reach farmers' at scale," he said. "If we don't do it now, farmers and society won't have solutions when they need them. We will be able to grow more food more efficiently on less land, making more land available for other purposes, including biological conservation and carbon storage." 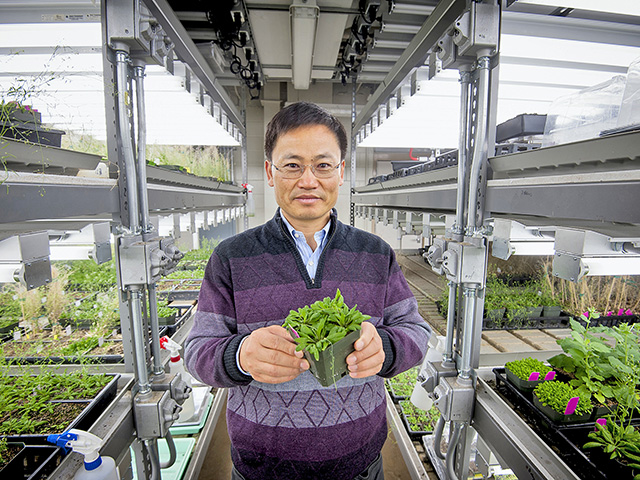