OMAHA (DTN) -- As the agriculture economy continues to struggle, members of the National Farmers Union recently decided they wanted the national organization to initiate a stronger push for the expansion of biofuels.

The NFU responded this week by hiring veteran Washington biofuels lobbyist Anne Steckel, principal and founder of Ardent Strategies, LLC, and now former vice president of federal affairs at the National Biodiesel Board, to push for the expansion of higher ethanol blends and advanced biofuels on Capitol Hill.

NFU President Roger Johnson said during a press call with agriculture journalists on Wednesday that NFU members are facing tough economic times and see expansion of biofuels markets as a way to improve the farm economy.

A recent study by the Center for Agricultural and Rural Development at Iowa State University said the Renewable Fuel Standard has boosted the value of the U.S. agriculture sector by $14.1 billion, or nearly $6,800 per American farm.

Though the RFS has been a key economic driver in rural America, the growth of the biofuels industry depends on the ability to expand the percentage of ethanol in gasoline above and beyond the current E10 market. The ethanol industry is holding out hope the U.S. Environmental Protection Agency will lift ozone restrictions on E15 to allow for its year-round sale.

"During the 1980s, there was a lot of despair," Johnson said. "Not comparing this to the '80s, but a lot of initiatives came from that farm crisis. As is true with new businesses, 90% of them failed within the first year. But there was a real success story in biofuels with ethanol leading the way.

"We saw economic development across rural America. In a lot of ways, it sort of plateaued at the 10% level. The economic crisis is very real. Farm income is about half of what it was," Johnson said.

Johnson said what the group hopes to achieve with Steckel is to promote the benefits of higher biofuel blends and advanced biofuels on Capitol Hill and with President Donald Trump's administration.

"I think we have been playing defense on Capitol Hill," Johnson said. "Our members are asking us to emphasize increased blends and to get well beyond the 10% blend wall (where total ethanol production exceeds the available gasoline market)."

Johnson said the NFU will work closely with other biofuels and agriculture groups on the initiative.

"We have struggled with a fairly limited staff here," he said. "The biofuels space has been a small part of one person's job for too long. Our members basically said you need to do more. We wanted to have conversations with other organizations in this space. This is no small effort. It takes all of us working together to sort of go back on offense."

Steckel told reporters the NFU needs to tout the successes of the RFS and advocate more strongly for the biofuels industry.

Steckel's job will be to advocate for biofuels, but also to do so while she looks for "any and all" legislative opportunities.

"Federal-level policies like the Renewable Fuel Standard have reaped tremendous gains for the farming and rural communities that grow and produce renewable, bio-based fuels," she said. "NFU will continue its avid support of the RFS and pursue innovative policy solutions that expand renewable energy demand, development and infrastructure."

A number of biofuels advocacy groups expressed support for the NFU initiative.

"Encouraging legislative and regulatory pathways that increase the availability of high-octane fuels helps American farmers as well as automakers and consumers seeking better performing biofuel choices. These kinds of forward-thinking, clean energy options are made possible by the Renewable Fuel Standard -- our nation's most successful energy policy."

Brian Jennings, executive vice president of the American Coalition for Ethanol, said in a statement his group, "welcomes the continued leadership of NFU as we all work to clear a pathway for widespread use of high-octane fuels in the future."

"The National Farmers Union has long been an ardent and effective advocate for farmers and value-added agriculture," he said. "I am quite pleased that NFU is poised to expand its advocacy to focus more directly on the U.S. ethanol industry, both through higher level blends and increased advanced biofuels production." 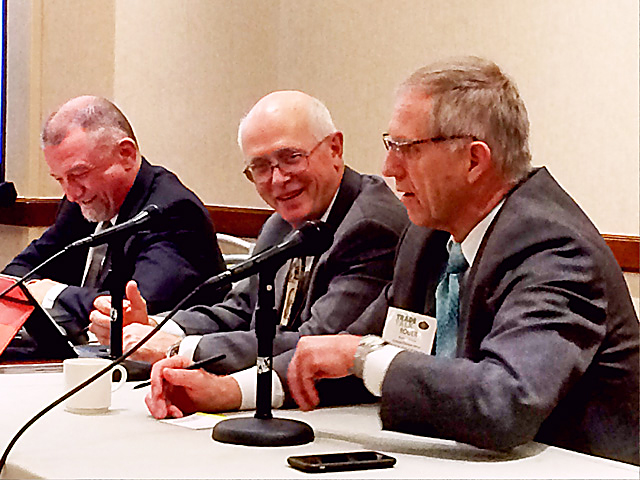