OMAHA (DTN) -- Brazil's first large-scale corn ethanol plant launched production this week and already has announced plans for additional expansion, according to a news release from the company.

The 60-million-gallon plant in Lucas do Rio Verde, Mato Grosso, initially is expected to produce 6,200 tons of corn oil and 170,000 tons of dried distillers grains.

However, the plant operated by Iowa-based Summit Agricultural Group and Brazilian agribusiness Fiagril, is expected to double production in 2018, according to a news release.

Production at the plant has been launched at a time when the Brazilian government is considering levying a tariff on ethanol imports from the United States. As a result of years of bumper corn crops, farmers in Brazil have been facing storage problems and are leaving stockpiles on the ground.

The companies broke ground on the plant in early 2016.

The $115 million FS Bioenergia plant is expected to offset the country's increasing demand for domestic ethanol.

"FS Bioenergia is the most modern and efficient ethanol production operation in the world and will revolutionize the biofuels landscape in Brazil," Bruce Rastetter, founder and chief executive officer of Summit Agricultural Group, said in a statement.

"Summit Ag Group and Fiagril are proud to have delivered this historic project to Mato Grosso, and we look forward to the development of the region as a leader in ethanol, corn and livestock production."

Rastetter is co-founder of Hawkeye Renewables. In a September 2014 interview with DTN about the Brazilian project, he said farmers in the region are looking to add value to their corn crop, and a market for dried distillers grains is growing as more cattle become part of the mix.

Brazil launched sugarcane ethanol production in the mid-1970s and today produces about 25% of the world's ethanol.

"This is a transformative moment for both agriculture and the renewable fuels industry in Brazil," said Marino Franz, founder of Fiagril.

"FS Bioenergia will not only meet Brazil's growing demand for ethanol but it sets the stage for Mato Grosso to become a global leader in the production of corn ethanol."

FS Bioenergia will employ roughly 150 full-time workers. The plant also will generate 60,000 megawatts of electricity for the local power grid.

The plant was built in Lucas do Rio Verde in Mato Grosso, an agricultural state in west-central Brazil that is the country's largest corn and soybeans producer.

At the turn of the century, just as corn-based ethanol in the U.S. started to hit its stride with investors pouring money into building new plants as fast as they could, North American producers struck up a rivalry with their counterparts in Brazil.

For much of the past decade, the U.S. ethanol industry had the wind at its back from the blenders credit and the Renewable Fuel Standard, sparking debate with the Brazilian industry about which was more sustainable -- producing ethanol using sugarcane or corn.

Rastetter told DTN biotechnology gave his company the opportunity to double-crop around Mato Grosso. Also, there is the ability to grow soybeans, corn and cotton without irrigation. It has become more profitable for farmers to double-crop corn and soybeans. 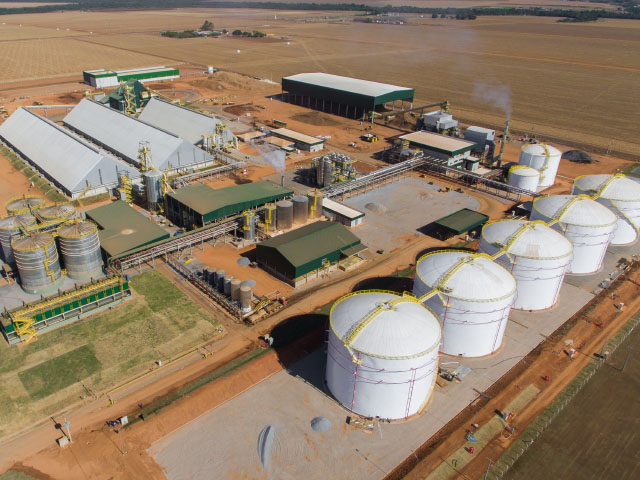