DECATUR, Illinois (DTN) -- Rick Horton is still trying to get a handle on the meaning of the freak blizzard that piled more than 20 inches of snow on his wheat crop nearly two weeks ago. The Leoti, Kansas, producer is known for pushing the yield envelope. He had yield goals set high this year after besting the dryland wheat category in a 2016 national wheat yield contest at 127.94 bushels per acre -- 373.85% above the average in Wichita County, Kansas.

Now he's just trying to determine what is left of a crop that has been bent and broken. He's estimating a 30% to 40% loss on his crop right now. However, the question remains as to whether kinked stems can still make grain and hold it up if they do, Horton admitted to DTN.

Last week Horton joined about 80 other scouts in a trek across Kansas wheat country to measure the potential of the crop. The Wheat Quality Council sponsors the tour each year as a teaching exercise and an early look at the crop. However, many fields were so lodged and still snow covered that they were impossible to sample. Agronomists said it would take at least two weeks before the full measure of the conditions would be known.

"We had a lot of questions then and we still have some unknowns that may not be answered until harvest," said Jeanne Falk Jones, a Kansas State University agronomist that covers the northeast region.

Romulo Lollato, Kansas State University wheat specialist, said in a news release this week that wheat injury due to low temperatures is more likely if it occurs repeatedly and if it is windy at night, which happened from April 29 to May 1. "We observed below-freezing temperatures three consecutive nights and wind speeds of more than 40 miles per hour for more than six consecutive hours, especially in southwest Kansas," said Lollato.

"At this time, we are seeing some fields starting to stand back up but without a clear pattern," he said in the release. "It seems to depend on wheat variety, field location, position within the field, and whether the stem broke or was only bent. The weight of the snow broke the wheat stems in many fields -- another possible loss to the wheat yield beyond damage from the low temperatures."

Tillers that broke at the joint, a particularly brittle section of the wheat stem, are probably done, Jones said. "Some of those, when you tug on them, will simply release or are starting to take on a lighter green color," she said.

"Those that are bent are interesting because in many cases, it looks like that wheat is trying to stand back up. If you look closely, you'll find some stems at right angles where the wheat is reaching for sunlight."

However, she said the wheat often looks better from the road than upon examination in the field. "When that stem is straightened, you'll find that stem is broken or has cuts on either side of the bend. So while the stem may still look green, we know there's a lot of the stem integrity that has been compromised," she said. The wheat has had plenty of moisture, which may be helping keep things green, she noted.

The concern now is whether those damaged stems will be able to handle the weight of the head throughout the grain fill period through harvest. "Injury to the stem in this fashion can result in lower yields and test weights," she added. "The wheat that now seems to be standing up, may indeed lay back down. After the rain and storms of the past few days, I'm hearing from growers that some of the wheat that was under snow that stood back up is now lodged again."

On the other hand, Jones said there have been some good surprises too. "We thought we might see some white heads come out of the boot, but that has not been the case so far," she said. "For heads that were laying in snow for a couple of days, they look pretty healthy. They are still green and when you pull apart the head and look at reproductive structures, the anthers (the part that sheds the pollen) are still green. I'm not saying that's not going to happen, but we're a ways into this event now and we're not seeing those kinds of typical freeze injuries showing up yet."

Other regions of the state received lesser amounts of cold and snow are still showing good yield potential. However, the threat of stripe rust entered the picture this week.

"The challenge for some of this wheat that was under snow is we don't yet know its fate," Jones noted. Now we have a disease that we could potentially spray a fungicide for, but how do you draw the line on some of those things?"

Meanwhile crop insurance decisions also loom. Scouts on the wheat tour observed many fields that had already been destroyed because of poor seeding stands or infestations of wheat streak mosaic virus (WSMV). "Abandonment will be high on anything iffy since wheat is so cheap," Horton said.

On Wednesday, the National Agricultural Statistics Service predicted the 2017 crop would be 25% smaller, at 1.25 billion bushels, led by a downturn in expected production out of Kansas. Nearly one-fifth of all wheat grown in the nation is grown in Kansas -- with a sizable amount grown in western Kansas the hardest hit with weather woes. Portions of Oklahoma and Colorado were also hit by some snow and freezing events and are estimated to have 1 million fewer harvested acres than a year ago.

The agency forecast Kansas winter wheat production would drop to 289.8 million bushels compared to 467.4 mb in 2016. The Kansas wheat tour doesn't officially make production or yield forecasts; however, the tour scouts estimated production at 282 mb based on established yield formulas and expected abandonment.

A video interview with Romulo Lollato is available at https://www.youtube.com/… 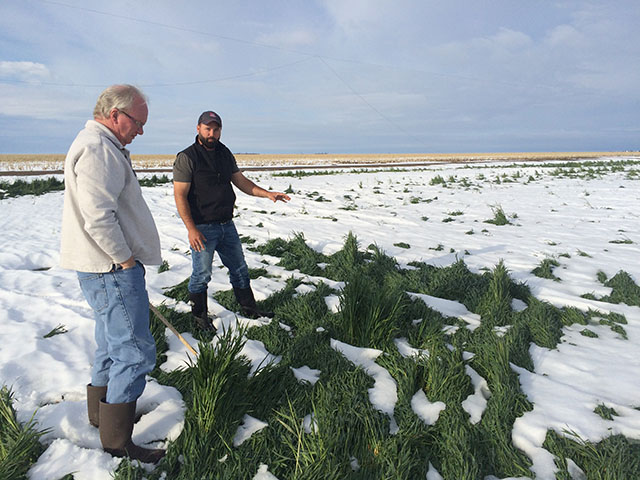