WASHINGTON (DTN) -- Chaos has reigned in the renewable fuels world in the past two days.

Dinneen said he had received a call from an official saying the White House was planning to shift the point from oil refiners to gasoline wholesalers. The shift would benefit Carl Icahn, owner of CVR Refining and a Trump adviser.

On Tuesday afternoon, Fuels America, a biofuels coalition, announced it had severed ties with the RFA as a result of what was perceived as Dinneen striking a deal with the White House.

"In keeping with our mission, we adamantly oppose any effort to derail the RFS by shifting the point of obligation and exempting certain refiners and fuel importers from their responsibility to deliver cleaner, more affordable biofuel options to consumers," Fuels America said in a statement.

Fuels America also said that Icahn, "in his conflicted role as owner of CVR Refining and special White House adviser, has sought to mislead biofuel advocates into accepting rewrites to the RFS in exchange for changes to outdated EPA regulations that limit summertime sales of ethanol. Yet, Mr. Icahn has no authority to dictate EPA policy, and a waiver to Reid Vapor Pressure limits would be meaningless if retailers lost the incentive to sell higher biofuel blends, as Icahn proposes.

"Despite our opposition, the Renewable Fuels Association has elected to lend its support to Mr. Icahn's efforts," Fuels America concluded. "Accordingly, RFA's position is no longer aligned with America's biofuel industry, and the Fuels America coalition has resolved to sever ties with the group."

Dinneen responded to Fuels America in a statement Tuesday evening: "I continue to have great respect for the Fuels America coalition and its members, and I believe deeply in its mission. RFA continues to support the goals of the coalition, which is to defend and support the RFS, a program for which the RFA worked awfully hard to pass in the first place.

"There seems to be some misinformation about our discussions involving an executive order emanating from the White House. RFA's only objective is to expand market opportunities for ethanol. We will continue to work toward that goal, while continuing to protect the integrity of the RFS."

Then, later on Tuesday, Growth Energy issued a statement thanking the White House "for putting a stop to the circulating rumors that an alleged 'deal' had been made to change the Renewable Fuel Standard point of obligation."

On Wednesday, Sen. Charles Grassley, R-Iowa, said he continues to watch what may be coming from the White House.

"Based on conversations my staff and I had, there's no reason to believe that such an executive order is pending or imminent," Grassley said in a statement.

"In case a change like that would be under consideration, I expressed my concerns to a top official so my position is known. As I've said before, keeping the point of obligation where it is now, with refiners and importers, has worked and makes sense. Moving the point of obligation from a handful of refiners to hundreds or thousands of small fuel retailers would undermine the integrity and viability of this successful program."

Dinneen said he was told the shift was a done deal and that he told the White House he would support a change in the point of obligation if the EPA would allow the use of E15 year-round.

For years, the ethanol industry has called on the U.S. Environmental Protection Agency to equalize the Reid vapor pressure, or RVP, regulations for E10 and E15 during the summer driving season. Because of those requirements, E15 has largely not been available to some wholesale suppliers and retailers who receive only E10 blends.

"I was told the executive order was coming no matter what, so I tried to get what I could for my members," Dinneen told Politico.

Dinneen said in a statement to various media outlets Tuesday that an executive order still is pending.

"There is certainly something in the works, but they're not going to confirm it until they are ready to roll with it," Dinneen said.

Growth Energy, a group that represents ethanol plant builders and operators, immediately denounced both the proposal and Dinneen's decision to cooperate with the White House.

"If true, this proposal would eviscerate America's progress under the RFS and impose indefensible costs on consumers," said Emily Skor, chief executive officer of Growth Energy.

"Neither RFA nor Carl Icahn have the authority to strike a 'deal.' Mr. Icahn does not work for the U.S. government; he owns CVR Refining, which would profit directly from this change. RFA does not represent a majority of the biofuels industry; RFA's largest member is an oil refiner, which would also profit directly from such a change. They're negotiating for the same side -- and that is not the side of the ethanol industry or the American farmer.

"This move would be a slap in the face of rural America, its representatives in Congress and the president," Skor continued. "This is precisely the sort of self-serving insider deal the American consumer rejects." 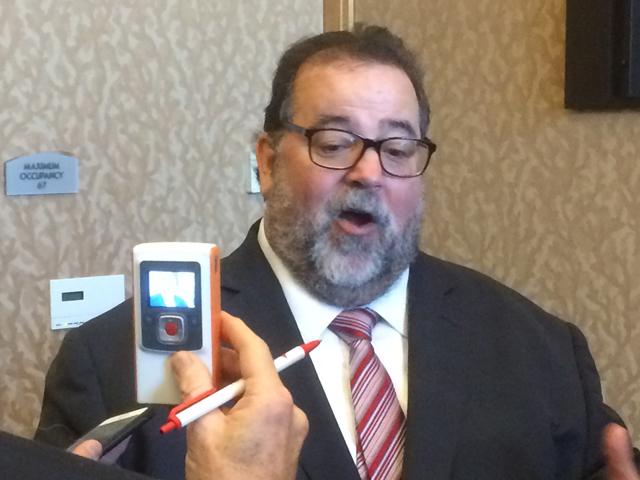