OMAHA (DTN) -- A newly formed energy company based in Warrenville, Illinois, outbid Shell Oil Company on a Hugoton, Kansas, cellulosic ethanol plant previously operated by Abengoa Bioenergy, according to court documents. The bid was for $48.5 million.

Synata outbid Shell by nearly $8 million, according to court records. Shell had made a bid of about $40.8 million. Though Synata was the highest successful bidder for the plant, which is estimated to have cost about $400 million to build, court records from the U.S. Bankruptcy Court for the District of Kansas show Shell remains the backup bid if there were any issues with the Synata bid. Closing on the sale is set for Dec. 8.

According to patentbuddy.com, Synata has 52 patents in force and 21 pending with the U.S. Patent and Trademark Office, http://bit.ly/….

Back in 2012, Coskata had announced it was making an initial public offering to raise about $100 million. Coskata, which was backed by venture capitalist Vinod Khosla, withdrew the IPO one year later, citing market conditions for the decision. In 2010, Coskata was named as one of the top 50 innovative companies by Technology Review, the journal of the Massachusetts Institute of Technology, or MIT. Coskata had partnered with General Motors back in 2008 to use the cellulosic ethanol technology.

The Coskata technology reemerged in 2015 under the Synata name.

The Hugoton plant is the last of Abengoa's ethanol assets in the U.S. to be sold as part of a bankruptcy reorganization.

The Abengoa corn ethanol plant in Portales, New Mexico, was sold to Natural Chem Group LLC at auction in the U.S. Bankruptcy Court for Eastern District of Missouri. Natural Chem announced plans to convert the plant to biodiesel production.

The 25-million-gallon Hugoton plant has been in "cold status" for some time. The plant was in the middle of start-up when Abengoa's financial problems surfaced.

The Hugoton plant is designed to use a variety of feedstocks, including wheat straw, switchgrass and even municipal solid waste. It was expected to provide an annual $17 million, 300-million-ton feedstock market for area farmers.

The plant is designed to process about 1,000 tons a day of corn stover, wheat straw, milo stubble, switchgrass and other biomass feedstocks, all within a 50-mile range of the plant. The plant also is designed to produce electricity. 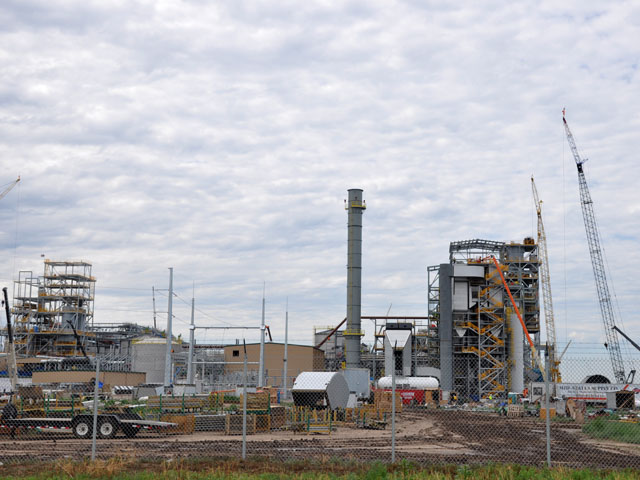