Now agronomists from MFA Incorporated have discovered northern corn rootworm (NCR) populations in northwest counties of the state that appear to have outsmarted rotation efforts by delaying their egg hatch for two years or more. This phenomenon is called extended diapause and it allows the rootworm to wait out non-corn rotations and hatch when corn returns to the field.

"The possibility of extended diapause in Missouri will greatly impact growers in Missouri," MFA warned growers in a press release. The discovery of this pest as far south as Missouri has serious implications for other growers in the Midwest, as well, said University of Minnesota entomologist Ken Ostlie.

Now that rotation-resistant northern corn rootworms appear to be spreading through the Midwest, corn farmers could find themselves with fewer and fewer control options, Ostlie said.

"We've got rotational resistance in both the western corn rootworm and the northern corn rootworm, and when that combines with Bt resistance, it could be a major game changer," he said. "You've got potential for most of the corn in the Midwest to be at risk," he said.

"Since then, large populations of NCRW beetles have been discovered in multiple fields in Atchison, Nodaway, Holt and Worth counties in Missouri as well as Page County, Iowa," the press release stated. "The alarm comes from the fact that so many beetles are being found in areas where acres are dominated by corn/soybean rotations."

To ascertain that these beetles were truly rotation-resistant and not just adult migrants from corn-on-corn fields, the MFA scientists started digging roots.

"Crop-Trak consultants have searched for and found evidence of larval root feeding in rotated corn," the release noted. "Larvae and adults were also discovered by the float method in which corn roots are submerged in water causing underground larvae, pupae, or adults to float to the surface."

BT-RESISTANCE WAITING IN THE WINGS?

Northern corn rootworms are no stranger to Missouri, but populations with extended diapause are, said Bruce Hibbard, a USDA-ARS entomologist who works on the University of Missouri campus.

If these populations build and rotation becomes less effective against them, growers will have to lean heavily on Bt proteins targeting the rootworm or soil insecticides.

Bt resistance has never been documented in northern corn rootworm populations, but that is partly a result of logistics, Ostlie told DTN. Collecting NCR eggs and hatching them in order to test their tolerance of Bt-corn roots is very difficult. The eggs are harder to collect than western corn rootworms, and because of extended diapause, scientists must simulate multiple seasons of hot and cold before they will hatch.

Along with the MFA team, Hibbard and his students have collected 4,000 northern corn rootworm beetles from Missouri fields to test for extended diapause and Bt resistance. Most of the beetles were found in fields without any Bt traits targeting the rootworm, but some were found in a field planted with Cry3Bb1, a rootworm protein that the western corn rootworm has developed resistance to.

"Industry hasn't had much success collecting eggs yet, but we have some ideas we're going try," Hibbard said. "But then we likely have to wait two years for these eggs to hatch."

WHEN ROTATION- AND BT-RESISTANCE TEAM UP

For about a decade after the introduction of Bt corn hybrids, NCR populations with extended diapause dropped and many thought they were a pest of the past.

But in the past two to three years, their populations have begun to recover in Minnesota fields, which concerns Ostlie. "The fact that numbers are increasing could indicate that we're starting to see northern corn rootworm populations develop some tolerance to Bt traits," he said.

Some Corn Belt growers have already faced this problem. In parts of Illinois, Indiana, southern Michigan, southern Wisconsin and eastern Iowa, Bt-resistance has cropped up in WCR populations already resistant to rotation, Ostlie noted. Growers there are leaning heavily on pyramided Bt corn hybrids and soil insecticides for protection.

Now Missouri growers may well join those ranks. "We're definitely going to have to pay closer attention to our trait selection when selecting corn hybrids," Worthington said. "Up until now, rootworm traits have been one of the furthest things from our growers' minds in a lot of cases because crop rotation has been so reliable."

You can find more information on the characteristics of western and northern corn rootworms here: http://bit.ly/…. 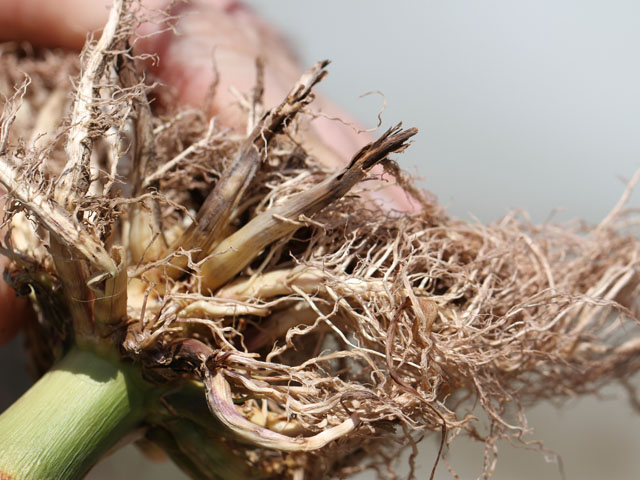