KANSAS CITY (DTN) -- Just because you pay all your bills on time does not mean you are financially stable. That was the gut-punch lesson Nebraska farmer Don Cantrell learned while farming through the 1980s.

"I had no idea how much debt was too much, and I didn't know the bank could call a loan even if your payment was current," said Cantrell of Merna, Nebraska. Now that grain agriculture appears headed for an extended rough patch, Cantrell makes sure his son and farm partner, Kyle, 36, incorporates the lessons Cantrell learned the hard way.

No one is predicting as severe a financial crisis as agriculture experienced in the 1980s. But USDA forecasts a 32% drop in net farm income for 2015, the second year of what could be a string of three or more years of losses for crop producers, ag economists forecast. Ag lenders already are gearing up for serious discussions with their borrowers this fall and winter (see related stories on DTN's Farm Business page).

Many of agriculture's newcomers could be in for a shock, worries farm consultant Moe Russell with Russell Consulting in Panora, Iowa. "There are a lot of young operators who don't have a clue what it's like to operate with big negative margin," he said. In contrast, problem loans were common during the debt crisis. By the 1986 peak, farm delinquency rates ran 49% at Farmers Home Administration, 20% at life insurance companies, 12% at the Farm Credit System and 10% at commercial banks.

One of Cantrell's 1980s nightmares was relying on a bank that bumped up against regulatory limits because it was too small to finance his full credit line. In that case, bigger banks typically help cover a large loan initiated by the smaller lender. The downside is that it can shuffle credit decisions to strangers on a loan committee in a distant city.

"My advice to young farmers: Run as hard and as fast as you can away from an over-line loan participation. You are playing with dynamite," said Cantrell. "A participating banker doesn't know you, doesn't care, doesn't tolerate risk and will cut you off in a second."

Cantrell doesn't know exactly why his lender slashed his loan request, but if he wasn't technically broke, he was awfully close. "My banker said to me, 'I will lend you $500,000 out of the $1 million you need; you decide what you're going to do,'" he recalled.

"They didn't tell me how to cut my debt, they just gave me half of what I needed. I was able to keep my land and cows, but it was tough," he said. "I should have done what my neighbor did who was a bit older than I. He sold two quarters when his debt was high, reduced his debt and then when things turned around, started buying land again."

When you are facing large negative margins, you have two alternatives, noted Russell. "You've either built up enough working capital to survive, or you have to make drastic changes in your lifestyle and operation."

Stan Reiss in Plains, Kansas, chopped his farm operation in 1986 from 2,500 acres to 1,000 acres (all family-owned). "We had a John Deere dealership at the time that was financially stressed and our farm operation wasn't making a profit. So, we sold some assets and fortunately, the bank kept us going," recalled Reiss. "Now my boys watch our financials at least monthly, and sometimes daily. They really focus on costs and have done a good job marketing." The lesson that has stuck with Reiss: Know your financial situation and don't wait too long to make adjustments.

Living in tough times doesn't mean to avoid risks. But, it's important to take managed risks.

"I really developed my marketing plan in the 1980s," said Cantrell. "I had three years of crops needing to be sold in 1988, and when corn hit $3.20, I sold it all at $3.10 per bushel. I paid off a ton of debt. Thirty days later, the corn market crashed. Lesson learned: When the charts tell me the market has topped, I sell aggressively. I'll sell one to two years out." That discipline encouraged him in 2013 to pre-price all his 2015 crop above $5 per bushel.

Kansas farmer Reiss added another line of business to diversify his income. "In 1988, a local gentleman wanted to retire and get out of his custom harvesting business. He wanted to sell me his three combines, but I told him I couldn't afford them. He even agreed to finance me, but I said 'you need to give me six months to pay you back after I sell those combines,'" said Reiss. They struck a deal and by 1995 Reiss had expanded his custom harvest business to 14 combines.

"It allowed us to grow another part of our business," said Reiss.

For young operators today, livestock may be the answer. "You can utilize your labor without having to own the livestock, and banks may be willing to finance you. Younger farmers may need to look at diversifying, advised Russell.

Not all opportunities are good. "We have bought land, but we bought it right," Reiss noted. "Sometimes that's hard to do. We let some land next to us go because my sons said, 'Dad, we can't make it work at that price.' Sometimes, you have to let that favorite tract go," admitted Reiss.

Janet and Rock Tregellas who farm in the Texas panhandle make sure they have multiple banking relationships. "Our bank failed in the 1980s, so we make sure to spread our financing around -- through different banks and our implement and irrigation companies," said Tregellas, who with her husband and son raise irrigated corn, dryland wheat and milo near Perryton, Texas.

"It's important to spread your risk. We don't want to have to deal with FDIC again and all the complications that brings," said Tregellas.

Credit standards and bank regulations are much tougher now, thanks to the 2008 housing crisis. They may flag accounts at risk of default earlier than in the last credit crisis.

"We were fortunate our bank helped pull us through in the '80s," said Reiss, who now owns stock in a local bank and sits on the board of directors. "I asked my banker if, under the new regulations, he would have been able to stay with us and he said no, not under today's rules. Credit regulations are much stricter today -- they may force your lender to drop you."

"This time around, banks won't be slow to scrutinize and act," agreed Tregellas.

Adjusting your operation or physically changing how you do things is the easy part, Reiss added. "It's also important to see the emotional side. I remember the day I thought I had lost the farm that my family had spent 80 years building up. I broke down in tears. That was tough. It turns out we could keep it together, but I will never forget that day."

There are worse things than a bad business venture, Reiss added: He heard devastating stories of the Depression from his parents and grandparents growing up in Kansas, and his own 20-year-old daughter died suddenly of a blood clot in 2006.

"It's important to keep your perspective," Reiss said. "And having faith is important. God will provide. Not always what you want, but what you need."

Agriculture, having learned some tough lessons in the 1980s, is starting this down cycle in much better shape than 30 years ago. Interest rates are low and leverage is minimal for most operations. But input costs, land rents and family living expenses including health care remain high. Adjustments will have to be made.

Dave Kohl, a Virginia Tech economist and financial adviser, reminds farmers under 40 that agriculture is a cyclical business. "Good times don't always last and bad times don't always last either," he said. "Challenging times give you a chance to refine your business and become a better financial manager." But it's important to surround yourself with positive people, he added, because you don't want to become so discouraged you don't see opportunities on the horizon.

Remember, anyone with the courage and resources could have paid $787 per acre when Iowa farmland bottomed in 1986. It's going for about $8,000 today. 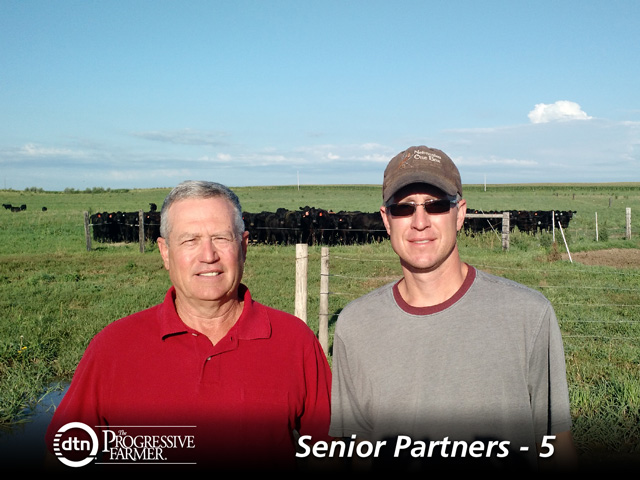