Giunta will share his harrowing 2007 story of battle in Afghanistan, emphasizing the importance of teamwork, selflessness and leadership. Giunta was the first living recipient of the Medal of Honor since the Vietnam War.

After Giunta's U.S. Army unit was ambushed and pinned down by at least a dozen Taliban fighters, Giunta was hit twice while running into enemy fire to pull his fellow soldiers to cover.

When insurgents began carrying away a fellow soldier, the now-former Army staff sergeant engaged the enemy, provided medical aid to his wounded comrade and ultimately saved a soldier from being taken by the enemy.

In his 2012 memoir, "Living With Honor," Giunta talked about his transformation from being a teenager growing up in Iowa, to being faced with death on the battlefield, to receiving the U.S. military's highest decoration.

"I'm a kid from Hiawatha, Iowa, a former 'sandwich artist' at Subway who enlisted in the Army in part because I wanted to serve my country," he wrote. "Well, let's be honest, it was also because I wanted one of those free T-shirts they were handing out at the recruiting center.

"Now, just a few short years later, I can hear the words describing what I did, and I know exactly what they represent: I remember every minute, every second, of that awful day in the Korengal Valley. And yet -- even now -- it still seems almost impossible to comprehend.

"Two of my friends and comrades were killed that day; three others were seriously wounded. But here I am, receiving the highest honor presented by the U.S. military."

During the Medal of Honor ceremony at the White House, a recitation of Giunta's heroics were read aloud.

"While under heavy enemy fire, Specialist Giunta immediately sprinted toward cover and engaged the enemy," according to the recitation.

"Without regard to the ongoing fire, Specialist Giunta engaged the enemy before prepping and throwing grenades, using the explosions for cover in order to conceal his position. Attempting to reach additional wounded fellow soldiers who were separated from the squad, Specialist Giunta and his team encountered a barrage of enemy fire that forced them to the ground."

Giunta's team continued to advance and when he reached the wounded soldier, Giunta realized another soldier still was separated from the unit.

Giunta advanced forward on his own and as he crested the top of a hill, he "observed two insurgents carrying away an American soldier."

He then engaged the enemy, killing one and wounding another. He reached the wounded U.S. soldier and began providing medical aid, as his squad caught up to secure the area.

"We are deeply honored to welcome Sal Giunta, a true American hero, to the National Ethanol Conference," RFA President and CEO Geoff Cooper said in a news release.

"His remarkable story of unwavering courage and decisive action will inspire and motivate NEC attendees. Sal's perspective on teamwork, loyalty and leadership will provide our audience with valuable insights that they can take back and apply to their own businesses and operations."

Cooper said in a news release that Giunta's message has "special meaning and resonance" for U.S. ethanol producers.

"The American ethanol industry makes a key contribution to domestic energy security and has a larger share of military veterans in its workforce than any other energy sector in the nation," the RFA said in a news release. 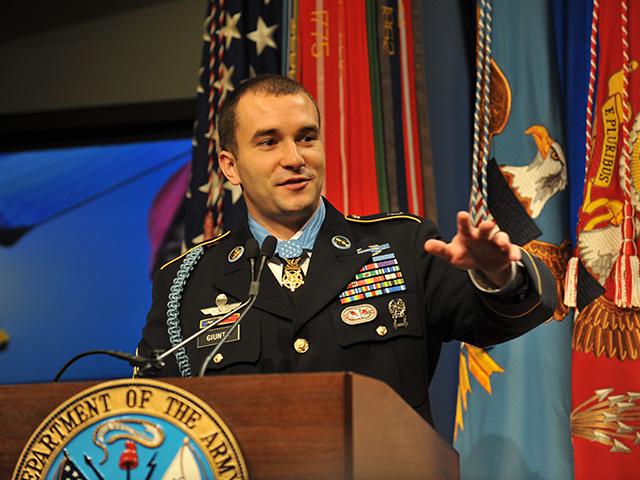