The year 2023 is starting out on an extreme weather note with the atmospheric river-related flooding in California. It calls to mind how this past year, 2022, was a year when extreme events numbered close to the top of the ledger. In all, the NOAA National Centers for Environmental Information (NCEI) recorded 18 discrete weather and climate disaster events during calendar year 2022. That number is the third highest since cataloguing these events started in 1980. The estimated dollar amount is also close to the top -- the third costliest on record. Those are two of the highlight items in the NCEI report on billion-dollar weather and climate disasters of 2022.

Other keynote features of the report include:

Hurricane Ian in September, which devastated portions of Florida, was the third-costliest hurricane on record in the U.S., trailing only Hurricane Katrina in 2005 and Hurricane Harvey in 2017.

Drought was notable. Drought coverage across the contiguous U.S. remained significant for the second year in a row with a minimum extent of 44% occurring on Sept. 6 and a maximum coverage of 63% on Oct. 25. That 63% maximum coverage was the largest contiguous U.S. footprint since the drought of 2012. Drought impacted much of the western half of the U.S. for a majority of the year with many major reservoirs at or near record-low levels. In addition, as of early January, 40% or more of the contiguous U.S. has been in drought for the last 119 weeks -- more than two full years. This was a record in the Drought Monitor's 22-year history, beating the previous record of 68 consecutive weeks from June 2012 to October 2013.

The 18 disaster events break down as follows: 1 drought event, 1 flooding event, 11 severe storm events, 3 tropical cyclone events, 1 wildfire event, and 1 winter storm event. The total impact of these events includes the deaths of 474 people along with significant economic effects on the areas impacted. The 2022 run of billion-dollar events is in line with a spike in these events during the past five years. The 1980-to-2022 annual average event total is 7.9 events (CPI-adjusted); the annual average for the most recent five years (2018 to 2022) is 17.8 events (CPI-adjusted).

Wildfires burned around 7.5 million acres across the U.S. in 2022, which was near average. Tropical storm and hurricane numbers were near the historical average at 14 named storms. The tornado count for 2022 was near average at 1,331 tornadoes reported.

The full extreme weather report is available at this link: https://www.ncei.noaa.gov/… 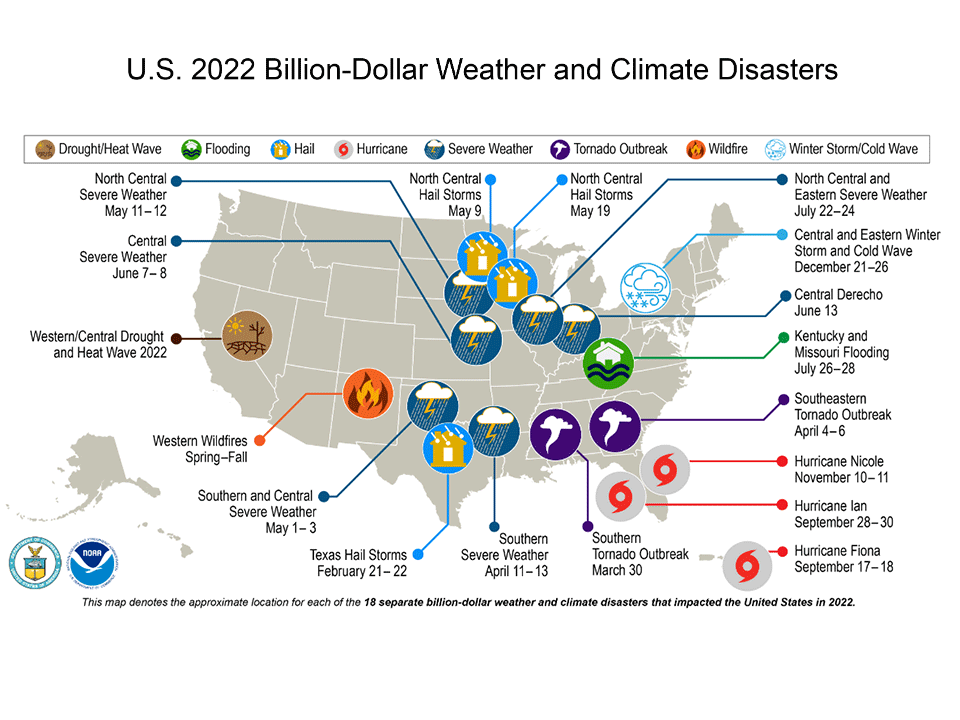