Damage to Southern Plains crops and forage in 2022 had no easing from season to season. Winter wheat production in the region was down 14% from a year ago because of drought. And the 2022-23 winter wheat crop is off to a tough start. A NOAA quarterly weather impact report for fall season (September-October-November) notes that winter wheat has the largest poor to very poor rating in the past 20 years.

The report also noted that sorghum yields were down 53% and soybeans were down 27% in Kansas this year due to the ongoing drought. USDA's Ag in Drought report for mid-December placed 71% of winter wheat in drought. Those drought-related numbers continue when soil moisture is analyzed; much of the area has either record or near record low soil moisture ratings.

A look at snow cover from late fall and early winter storms indicates no relief or even the start of needed moisture supplies either. Snow cover is moderate to heavy in much of the northwestern and northern U.S. and even in the chronic drought locales of the Far West. However, almost all winter wheat areas of the Southern Plains and the southern Midwest had no snow cover heading into the last half of December, with little to no snow suggested in the forecast. A storm system for Christmas weekend ahead of bitter cold Arctic air tracked across the Northern Plains to the Great Lakes, leaving the Southern Plains dry.

With the Southern Plains in what could be called a "snow shadow", two damaging elements come into play for winter wheat and forage crops -- harsh cold and strong winds. Winds sweep away any snow that does fall in the region, along with soil around the crown of the wheat plant. That makes it possible for the cold air to get into the structure of the wheat seedling and cause winterkill. Some damage is possible even with wheat in the dormant phase. There is also very little protection from the dry soils, because there is no moisture to evaporate and offer some moderation in cold conditions from the evaporation process.

A weak polar vortex in the far northern latitudes is the primary cause of the harsh cold snap that affected winter wheat areas, but it's not the only factor at play this season. A third winter of La Nina conditions in effect in the Pacific Ocean is also an ongoing feature. Mid-December analysis of the equatorial Pacific sea surface temperatures showed values of minus 1 to minus 1.5 degrees Celsius (about 2-3 degrees Fahrenheit) from South America all the way west to past the International Date Line. Those readings are in La Nina category. In addition, the Southern Oscillation Index (SOI) barometric comparison between the island of Tahiti and Darwin, Australia stood at plus 11 on the 30-day average going into late December -- a value which indicates La Nina still in effect. And, with La Nina still around, the Southern Plains moisture prospects remain low through the winter season.

Forecasts continue to suggest easing of La Nina through the rest of the winter and into the spring of 2023. How much of the Southern Plains winter crops and forage are still viable to benefit from such a change will be a consistent question the balance of the season. 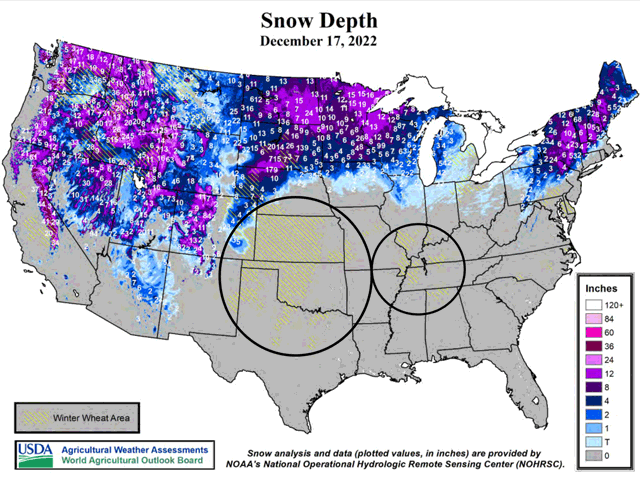