A briefing on the winter snow outlook for the western United States posted by the National Oceanic and Atmospheric Administration (NOAA) and the National Integrated Drought Information Service (NIDIS) on Nov. 30 strongly suggests that drought in that region will have mixed prospects at getting enough precipitation during the meteorological winter season (December-February) to offer any tangible drought easing.

This winter season 2022-23 is called "crucial" for moisture needs in the western U.S. "Western water supplies are truly shrinking as some states are facing their second or third drought year in a row and a large part of the region is stuck in a 20+ year megadrought," the briefing summary noted. "Hanging over all of this is climate change-influenced aridification in the Southwest that is increasing evaporative demand, causing water supplies to dwindle from rising temperatures even when there is adequate precipitation. The two largest reservoirs in the U.S., Lake Mead and Lake Powell, are currently at the lowest levels since they were filled: both are below 30% of capacity. The two largest reservoirs in California, Lake Shasta and Lake Oroville, are at 31% and 27% of capacity, respectively."

The presence of La Nina in the Pacific Ocean amplifies concern about winter moisture prospects. La Nina is the term used to describe a sustained period of lower-than-average water temperatures in the Pacific along the equator between the coast of South America and the International Date Line. A third consecutive winter of cool Pacific waters is expected. The western U.S. briefing emphasizes that "The seasonal drought outlook shows that a below-average peak wet season is anticipated for central to southern California and the Southwest, favoring drought persistence, while drought reductions are favored for the Northwest and northern Intermountain West."

This is in line with observed precipitation trends when La Nina is in effect. Storm tracks with La Nina's presence tend to focus in the northwestern U.S., Northern Plains, and then southeast to the Ohio Valley before curving back toward the New England region. At the same time, the western and southwestern U.S. along with the Southern Plains, Gulf Coast and southeastern U.S., are largely bypassed by the La Nina storm track.

The mixed drought outlook brings the potential for useful soil moisture recharge in the interior Pacific Northwest along with portions of northern California. How significant the recharge will be for the big California reservoirs is questionable, however. In addition, limited moisture in the southwestern U.S. during this winter is not promising for Lake Mead and Lake Powell on the Colorado River.

Most of the Southern Plains is expected to continue with drought through the winter. Drought is also expected to develop in the southeastern U.S. Meanwhile, drought easing is indicated in the lower Mississippi Valley and the Ohio Valley. 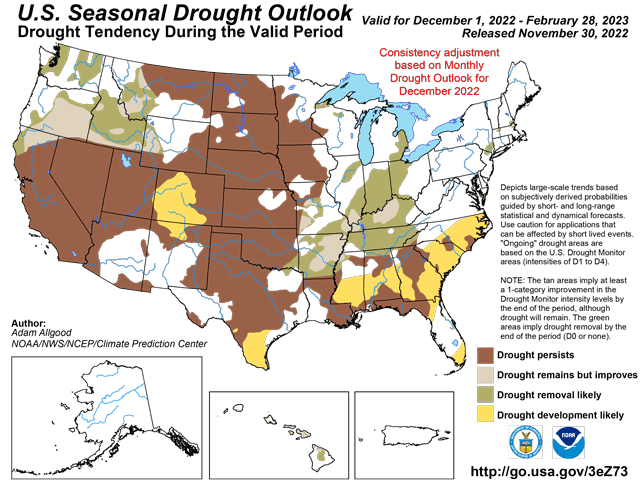