WASHINGTON (DTN) -- Advances in research over the past five decades make it possible for the U.S. to "do more" to make "a stronger and healthier nation," President Joe Biden said Wednesday at the White House Conference on Hunger, Nutrition and Health.

Biden noted the 1969 White House conference on hunger led to "transformational change" such as the expansion of the federal nutrition program that has helped people "lead better lives," but now there is so much more that can be brought to bear through science and research, he said.

The president reiterated a goal he set to end hunger.

"I really do know we can do this. End hunger in this country by the year 2030 and lower the toll -- lower the toll that diet-related diseases take on far too many Americans," Biden said.

Biden did not spend much time on the specifics of the lengthy national strategy the White House has released, but he did say Congress should pass an expansion of the child tax credit and make it permanent. Biden acknowledged he has failed at that goal but said, "We'll get it done this time."

The fact that fewer people live below the poverty line today, Biden said, shows the United States can make progress on these issues.

"If you look at your child and you can't feed your child, what the hell else matters?" Biden said. "In America, no child should go to bed hungry. No parent should die of disease that can be prevented."

Key elements of the White House plan on nutrition also rely on Congress. The upcoming farm bill debate, for instance, plays a pivotal part. So, it's unclear how quickly at least some of the goals of the conference could become reality when many Republicans oppose expanding federal nutrition and health programs.

Biden ended his speech by urging unity on the anti-hunger and nutrition issues.

He also called on the attendees to "restore some of the decency" in America. He recalled his friendship with the late Sen. John McCain, R-Ariz., saying they could fight on the Senate floor and then have lunch together.

He also noted that after the 1969 conference organized by the Nixon White House, Sens. Bob Dole, R-Kan., and George McGovern, D-S.D., worked together to achieve many of the goals.

"Looking at you, I know we can do this," Biden said.

Members of Congress who provided the White House with $2.5 million to hold the conference repeated themes they have stated many times on Capitol Hill.

During a panel discussion moderated by White House Domestic Policy Council Director Susan Rice, House Rules Committee Chairman Jim McGovern, D-Mass., who has pushed the executive branch to hold such a gathering for years, said it was "a big deal" that the president of the United States had just announced ending hunger is a national priority.

Sen. Mike Braun, R-Ind., said the three words that make up the conference -- hunger, nutrition and health -- shouldn't be partisan. But he spent most of his time talking about his success in convincing the employees in his company to eat and live healthy and the fact that these practices meant the company didn't have increases in insurance premiums for 15 years.

Braun, who is rumored to be considering running for Indiana governor, said he has traveled his state and believes Indiana can achieve many hunger, health and nutrition goals because "we have Purdue (University) and we are doers."

Rice noted Sen. Cory Booker, D-N.J., has been interested in nutrition since he was a college football player at Stanford (where she also went to college) and mayor of Newark.

Noting that Black and Brown people especially have diet-related diseases and the government spends a lot of money on health care, Booker said, "We have a food system that is doing the wrong things."

Booker also said, "We need to put the F back in the FDA (Food and Drug Administration). The FDA has done remarkable things. We need to focus back again on food."

McGovern closed out the panel, saying he hopes it can result in an all-of-government approach to the hunger issue.

"We are so siloed," McGovern said. "We all need to be in a room together. We need to uplift best practices." He added this also means states, localities and the private sector.

"This is our moment. We all have to do our part," McGovern said.

The White House also published a list of private-sector groups that have made $8 billion in commitments to fulfill the goals of the conference.

Vilsack promised the Biden administration would monitor the $8 billion in commitments that are tied to goals to end hunger and diet-related diseases.

Asked at a news conference about how the administration will know whether the companies and other private-sector groups will fulfill their commitments, Vilsack said USDA will monitor some commitments and he expects other Cabinet departments to do the same thing.

"We will set up a process," Vilsack said. After the launch, the administration "has a responsibility" to monitor the commitments and see if they need assistance but also "to make sure they are doing what they promised."

Asked about the emphasis on fruits and vegetables at the conference, Vilsack said the corn and soybean industries, which produce feed for animals, do not need to worry about their futures.

"We are also looking at sustainable aviation fuel," Vilsack said. "There is going to be plenty of opportunity."

Their criticisms factor heavily into policy debate, especially if the House flips in the November election.

"Republicans undoubtedly share an interest in improving the health of all Americans. Yet, the disorderly nature in which this conference came to fruition has sparked legitimate concerns," Thompson stated. "From unanswered inquiries to the exclusion of many Republican and Democrat policymakers and relevant stakeholders, it's unfortunate today's conference has seemingly deteriorated into a handpicked political gathering whose sole purpose is to perpetuate partisan ideologies. I remain committed to reviewing any emerging policy proposals and will make certain our producers are part of the conversation."

Thompson noted he had sent a letter to the White House requesting answers to questions about the conference and did not receive a reply. He noted he and other members sent a follow-up letter.

"The Biden administration would rather rely on liberal policy standards than engage a range of stakeholders who are working to address hunger and nutrition in America," Foxx said. "Poor planning and obfuscation, trademarks of the Biden White House, set up this conference to be forgotten before it even started. In the future, I would encourage this administration to put aside the partisan politics and collaborate with all stakeholders to create constructive policies."

A Republican Study Committee budget proposal released over the summer, backed by 170 GOP House members, calls for block granting the SNAP program and tightening eligibility standards. Some of the proposals were part of the 2018 farm bill that initially failed on the House floor.

Asked by DTN about comments by Thompson and Foxx, Vilsack said, "There are 433 other members of the House." 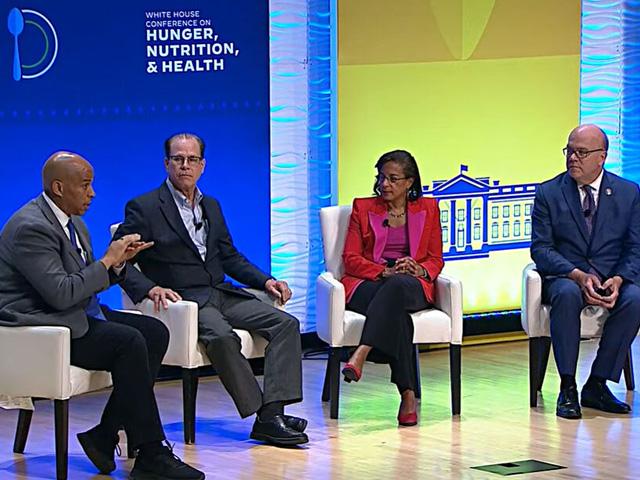