OMAHA (DTN) -- Cattle and calves on feed for the slaughter market in the United States for feedlots with capacity of 1,000 or more head totaled 11.3 million head on Sept. 1, 2022, USDA NASS reported on Friday. The inventory was slightly above Sept. 1, 2021. This is the second-highest Sept. 1 inventory since the series began in 1996.

Marketings of fed cattle during August totaled 2.00 million head, 6% above 2021.

"Placements during the month of August were a gamble to call, as one roll of the dice could have claimed that placements were going to be higher, as auction receipts grew throughout the month. But, on the other hand, the alternative roll could have proclaimed that given the pointedly higher placements earlier this year, drought marketings had already pushed the vast majority of cattle into feedlots. Nevertheless, Friday's Cattle on Feed report shared that placements during the month of August 2022 totaled 2,112,000 head, which was completely steady with last year's placements. This weighs on the report's bullish nature, as analysts' weighted average predicted that placements would be 98.1% of a year ago. The states that saw placement increases from a year ago were Arizona (up 5%), Iowa (up 16%), Kansas (up 1%), Minnesota (up 29%), Nebraska (up 3%) and Texas (up 9%). One thing to keep in mind when mulling over these placement figures is that in a normal year, heifer calves aren't placed as aggressively in feedlots as they are right now. But given that drought conditions are still plaguing a considerable portion of the U.S., heifer calve continue to find their way into feedlots across the nation.

"But, thankfully, fed cattle marketings did not disappoint in the month of August! Compared to a year ago, fed cattle marketings were up 6%, which equates to 2,004,000 being marketed. Given the aggressive pace in which cattle are being placed, this news is substantial, as keeping showlists current remains extremely important." 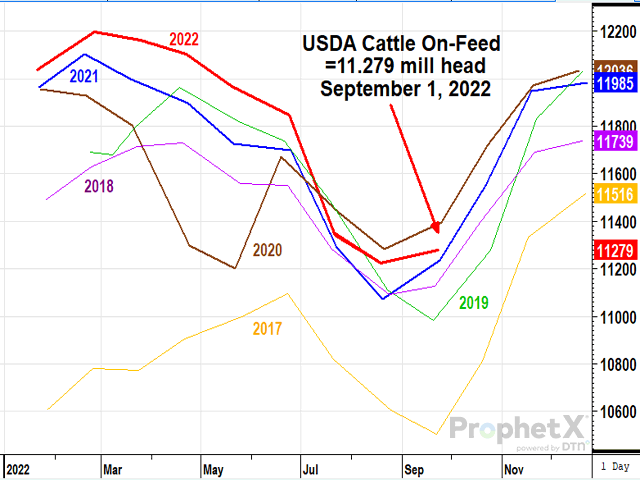