The past week featured the beginning of the 2022 astronomical fall season, with the autumnal equinox occurring Thursday, Sept. 22. But for weather recordkeeping, the fall season began on Sept. 1. And for much of the lower 48 states affected by drought, this season is offering little to nothing in the way of significant soil moisture improvement.

Satellite-based analysis and forecasting using the Gravity Recovery and Climate Experiment Follow-on (GRACE-FO) mission, a satellite-based project which tracks the movement of water across planet Earth, indicates hardly any meaningful recharge of soil moisture levels in the three months of September, October and November. A review of the groundwater drought indicator as forecast using the GRACE mission offers a stark example of this scenario.

The GRACE groundwater drought indicator shows some wetter soil conditions for the northeastern Plains, eastern Midwest and Delta during this fall season, along with the Pacific Northwest coast and a portion of the southwestern U.S. where recent, very-active monsoon rains have occurred. Elsewhere, a tough fall for soil moisture supply is indicated. The western Midwest, northwestern, central and southwestern Plains, the remainder of the western U.S., and the entire Atlantic seaboard have practically nothing offered in the way of groundwater improvement this fall.

The ongoing presence of La Nina in the Pacific Ocean is certainly a big contributor to this grim prospect. La Nina, where ocean temperatures along the equator between South America and the International Date Line have a consistent value of at least 0.5 degree Celsius (0.9 degrees Fahrenheit) below normal, is going into its third consecutive year. Jet stream pattern alterations due to La Nina have diverted moisture away from the interior U.S. and are set to maintain that drying influence through the next several months. In addition, a hot, late summer brought further drying and moisture loss. For example, Nebraska and Kansas had August precipitation totals which were second-driest and seventh-driest on record. Montana and Wyoming had August temperatures which were from eight to ten degrees Fahrenheit above normal, according to a NOAA summer season weather review. Also, USDA noted in its Sept. 20 Weekly Weather and Crop Bulletin that total drought coverage in the U.S. finished the summer with more than 40% of the contiguous U.S. in drought for 101 consecutive weeks -- a 21st Century record. That's almost two full years, going back to late summer 2020.

Looking to the end of the month, short- to medium-range forecasts do not offer much in the way of precipitation. A turn to more tropical system activity in the Atlantic Basin implies that Gulf of Mexico moisture will be commandeered by tropical storm or hurricane development. In addition, continental North America weather systems are focused in the Canadian Prairies, which typically means only marginal precipitation for the interior U.S. These details only serve to enhance the meager moisture outlook for already-dry crop areas as fall 2022 officially -- in terms of the sun angle -- gets underway. 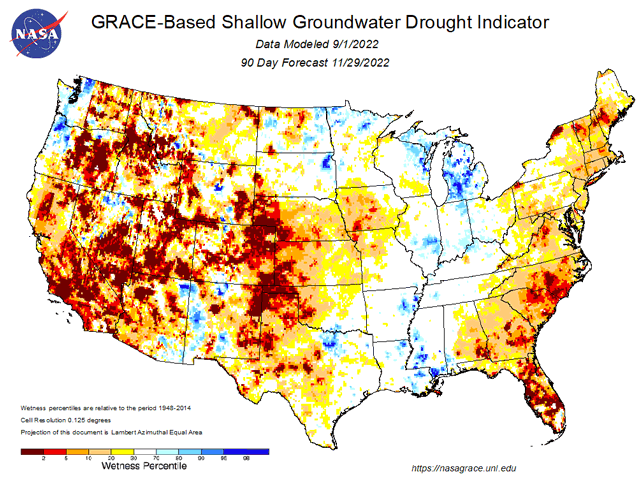