La Nina scares Brazilian farmers because they know all too well that lower sea-surface temperatures in the tropical Pacific Ocean typically leads to dry conditions in southern states, and a delay to the wet season in northern states.

Two years ago, the dryness in the south wasn't too bad, but the wet season was delayed by about two weeks in the central. Last year, the wet season started fine for central states, but southern areas were incredibly dry.

This year, it feels like La Nina has no influence whatsoever -- at least not yet. During the late winter and early spring, fronts have been regularly pushing into southern Brazil and stalling, with scattered showers developing for a few days followed by another round a few days later. Soil moisture in these southern states, from Mato Grosso do Sul to Parana and points south, are near or above normal for this time of year.

But this week, a front is pushing deeper into the country and has been bringing scattered showers to central states as well. So far, the rains in central Brazil have not been heavy. They've been somewhat isolated to widely scattered and not overly intense. But that front is now moving farther north and is going to stall out from Mato Grosso to Minas Gerais from Sept. 22-25. Periods of showers will help to soften soils for more widespread planting of first-crop soybeans near or ahead of schedule.

That will not be the end of the rain in the near future. Another front will move out of Argentina and into southern Brazil Sept. 28. Once again, the front is forecast to move into central states and produce widespread precipitation across the entire growing region.

In between the two fronts, showers may still pop up and produce good rainfall. Forecasts from the European Centre for Medium-Range Weather Forecasting suggest that 30-60 millimeters (1.18 to 2.36 inches) of rain will fall in the next 10 days, with many areas seeing more than that based on thunderstorm movements and persistence over areas. Getting that much rain will continue to provide ample soil moisture for southern states that have already gotten a jump to their planting, while starting off the wet season for central states pretty close to the average start date of Sept. 26.

There is a caveat though -- and with weather, there usually is one. After the second front moves through next week, there are not a lot of chances for getting showers back into southern Brazil going into the first couple of weeks of October. La Nina may be back up to its usual tactics of dryness over southern Brazil.

As long as soybeans have the chance to be planted and germinate, then the crop could handle a few weeks of drier weather in its early development stages. Full-season corn may see some issues if the roots cannot chase the soil moisture deeper into the column. And producers that do not plant early could be looking at delays until rains return.

For central Brazil, the end of the front will coincide for the start of the typical wet season with near-daily showers then as October starts up, a good start to their first-crop soybeans and keeping the safrinha corn season on track. 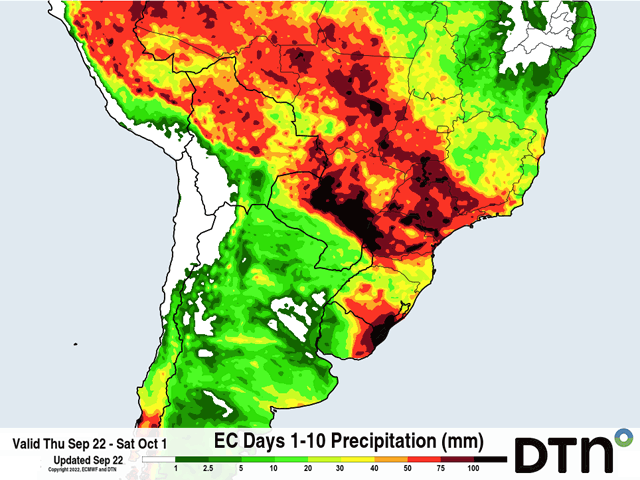