Although much of the focus was likely on the corn market prior to the release of USDA's September World Agricultural Supply and Demand Estimate report, it surprised many with bullish yield, production and ending stocks numbers for soybeans. Wheat was fairly neutral, and traded that way, while corn overcame some neutral to slightly bearish numbers to join soybeans and move higher.

With most traders focusing on the corn yield, production and acreage numbers ahead of the September USDA reports, the usual market-moving report actually surprised unsuspecting traders with some dramatic changes to the soybean balance sheet. Included in the September WASDE report was a change in planted and harvested acres for both corn and soybeans following the USDA's re-survey of late planted areas.

The re-survey resulted this year in a drop of corn planted and harvested acres by 1.2 million acres and 1 million acres, respectively. Dow Jones' pre-report trader survey expected to see a drop of 3 bushels per acre (bpa) from August, and they were awfully close, with an actual drop of 2.9 bpa to 172.5 bpa by USDA. That resulted in production falling to 13.94 billion bushels (bb) from 14.359 bb in August, which is down 415 million bushels (mb) from a year ago. With the smaller crop and slow export pace, USDA then lowered total corn usage by 250 mb, dropping feed and residual and exports by 100 mb each, and dropping corn used for ethanol by another 50 mb. In the end, with traders expecting an ending stocks number of 1.18 bb, that actually came out at 1.219 bb by USDA, down 169 mb from August's number. That figures to be a stocks-to-use ratio of just 8.5%. USDA raised the season average farm price by a dime to $6.75 per bushel.

December corn futures were trading down 3 cents just prior to the report, before rallying to finish sharply higher -- up 11 cents, pulled up by the massive soybean and meal market gains.

Emotions expressed following the USDA's release of the September WASDE report were that of surprise, at least with respect to the soy complex. While pre-report estimates expected only a modest decline in both soy yield and production, there were many in the trade who would not have been surprised by a record or near-record yield and production number. However, that was not the case, as USDA surprised with a 1.4 bpa slide in yield to 50.5 bpa, and production that was 151 mb below the August report number, and a full 100 mb less than traders had expected. To add fuel to the bullish fire was the 600,000 cut in harvested soy acres to 86.6 million acres. On the demand side, USDA, to account for the smaller crop, dropped crush by 20 mb to 2.235 bb, and exports were lowered by 70 mb to 2.085 bb; the result was a decline of 45 mb in U.S. ending stocks to just 200 mb, and the lowest in seven years. Some of the larger declines in production from August to September were in Iowa and Kansas -- down close to 30 mb each, with Nebraska falling a hefty 55 mb.

On the world front, the roughly 4 mmt (1.47 mb) decline in U.S. production set the stage for a lower world ending stocks number. That number ended up being 98.9 mmt (3.63 bb), a 2.5 mmt drop from the August report. Within the world numbers was a cut of China's soy imports by 1 mmt to 97 mmt; no doubt the result of poor hog margins and the drop in demand attributed to Covid lockdowns. EU soy imports were dropped by 400,000 mt to 14.8 mmt. The surprising numbers on soybeans sent soybeans skyward, with a 76-cent gain at day's end. Prior to the report, November beans were trading up 6 to 7 cents.

On the domestic side, wheat had no changes, with all-wheat production remaining at 1.783 bb and ending stocks remaining unchanged at 610 mb. Traders had looked for a modest increase in ending stocks prior to the report.

There were a few notable changes in world wheat numbers. Both Russian and Ukraine production were revised higher from August, by 3 mmt and 1 mmt, respectively. Russian production was pegged at a record-large 91 mmt (3.34 bb), with Russian exports jacked up by 1 mmt to 45 mmt (1.65 bb), while Ukraine production was raised to 20.5 mmt (753 mb) and exports moved 500,000 mt higher to 10.7 mmt (393 mb). On another note, despite some analysts calling for a decline in Indian wheat production and exports, that was left totally unchanged. World wheat ending stocks rose modestly to 268.57 (9.86 bb) from 267.34 mmt. Wheat prices were down prior to the report release and ended up a few cents in the red by the end of the day.

The September USDA and WASDE reports shocked many traders, especially those who were short in soybeans, sending that market and corn, in sympathy, sharply higher. With soybean ending stocks falling to the lowest level in seven years, any further fall in soybean yields would give us one of the tightest stocks situations in years. Perhaps the euphoria will be short-lived, as there remain concerns due to demand implications of the sluggish Chinese economy, and Brazil -- with good weather, of course -- is projected to have a massive, record soy crop of 151 mmt (5.55 bb) in 2022-23. There is also a chance that, with hot and dry weather impacting the western and Southern Plains corn crop, we could see yield fall even further in future reports. 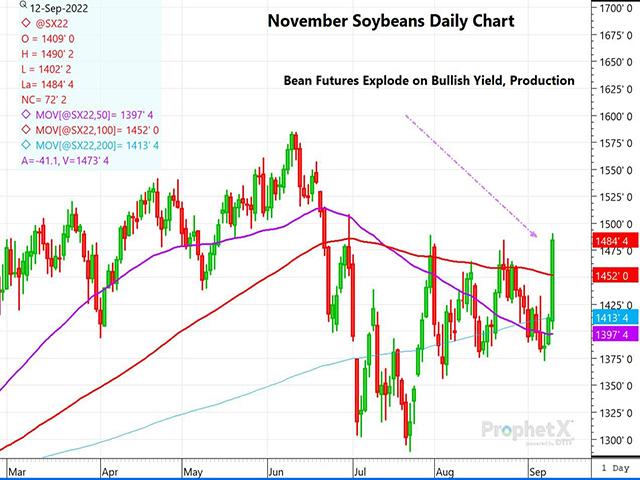