It has been approximately five months of complete dryness in central Brazil. Producers who can get away with double-cropping soybeans in the Southern Hemisphere spring and early summer with corn in the late summer into the winter rely upon consistent and heavy rains from late September through early May.

This large production area is so close to the equator that "winter" and "summer" need quotation marks. Temperatures are nearly constant in the upper 80s Fahrenheit into the middle 90s every day throughout the year.

Instead, this tropical location has a distinct dry season and wet season. During the dry season, it almost never rains and over the course of about five months, soils become almost completely dry. Once the wet season begins, it rains almost every other day. Producers wait for the first couple of inches of rain to fall to recharge topsoils and bring enough moisture for uniform germination before chancing their crop with unevenness if rains hold off. That typically starts during the last few days of September in central Brazil and producers watch that closely.

If there are delays to the start of the wet season, it automatically pushes back corn planting by the same amount. Producers in Brazil can usually count on good rains through April before drying up in early May. That means corn can get into pollination and perhaps early grain fill with good soil moisture before needing to rely on stored water in the soils to finish filling grain. Delays to planting can put that at risk, potentially leading to corn needing to rely on that stored moisture during pollination or even late stages of vegetative growth, which would cause much more damage.

The main reason why the wet seasons have been short the last two seasons is due to the influence of La Nina, which correlates with a shortened wet season in central Brazil. And unfortunately for Brazilian farmers, a third-straight La Nina season is expected to be in place through at least January by most long-range models. That could mean a delayed start to the wet season yet again, so we are paying very close attention to potential showers for central Brazil.

There are some signs of life in the models during the next couple of weeks. All winter long, cold fronts have been moving through Argentina and stalling in southern Brazil, bringing good rains but low temperatures to the region. Fronts have not been able to really penetrate into central Brazil, but that is typical for this time of year. Starting this weekend, a cold front will stall out in southern Brazil with scattered showers going into the early parts of next week. However, runs of both the American GFS and European have the front penetrating a bit farther north around Sept. 14-15, which would be a good 10-12 days prior to the typical start date for enhanced rainfall due to the wet season. The showers that are forecast to come with the front are not much. Models are suggesting less than 20 millimeters (0.8 inches) is likely, and would not mark the start of the wet season. That can be defined as the first 30 millimeters (1.2 inches) of accumulation. However, both the GFS and European models have additional chances for isolated showers coming that weekend and the following week with another couple of disturbances. In combination, that might be enough to name the start of the wet season on time in a few locations. As of now, it does not look like a widespread declaration would be made.

Either way, producers may opt to wait until rains are a bit more consistent anyway, to ensure good germination. A few days late would not be the largest of concerns. However, the past two La Nina growing seasons are likely fresh on the minds of producers that have been seeing shortened wet seasons and variable yields, so they may attempt to plant faster than normal to make the most out of the moisture when they get it.

The forecast from DTN for the rest of the spring season and into early winter is relatively dry, especially across southern Brazil. Producers who share that concern will be nervous for their crops all season long. 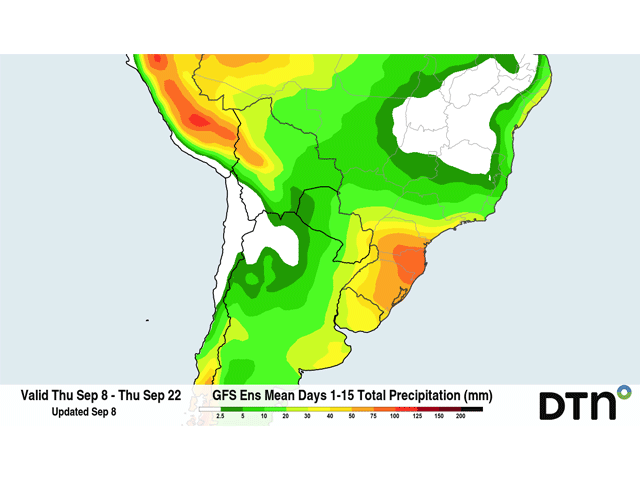