Weather headlines in the Southern Plains during the last two weeks of August featured rain -- a big change from nothing but drought for much of the first seven and a half months of this year. The big winner in this moisture bonanza was Texas with rainfall totals exceeding 10 inches in parts of north central, northeastern and southern Texas, with preliminary rainfall totals of 4 to 6 inches for the month of August in many other locales of the state.

That heavy rain follows a very dry stretch. For example, the 12 months from Aug. 17, 2021 to Aug. 16, 2022 saw around a 15-inch rainfall deficit in the Dallas region. The rain has produced drought improvement of two categories in many areas of Texas according to the U.S. Drought Monitor.

However, while Texas has seen drought easing because of generous late summer rain, the rest of the Southern Plains has been largely left out. The Aug. 30, 2022 Drought Monitor noted severe to exceptional drought still in effect in Oklahoma and Kansas. The worst category of drought, exceptional drought, covers more than 10% of Kansas, with that harsh category almost entirely in the southwestern part of the state.

Those areas are prime grain, livestock and cotton production areas, and winter wheat seeding is just around the corner but with very little moisture for starting the new winter wheat crop.

These circumstances continue showing the imprint of the multi-year La Nina cooling event in the waters of the equatorial Pacific Ocean. The NOAA Climate Prediction Center (CPC) maintains a La Nina Advisory. The fall season (September, October, November) has an 86% probability of La Nina. That value declines to 60% during December 2022 to February 2023. The prospect of the Pacific waters warming to El Nino levels by the coming winter is considered to be unlikely.

A third La Nina pattern in winter would favor another dry winter ahead for the Southern Plains and the Southwest U.S. due to La Nina conditions maintaining a winter storm track that misses the Southern Plains. This scenario is especially concerning for the primary crop production areas of the Southern Plains which were left out of the August rain path. Forecast guidance for the fall season indicates a mainly warm and dry pattern -- above-normal temperatures and below-normal precipitation -- in the Southern Plains.

Conclusion: Heavy rain in August brought some notable drought easing in Texas but very little benefit elsewhere in the Southern Plains. A third straight year of La Nina in the Pacific Ocean strongly suggests that drought-affected crop and livestock areas of the region will continue with dryness challenges through the rest of this calendar year. 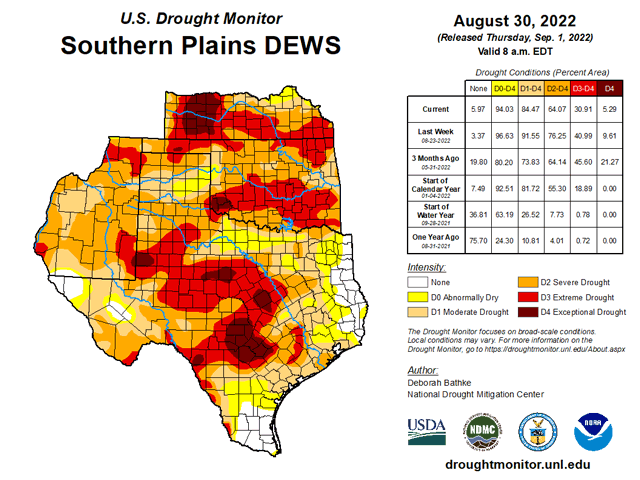