Speaking Aug. 25 at an event put on by The Chicago Council on Global Affairs, she was asked what she made of China officials recently visiting Africa and waiving the debt of 17 African nations, along with offering billions of dollars in relief through the International Monetary Fund. She was questioned about the implications of the deepening relationship between China and Africa.

The ambassador was blunt. "Well, I would say, sort of off the cuff, is it's about time China's stepped up to the plate and started to provide assistance because they have contributed to the extensive debt of many of these African countries." She added that without China's debt relief, a lot of countries would sink -- and some already have.

"We think China can play a much more significant role in helping to address the global food insecurity crisis. China has been buying up wheat to build its own stockpiles; we think they should be pushing more of that wheat out into other countries and that they should play a much more significant role in supporting these countries that they have, unfortunately, contributed to their debt crisis."

Thomas-Greenfield added the World Bank and IMF also need to play a much more aggressive role in addressing the debt crisis in countries as part of dealing with global food insecurity.

ROLE OF THE US AND AMERICANS

But she also talked about why Americans should care about the global food security crisis.

She noted that in 1922, the council was formed as a response to pervasive isolationism, when "many of the leaders of the city and this country thought the best foreign policy was to avoid alliances and diplomatic relations and bury their heads in the sand ....

"A century later, with COVID conflicts and climate change, it might be tempting to bury our heads in the sand again, to buy into the false dichotomy that we ought to focus on our own problems, and not on the problems of others," she said.

"But the truth is our greatest challenges are shared. Our world is deeply interconnected. The right policies abroad help us all here at home. And the food insecurity crisis offers an urgent example. Right now, the world is experiencing the worst food security crisis any of us have ever seen. And according to the World Food Program ... over 828 million people go to bed hungry every night -- 828 million people."

The reasons are myriad, she explained. "COVID has strained supply lines, energy costs have made it more expensive to produce and ship food. Rising temperatures and severe droughts have destroyed crops and left fields fallow. And in many conflicts around the world, food is intentionally blocked or destroyed, and dictators use starvation as a weapon of war," she said.

Thomas-Greenfield especially focused on how much Russia's military actions against Ukraine have contributed to the food crisis.

"We see this now, no more acutely than with Russia's unprovoked invasion of Ukraine. Before the war, Russia and Ukraine accounted for almost a quarter of global grain exports. But now Ukraine's once rolling wheat fields have become battlefields."

Her speech came the same day that Ukraine's Zaporizhzhia nuclear power plant was temporarily cut off from its electric grid for the first time in its history, because of fire damage. Also, Russian leader Vladimir Putin ordered another 137,000 soldiers be added to the country's 1.5 million man army, taking effect on Jan. 1.

WHY CARE ABOUT UKRAINE

She stressed how even though Ukraine is far away all Americans should care about what is happening and what Russia is doing.

While the invasion has created the perfect storm for the food crisis, and high food prices in a number of countries, the Black Sea is now open again to ships exporting Ukraine grain.

The ambassador stressed, however, that the exports are just a small step to address the problems. "The answer is for Russia to stop this unprovoked attack on Ukraine ... Russia has attacked Ukrainian farms, they've stolen wheat from their silos. And until recently, they blocked the access to the Black Sea. The impact is long term. And it's going to take several years before we're able to start to address the impact that they've had on this. ... We have to continue the effort and do everything possible because again, this has had a global impact."

US AND WORLD EFFORTS

Thomas-Greenfield noted some of the things the Biden administration has done to tackle the food security crisis, such as having more than 100 countries signed on to forge a roadmap for global food security and have a common agenda to address it. She added the G7 Summit has committed $4.5 billion, with more than half from the U.S. There are also other programs such as the Farmer-to-Farmer program where U.S. farmers provide technical assistance to farmers in other countries.

She said American farmers have similar challenges to farmers in other areas of the world, including rising fertilizer costs and extreme weather.

Thomas-Greenfield said there have been actions taken to help transform America's food systems -- such as building new markets, increasing local food production, and investing toward climate resiliency, and investing up to $500 million in fertilizer production -- as well as meeting a global responsibility through exports and donations to ensure global food security.

As for what more America's farmers can do, they can continue to share their knowledge with farmers in other countries, adopt technology to support better productivity here, and produce more food to be exported to places affected by climate change.

She visited some African countries earlier in August to see the crisis firsthand, from farmers to sellers. She gave an example of one woman she met who farms 5 acres, but this year could only plant 1 acre because she didn't have the money to pay for higher-priced fertilizer.

"And I heard from all of them, how the costs were going up, and how their trust in the international system was going down."

WORLD LOST TRUST IN US

Thomas-Greenfield was asked what the prior administration's impact had been on international relationships and what it was like now for the U.S. and her to be more involved again at the United Nations and UN Security Council.

She said the U.S. needs to be there in a strong way. "And there was a general sense when I arrived in New York in February 2021 that we had been out of place and that our leadership had not been particularly present."

The world lost its trust in the U.S. -- when the new Biden administration took over, she and her colleagues felt the world embraced them on the multilateral stage, "But there was also a lack of trust, and a lack of confidence, and whether our words could be trusted, whether we were back for good or this was temporary, and that's still out there. And so, people, while they were embracing us, were nervous about us, you know, whether you know this commitment that we're making now, is it a commitment that we can trust, that you guys are going to honor? How long are you back for?" Re-establishing relationships is being done.

The timing was critical for the U.S. to be involved again because the world is looking for leadership from the U.S. on "difficult issues" the world faces related to peace and security.

She admitted the Ukraine crisis has been a test of the Security Council's strength -- especially since its permanent members include China and Russia.

However, she said the Security Council must find ways to work together with, as well as around, Russia.

Thomas-Greenfield talked about how the U.S. and more than 140 other countries condemned Russia for its actions against Ukraine, as well as more than 120 countries have developed a humanitarian response for Ukraine. She added that the UN is working every day to isolate the Russians from other organizations and that Russia will be held accountable for what it has done. "They're not getting away with murder without the condemnation."

She acknowledged, "We're not a perfect institution. But it is what we have to deal with issues of peace and security. And I think we have been extraordinarily successful. But more work needs to be done."

Asked about the worsening situation at the nuclear plant in Ukraine, she stressed Russia needs to remove itself from the plant, as well as end its disinformation campaign, and allow an investigation of the plant by the International Atomic Energy Agency (IAEA).

She said that while Russia has agreed to an investigation, "We're dealing with a pariah state, we're dealing with the Russians. We can never trust their word. We have to judge them by their actions, the actions that ... show that again, they are not to be trusted." 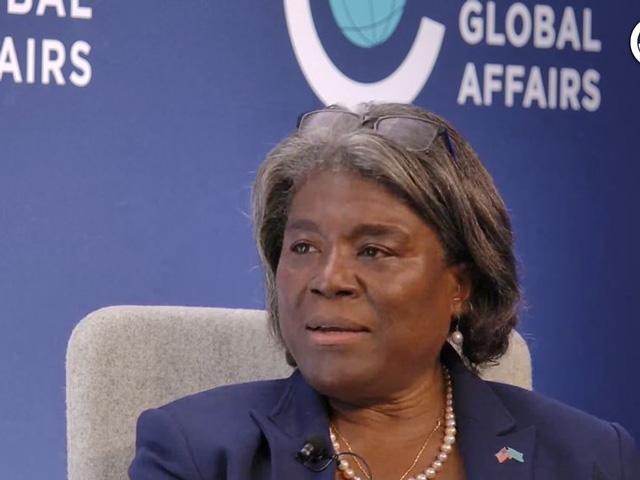