VOLGA, S.D. (DTN) -- The next farm bill is currently top of the list of what's on the minds of Farm Bureau members in the country halfway through the year, according to American Farm Bureau Vice President Scott VanderWal.

However, farmers are also facing other issues, including inflation, high input costs, the need for more immigrant workers, WOTUS policy, protecting crop insurance, and being able to retain using the chemicals they need for fields.

On July 23, DTN interviewed VanderWal about these and other issues on the minds of Farm Bureau members halfway through the year. VanderWal is a third-generation corn and soybean producer who also custom feeds cattle. He is also the president of the South Dakota Farm Bureau.

During the AFBF annual meeting in January that was held in Atlanta, some of the biggest topics discussed were how to support cattle market reform and the desire for higher commodity price protections. (See DTN Ag Policy Editor Chris Clayton's story from earlier this year at https://www.dtnpf.com/….)

The following Q&A was with VanderWal on his farm near Volga, in east-central South Dakota, as he talked about the farm bill, labor concerns, worry about high input costs and other issues. To see the video taped with him go to: https://www.dtnpf.com/… .

Q: What are some of the issues?

A: Some of the issues that are on our members' minds right now, probably the top of the list would be the farm bill, as Congress starts down that road to renew ... the farm bill that will expire in September of 2023. They're a little bit late getting started on it, but they're starting to think about it. And we've had our members giving input for quite some time now, several months telling us what they like about the current farm bill, any changes they would like to see. Most of the people are telling us let's preserve crop insurance and make sure we do no harm. So that's the top of the list.

And then all the other ag groups agree with us on that as well. And that's all about national security, by way of food security, making sure that we can continue to feed our country, no matter what else happens in the world. And it's a program that works. It's federally subsidized to some extent. But it's in the interest of making sure that our citizens are well-fed at a reasonable cost.

Beyond that, the labor bill that's in progress and Congress, (it) passed the House. It's gone to the Senate, and we're trying to make it better in the Senate, for producers. But I don't know what the chances are of a lot of progress on that at the end of the year here, as the Senate has very few working days left the rest of this year. They're all concerned about the elections that are going to be happening, and a lot of other big issues that they're working on.

Q: Tell us a bit more about the farm labor issue and whether you've seen any movement on that.

A: Well, the labor issue is very important to anybody that hires immigrant labor, and it comes down to the H-2A (temporary agricultural worker) program. Right now, you can't use that for year-round workers. So, for instance, in dairies, they can't use H-2A workers for milking cows. And they get in trouble if they do. Sourcing workers: There's another issue. The number of visas that are currently allowed is another issue. Those are all things that we have with the current bill. That's in progress. And we're trying to address the issues that we have with that.

Q: How much is it on farmers' minds right now (regarding) what's happening with Ukraine and Russia, and how it's affecting their businesses?

A: That's just part of the story. The Ukraine/Russia thing. Inflation and higher costs, I think are really top of mind for farmers. Here on our farm, liquid nitrogen tripled in price from the (2021) levels that we had to pay. Phosphorus and potassium doubled. Lots of other chemicals went up. Roundup was ... hard to get, not only hard to get, but the price increased as well. Liberty the same way, it just absolutely went through the roof. So, inflation is really bothering us, along with energy prices that really have climbed. I think our overall cost here in South Dakota for raising corn went up over $200 an acre from 2021. So, we need these high prices that we have in commodities to really come out. So, we're hoping that'll moderate -- there's just so many things going on ... that really didn't have to happen, (such as) the energy costs. We should be telling our energy producers, whether it's renewable producers, or fossil fuel producers in this country, do what you do best, produce that energy, get it out here so people can use it, because that's what drives our economy in this country.

Q: How much did it affect you as a cattle grower when commodity prices went up, but you were also still trying to feed your cattle?

A: Yeah, it was tough on cattle feeders. We custom feed, so that's a little thing that takes some risk away from us. But you still have to make them break even, and the people that put cattle on our lots have to have a margin. And ... that's been tough to get this summer. And now things have changed a little bit. Corn prices have backed off a little bit and that's helping. And certainly, it's nice and we can all make money at the same time. But it seems like as prices go up and down, we all get our turn to make money and we also get our turn to lose money.

Q: You talked earlier about crop insurance. How big of an issue is it this year, especially because of the weather and some of the extremes that you're having (in) different parts of the country?

A: I think it just shows how important crop insurance is with the weather gyrations we've had. You know, when we had that derecho (in South Dakota) on May 12 (2022), we didn't have any crops up, so there was nothing to hurt. But boy, the grain bins and center pivots and buildings just got torn apart something crazy, like we've never seen in this part of the country. And if it had been in July or August, like it was in Iowa in 2020, we'd have had a major mess just like they did. So, it really shows how important it is to manage your risk, whether it's through crop insurance or other insurance for your other property. You've got to manage that risk because there's so many dollars involved and things are really volatile -- the weather, the economy -- there's just so many question marks and unanswered questions and uncertainty right now.

Q: What are some of the other issues?

A: So, there's a couple other issues that are on Farm Bureau members' minds as well. First of all is waters of the U.S. -- the U.S. Navigable Waters Protection Act that was passed when President (Donald) Trump was in office was a very good compromise. And we thought it was very good policy. We didn't have to figure it out or didn't have to hire lawyers and engineers to figure out what parts of our land were federally regulated. But now ... the new administration has basically thrown that out ... They've been having listening sessions, roundtable discussions. But they indicate that they're heading back to what they say is something before the 2015 rule, but maybe more like the '15 rule, which we didn't like at all, because it was so ambiguous, and you didn't know where we stood. So, we're experiencing regulatory whiplash at its finest right now, just one extreme to the other.

That's one thing that really concerns us is that they've said that the data that they've gathered from the roundtable discussions this winter is not going to be used in writing the rule. Well, we thought we were giving input that would be used for that. So, that's another question mark. And we're really concerned about what's going to happen with that.

And if we were to lose those sort of things, (and) increased regulations significantly, that would be a huge problem for us, and really cut into profitability. Some of the assumptions that are being made about use rates, they look at maximum use rates and maximum number of times that you could use it.

In fact, I saw one thing where they're taking the use rate of Roundup and assuming we use it every two weeks. We don't do that, on corn and soybeans anyway. It's just not that much of a load on the environment. So, we need to use accurate assumptions and we need to use sound science and we're very concerned that EPA isn't necessarily doing that right now, and strongly encourage them to really go back and look at that. 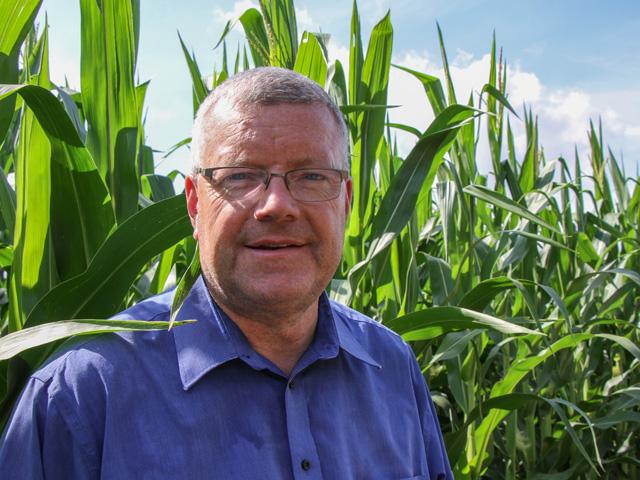