Do kids today even know what it was like to see "noise" on the television as you clicked from one channel to the other channel? As you desperately tried to make out the figure of Joe Montana behind the swirling streams of white and black fuzz? What was that John Madden just said? "Touchdown?" "No touchdown?" Hard to hear past the constant crackling "crhhrrrshh" coming out of the speaker.

But amidst all the static, there was a picture within. There was information you wanted to know, and that's why you kept watching, as long as you could stand it.

Market news is a lot like that: plenty of noise that's unhelpful and distracting, but there are some flashes of useful information too. The trick is to figure out which is which. On any given morning, someone who's trading corn might learn how much the market moved the previous day on how much trading volume, what the price of gold is, the weather forecast for the next seven days, how many futures positions were sold by hedge funds during the past week, that the Relative Strength Index on the chart is only 36.02 and the average estimate for the size of the Federal Reserve's next interest rate change. Any one of these signals could be interpreted as a reason to buy or to sell corn, but not all of them will provide accurate predictions of future price direction. Not all of them will trigger successful trades. Not all of them will make a trader profitable.

The concept of noise traders first appeared in academic literature in 1990 (https://www.journals.uchicago.edu/…) when Harvard researchers showed that "irrational noise traders with erroneous stochastic beliefs" acting in a market can indeed influence prices, but even by creating more volatile churn in a market, these traders may nevertheless be able to make some profits. In these models, "noise traders" were basically defined as stock market traders who used technical chart signals to predict stock prices rather than fundamental discounted cash flow valuations. Or, as Investopedia defines noise traders, they're "investors who make decisions to buy or sell based on factors they believe to be helpful but, in reality, will give them no better returns than random choices."

More recently, the economist Daniel Kahneman has popularized the idea of reducing noise in all types of decision making (not just for buying or selling in a market) in his 2021 book "Noise: A Flaw in Human Judgement." Here, noise is defined as any variability in judgements that should otherwise be identical, particularly when the variability is coming from unconscious bias.

Agricultural producers and traders carry bias into every buy or sell decision they make. For producers, the bias is usually a bullish hopefulness (or desperation) that prices will go up, whether justified or not. A bullish biased trader can pick out any two points on a chart, draw a line between them and convince herself the trend is pointing upward and this is the wrong time to sell. That's a noise trader. Meanwhile, someone less biased may do a better job of sifting out the noise or requiring more than one confirming signal to feel confident about market direction.

It's particularly difficult to sift out and ignore noise during a weather market like the one we're experiencing for row crops right now. If the price of soybeans suddenly shifted 50 cents per bushel on any given day back in the boring month of January 2020, for instance, that movement itself would have been an important piece of information. Today, a 50-cent movement on the soybean chart is so common, it's just "noise." There is a sense that other traders must be buying or selling based on changing weather forecasts, but which weather forecast? The one that has meteorologists calling for drought-busting rains across western Kansas, or the one calling for a quick return to hot and dry conditions in Illinois? Weather forecasts themselves require a lot of sifting, especially across all the broad growing regions throughout the world.

Fortunately, row crop conditions in the United States are an important-enough fundamental factor, we can find multiple sources of reliable information and don't have to rely only on piecing together bits of noise. One photograph on Twitter showed rolling corn leaves on short plants growing out of cracked soil -- that's tragic and distressing to see, but from a market perspective, the one photo alone may be just one "crhrrshh" of staticky noise. If the person who posted that photo buys corn futures based on the condition of just that one struggling field, that's called "backyarditis," or forming a market outlook based on a local concern in one's own backyard, rather than considering broader fundamental supply and demand. However, when there are enough photos like that coming from enough fields across the Western Corn Belt, and when the overall corn condition ratings for the state of Kansas collapse from one week to the next in late July, going from 22% rated "poor" or "very poor" on July 17 to now 31% rated "poor" or "very poor" as of July 24, and this deterioration has contributed to the nationwide U.S. crop condition shifting by 3 percentage points ... that's not "noise." That's fundamental supply and demand information.

Noise traders create a lot of churn and volatility in a market and may cause prices to deviate away from their fundamentally justified levels. However, even the bona-fide hedgers in a grain market -- the farmers and the end users themselves -- may be considered noise traders from time to time. 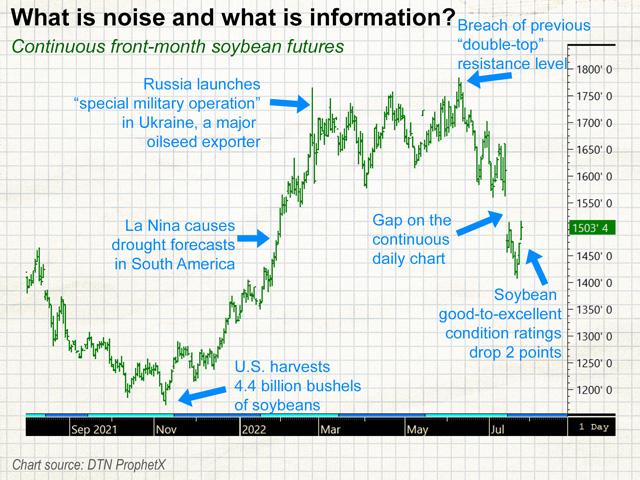