OMAHA (DTN) -- Cattle and calves on feed for the slaughter market in the United States for feedlots with capacity of 1,000 or more head totaled 11.8 million head on June 1, 2022. The inventory was 1% above June 1, 2021. This is the highest June 1 inventory since the series began in 1996, USDA NASS reported on Friday.

"For the placement division, the numbers seemed to pass the 'sniff' test. Given the timely rains that parts of the country were blessed with, it comes as no surprise that placements were 2% lower at 1.87 million head, as ranchers were able to now kick cattle out onto grass. And given that cattle have been pushed through the market earlier than normal because of limited feed earlier this year and thin supplies, it comes as no surprise that the weight divisions of cattle weighing under 600 pounds and those weighing 600 to 699 pounds were the only classes that saw an increase from a year ago.

"Marketings totaling 1.91 million head and being 2% higher than a year ago falls perfectly in line with the market's recent history, as processing speeds have run relentlessly.

"But where I struggle with this report is: No. 1) How can Nebraska have record on-feed numbers but the cash market be so current that there's a $12 premium in this week's market because supplies of market-ready cattle in the North are so thin? No. 2) How can May's disappearances be 13% higher than a year ago and total 76,000 head? (The extreme heat wave that killed cattle in Kansas was in June, not May.)" 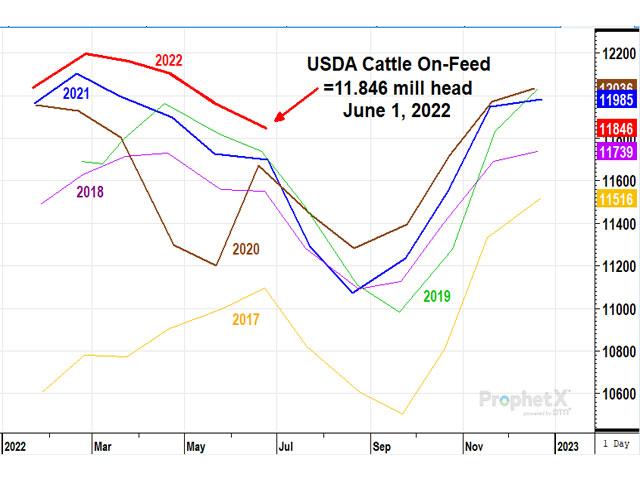