WASHINGTON (DTN) -- The problems the rice industry is experiencing became the center of attention Thursday at a House Agriculture General Farm Commodities and Risk Management Subcommittee hearing on the commodity and crop insurance titles of the farm bill.

Joe Outlaw, a professor at Texas A&M University's Agricultural and Food Policy Center, said data from representative farms the center monitors show two-thirds of the country's rice farmers face losses in 2022 and "will not cash flow this year."

Analysts have said the prices of other commodities rose along with input prices, but rice prices did not.

Outlaw said it would be important to provide aid to rice farmers through some type of targeted legislation. "Unless we want to lose producers, we need to provide help," he said.

Outlaw added, "There are a lot of reasons why rice is different, but certainly I would think there would be cause for this body and the larger body (Congress) to do something this year."

But there did not seem to be a strong view among either the members of the subcommittee or the witnesses about what form any aid should take.

USA Rice, a lobbying group, has noted that Agriculture Secretary Tom Vilsack has committed himself to helping rice producers, and has written Vilsack about providing aid.

Looking at overall changes in costs, Outlaw's written testimony also showed the average cost increases for 64 representative farmers he and other A&M economists track. Nitrogen fertilizer prices are nearly 134% higher than last year; phosphorus and potassium are nearly 93% higher; fuel is nearly 87% higher; herbicide is 64% higher; insecticide is 40% higher; and seed costs are 17% higher. Those higher input prices are expected to result in lower net cash farm income overall in 2022 compared to 2021 despite higher prices.

The subcommittee members and the economists who testified also discussed the next farm bill.

Addressing the ad hoc disaster programs Congress has passed, Outlaw said it would be helpful to farmers if there "were a plan in place for natural disasters." But Joseph Janzen, a professor at the University of Illinois Urbana-Champaign, said it will be difficult to define what should be included in a disaster program.

"That is why the programs have been ad hoc," Janzen noted.

House members also focused on Price Loss Coverage reference prices being too low and the concerns about both a decline in commodity prices and the costs of production.

"We have a situation right now where prices are high, but people are worried about price declines," Janzen said.

On the safety net, Outlaw added, "We need to cover a good portion of the costs if we are going to keep people producing in this country."

Rep. Glenn "GT" Thompson, R-Pa., ranking member for the full committee, asked what it would look like to create a program that focuses on crop input costs much like what Congress did with the Dairy Margin Coverage plan.

Outlaw responded, "Clearly the benefit is it would take into benefit both the cost side and the revenue side. We're largely protective of the revenue side in this country."

Outlaw added it might seem "relatively easy" on the surface, but each commodity is different so it might be necessary to create a pilot program for certain commodities. "We would have to be really careful to make sure it's balanced."

One difficulty in trying to index reference prices or deal with costs is official data from USDA often lags in time.

Robert Craven, an Extension economist for the Center for Farm Financial Management at the University of Minnesota, noted to lawmakers that right now the costs of production for corn in 2023 in Minnesota pencil out to about $5.18 a bushel.

Janzen added that commodity prices now are projected to remain high for the 2023 crops, which wouldn't cause PLC to kick in. "Obviously the biggest factor is the war in Ukraine," Janzen said. "Some resolution to that conflict will lower commodity prices, both on the output side and the input side."

Rep. David Rouzer, R-N.C., also raised the specter of returning to direct payments, which operated from 2002 to 2014. He noted there was not as much ad-hoc assistance when Congress had the program, which cost about $5 billion a year.

"Maybe now is a good time to reinstitute that given the input costs that remain exceptionally high," Rouzer said.

While direct payments were compliant with the World Trade Organization, the problem with them was public opinion of providing consistent payments to farmers during good years when farmers did not need them. 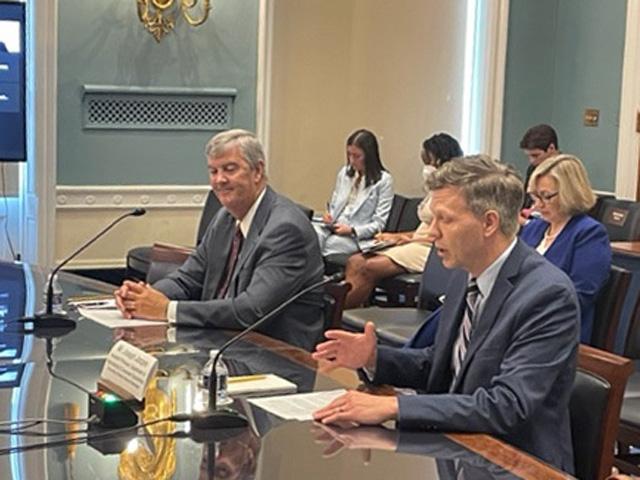