LINCOLN, Neb. (DTN) -- Didion Milling Inc. and six employees violated federal safety laws that lead to the deaths of five employees and 12 injuries in a 2017 explosion of the company's corn milling plant in Cambria, Wisconsin, according to a federal indictment announced by the Department of Justice on Friday.

The indictment handed down by a federal grand jury in Madison, Wisconsin, on Wednesday alleges the company and those employees conspired to conceal federal workplace safety violations at the plant, where the explosion occurred on May 31, 2017. The indictment also alleges fraud, air pollution and obstruction of justice.

The DOJ said the indictment alleges the company, its vice president of operations, Derrick Clark, 48; former food safety superintendent, Shawn Mesner, 44; former shift superintendent, Anthony Hess, 54; and former shift superintendent, Joel Niemeyer, 39, "conspired to commit fraud by agreeing to take deceptive measures to conceal the failure to adhere to food safety procedures at the mill, including by falsifying the cleaning logbook to conceal the fact that DMI was not following its written cleaning schedule, so that DMI could maintain its food safety certification and continue to sell its products to food and beverage manufacturers."

Didion Milling, Clark, Mesner, Hess and Niemeyer, along with the company's former environmental coordinators, James Lenz, 65; and Joseph Winch, 66; also were indicted for conspiracy to "commit federal offenses in order to conceal violations and unsafe conditions" from auditors and government agencies.

"The alleged conspiracy included an agreement to falsify cleaning logs and baghouse monitoring logs, submit false environmental compliance certifications, and provide false testimony on matters within the jurisdictions of the Occupational Safety and Health Administration and the Environmental Protection Agency," the DOJ said in the news release.

In addition, the DOJ said Hess, Clark and the company were charged with obstruction of justice for "providing false and misleading testimony" to OSHA after the May 2017 explosion "concerning their knowledge of combustible dust hazards" at the plant.

In a statement to DTN, the company said it continues to believe crimes were not committed leading up to the explosion.

"Our thoughts and prayers remain strong for the families, friends, and co-workers of those affected by the accident," the company said.

"The tragic accident deeply affected everyone at Didion. We are disappointed the government has decided to pursue these unwarranted charges. What happened on May 31, five years ago was a horrible accident, not a criminal act. While we have cooperated fully with the investigation since day one, we now must respond with a strong, vigorous defense for the company and our team.

"As a family-owned business for 50 years, we have a culture of safety and quality engrained in all we do. We take care of one another in the Didion family and we continue to invest in safety and quality because it is the right thing to do."

Two former company supervisors Michael Bright, 36, and Nicholas Booker, 42, previously pleaded guilty to related charges in the U.S. District Court for the Western District of Wisconsin, the DOJ said in a news release. They pleaded guilty to making false entries in the company's cleaning logbook and the plant's baghouse log.

According to the indictment, Didion Milling Inc. was required to "regularly clean dust accumulations" from inside the mill to prevent both food safety and quality issues and to "remove accumulations that could fuel combustible dust explosions."

Although Didion Milling was required to document the completion of routine cleaning at the mill as well as routine monitoring of baghouses to prevent dust emissions outside of the mill, the indictment alleges the company "willfully violated two federal safety standards" in the Occupational Safety and Health Act.

The indictment said the company failed to develop and implement a written program to "effectively prevent and remove combustible grain dust accumulations," the DOJ said, and to install explosion venting or explosion suppression on a dust filter collector -- "thereby causing the deaths of five employees due to a combustible dust explosion at DMI's corn mill on May 31, 2017."

If convicted of the OSHA Act offenses, DOJ said the company could be ordered to make restitution to victims, pay fines and be sentenced to corporate probation.

If convicted of fraud conspiracy, DOJ said, a defendant could be sentenced up to 20 years in prison, ordered to pay fines up to $1 million and to forfeit assets "derived from fraud."

Convictions for conspiracy to commit federal offenses and other offenses range from five to 20 years in prison and up to $1 million in fines, according to DOJ. 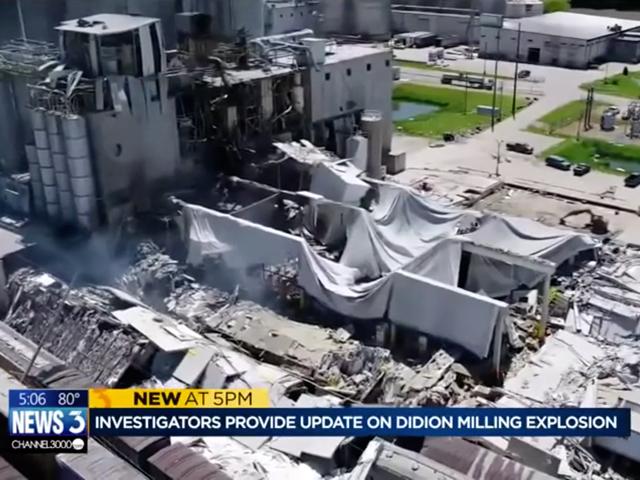