** EDITOR'S NOTE: As we went to press, we learned that Aaron Reding had passed away. We extend our deepest sympathies to his family. **

Aaron Reding loves most everything about farming -- the agronomy, the satisfaction of harvest and the long-term relationships with landowners, customers and co-workers. The one thing he loves best, hands down, is planting corn.

"I got to be the corn guy," says Reding, 47, who started farming with his parents in 1996 in Howardstown, Kentucky, after graduating from the University of Kentucky with a degree in animal science. He laughs: "Soybeans are important, too, don't want to anger my friends with the soybean association. I just always really enjoyed soil fertility with corn, figuring out how to do it a little better each year."

Reding smiles with no hint of melancholy or regret. He considers himself very fortunate even though his corn-planting days are behind him. Instead of riding in the cab of a combine, Reding now works from a wheelchair in the farm office, having been diagnosed with amyotrophic lateral sclerosis, or ALS, in 2009.

The disease has taken away the dexterity in his fingers, but he can still use his hands with an exaggerated shrug of his shoulder to slide a cell phone up his arm to make a call. Reding can also move his hands and arms with his shoulder muscles to manipulate a computer mouse.

That he even has these skills 13 years after his ALS diagnosis is amazing. More impressive is the fact that Reding is largely still running the 25,000-acre Homestead Family Farms that he, along with parents, Mark and Barb Reding, and several of eight siblings, grew from the 600 acres with 300 sows it was 25 years ago.

The operation's growth is primarily due to Reding's abilities and instincts regarding three things. First, soft-spoken and personable, he was a natural going door-to-door introducing himself to potential landowners to let them know a young farmer was interested in renting their land if it ever became available.

Second, he saw the potential for growing row crops, particularly corn, in the hilly, fertile acres of pastureland in central Kentucky.

Lastly, he saw a market for corn and other crops in the numerous Kentucky distilleries that, at the time, imported most of their supply from Indiana. As with his countless calls on potential landowners, Reding was unafraid to ask distilleries, repeatedly, to give him a chance to produce locally the crops they needed.

"I persisted a lot," Reding says. His persuasion and hard work continued long after he was diagnosed with ALS. He signed his first corn contract with Barton 1792 Distillery in 1999, when the farm was about 900 acres. Now, Homestead Family Farms hauls between six to nine semiloads of corn daily -- that's right, daily -- to one of several distilleries.

Getting sick didn't stop the farm's growth, but it certainly forced planning for the future. ALS is a progressive neurodegenerative disease that attacks cells in the brain and spinal cord needed to keep muscles moving, leading to weakness and paralysis. There is no known cure, and the life expectancy is generally less than three years. A cruel irony of the disease is that while the body can deteriorate quickly, the brain continues to function near normal.

"For a lot of people, sadly, it only takes a couple of years from first symptoms to death," Reding explains. "I can't say enough about how blessed I've been. I feel like it has bought us a lot more time."

His wife, Ashley, who is also the farm's human resources and communications director, agrees. "I hope we're able to continue doing what we've done for the legacy of what Aaron started, for the kids and the people that work here," she says.

Aaron and Ashley met in college, the result, she says, of "conspiratorial" roommates. Following an initial meeting, Aaron asked Ashley for a date even though he was going home on weekends to help with harvest (it was September).

Ashley's birthday was a week prior to their scheduled first date, and somehow Aaron knew. "He came bearing a cake at midnight on my birthday," she says. "He and his roommates even cleaned up all the dishes before leaving."

Impression made. Ashley smiles and adds a caveat: "Whether he or his mother actually baked the cake is still an open question."

Down the drive and across the road from the office is the farm's main grain-storage site that handles 1.5 million bushels. A crew is working on a new bin that will nudge the capacity even higher. The storage operation is managed by Reding's younger sister, Anna Reding, a trained certified nursing assistant who happily transitioned back to the farm full time as his illness worsened.

It is to Anna that Reding bequeathed his coveted corn-planting job. "I'm still turning to Aaron all the time for advice," says Anna after climbing down from the top of a 325,000-bushel bin. "I call and text him saying, 'How did you plant this field again?'" There's a catch in her voice. "What am I going to do when he's not here?"

PLAN FOR THE FUTURE

What the family has done is plan realistically for the future. Anna plays a big role, as does Aaron's brother-in-law, Matt Falk. As the farm's chief financial officer, Falk has helped direct sound financial decisions that included, among other things, trimming back the operation by several thousand acres in recent years. Reding's parents remain part owners of the farm, as well.

About the time Reding became wheelchair bound, the family joined FamilyFarms Group, a national farm business management firm of about 90 operations. The group has helped Homestead Family Farms plan for the transition while offering financial and personnel guidance for managing growth.

In the office next door to Reding's, in the house converted into the farm's headquarters, operations manager Brian Kamuf says Reding's ability to cultivate relationships with landowners is impressive.

"He treats everyone as a friend and is pretty laid back," says Kamuf, who moved with his family three years ago from western Kentucky to come work for the Reding family. "I hope I can do it the way he does, because it seems to work."

That is no small feat. Homestead Family Farms rents farmland from more than 200 landowners.

Kamuf is designated as the general manager who will take over many of Reding's duties (and already has) as the latter's mental and physical abilities continue to deteriorate. Did Kamuf have concerns about signing on to manage a family operation in which he is not a family member? After all, three of Reding's siblings, as well as two in-laws, are employed at the farm.

"We talked a lot about those questions," says Kamuf, whose son Clayton, 10, found instant on-farm friends with Aaron and Ashley's sons, Andrew, 16, and Adam, 13. "We have a plan, and so far, it has worked well. Aaron is very smart, and I've learned a lot."

On most weekdays, Aaron and Ashley arrive at the office every morning. The health challenges they face don't belong to Reding alone. Ashley manages her diabetes, and daughter, Kathryn, 21, has been dealing with numerous medical issues for nearly a decade.

In the early years after Reding's diagnosis, friends and acquaintances would comment that the family should spend as much time together as possible, the implication being that they shouldn't work so much or should even quit farming.

"That's all well and good," says Ashley, "but we've got 40 employees that count on this operation for their livelihood. And, our boys love the farm. If they have a day off school, they want to come here to work. If I took them away from this farm, that would be catastrophic."

Reding transitioned into a wheelchair in 2012, and he lost his ability to grip with his hands in 2014. The couple have benefited, however, from nearly seven years where his symptoms didn't worsen. That isn't true anymore.

"As of late, I'm seeing more symptoms than I was," Reding says. "I know it is (ALS) slowly progressing."

In the early evening at the Reding house in Hodgenville, Ashley says that Adam and Andrew are terrific about doing chores -- as well as laundry and cooking -- while helping take care of their father and mother.

"On my birthday, they came downstairs and got Aaron out of bed for me, dressed him and got breakfast ready," Ashley says. "I'm proud of them for their maturity but a little bit angry about what they've had to shoulder as children. Adam can't even remember Aaron ever walking, and Andrew barely remembers."

Even after he could no longer walk, co-workers would occasionally use a forklift to hoist Reding into the planter or combine for a ride-along. "I finally had to let that go," he says.

Asked about his legacy, Reding says he wants Homestead to be known as a farm that does things "the right way and treats landowners and employees fairly. I want to continue to provide and create opportunities for the next generation, whether that be our kids or those of family and employees."

When he began farming, Reding would pore over soil books and plat books from all the surrounding counties. "I'd see an area either on the maps or by driving around and think, 'Wow, that's a nice area.' I'd knock on doors to let them know I'm interested."

As time passed, and the farm's reputation grew, Reding had to do less soliciting. Landowners began approaching Homestead Family Farms. Even now, though, he doesn't mind dreaming about the potential of a piece of farmland.

"I still like looking at soil maps," Reding says, "and I still like making a few phone calls." 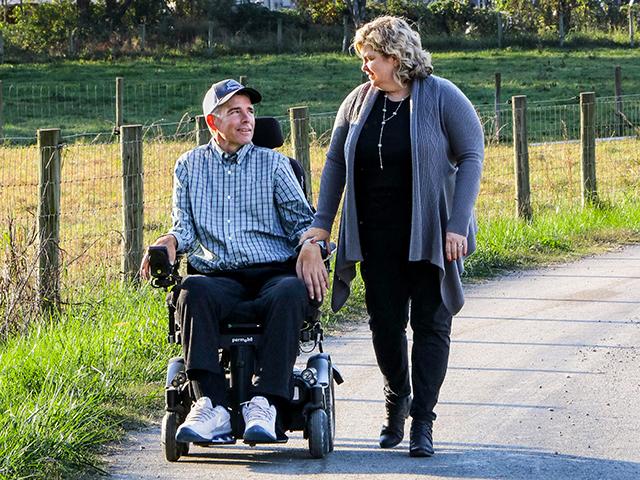