Averages are calculations which smooth out extremes. And in this report, extremes are notable when it comes to the groundwater situation in southwestern Kansas. In this area of the state, groundwater levels shrank on average by 2.2 feet in 2021, with a range of mostly 2 to 5 feet of decline; however, some local measurements indicated groundwater declines of as much as 10 feet during 2021. The southwestern Kansas decline was the largest since 2013 and follows a shrinkage of 0.8 foot (9.6 inches) in 2019 and 1.25 feet in 2020.

Drought impact is notable. KGS water-data manager Brownie Wilson noted in a survey summary report that 2021 was a second consecutive year for dryness in southwestern Kansas. "The key takeaway is that 2021 started off very dry and, outside of the month of May, which is the last month most folks in western Kansas saw any measurable precipitation, dry conditions continued right into the summer and fall months," Wilson said in the report. Southwestern Kansas moved into extreme drought on the Drought Monitor in mid-November 2021, and into exceptional drought in the southwestern corner during the first week of March.

The response to this groundwater decline is to pump more water from the Ogallala Aquifer for irrigating crops, pastures and hay fields. More irrigating, in turn, adds to the drawing down of the aquifer. On average, about 2.5 billion gallons of water are pumped out of the Ogallala Aquifer a day in Kansas; from 80 to 90% of that volume goes to irrigation, according to the U.S. Geological Survey (USGS). The Ogallala Aquifer in parts of Kansas, Oklahoma and Texas has already declined by more than 150 feet since pumping for irrigation began back in the 1940s.

Western Kansas is forecast to have drought persist through the 2022 summer along with above-normal temperatures. This combination suggests that further groundwater decline is likely.

A USGS report on the Ogallala Aquifer status is available here: 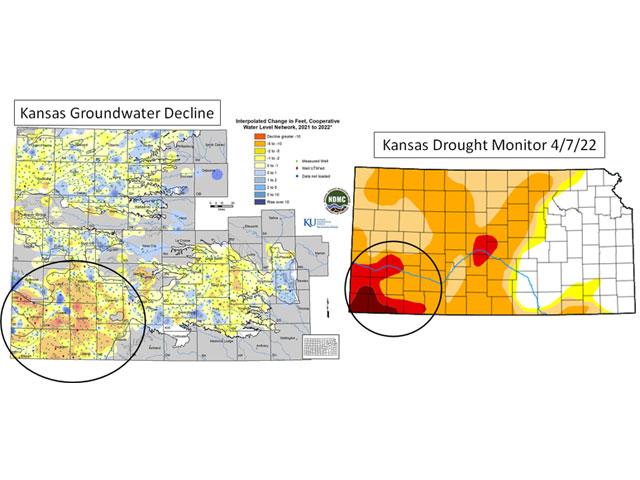